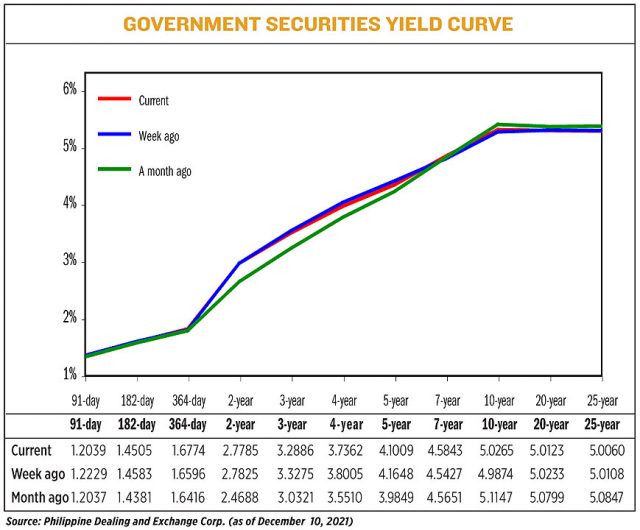 YIELDS on government securities (GS) mostly declined last week following the release of November inflation data, which showed the average rise in prices to be at a four-month low, albeit above market expectations.

GS yields fell by an average of 1.05 basis points (bps) week on week, based on the PHP Bloomberg Valuation (BVAL) Service Reference Rates of Dec. 10 published on the Philippine Dealing System’s website.

“Players were observed to be bargain hunting after November inflation eased to four-month lows. Although, the GS market continued to trade cautiously on the back of continued volatility in the US Treasuries market,” a bond trader said via Viber message.

“However, while rates adjusted lower from levels seen [the week before], bulk of activity remained focused on the new five-year retail Treasury bonds (RTB), which has traded at a slight premium,” Mr. Liboro said in an e-mail.

The BTr last week rejected all bids for its offer reissued 10-year T-bonds even as tenders reached P42.44 billion, more than double the P20 billion on the auction block.

National Treasurer Rosalia V. de Leon said all tenders were rejected because of the high rates, even as inflation reported earlier in the day of the auction eased to 4.2% in November, the slowest since July and the third straight month of slowing down.

Had the BTr fully awarded the bond offer, the tenor’s average yield would have declined by 5.9 bps to 5.071%. However, this would have been higher than the 4.99% quoted for 10-year bonds at the secondary market before the auction.

The November headline inflation print, despite being a four-month low, was higher than the 4% median estimate in a BusinessWorld poll and the Bangko Sentral ng Pilipinas’ (BSP) 3.3%-4.1% forecast for the month. This was also the fourth straight month inflation exceed the BSP’s 2-4% target for the year.

Meanwhile, the BTr sold P360 billion in five-and-half-year RTBs after a two-week offer from Nov. 16-26. Proceeds from the issuance will be used to fund the government’s pandemic response and recovery programs.

“Rates have already retraced slightly higher from the lows hit during the recent 5-year RTB’s offer period. As we approach yearend, we expect rates to consolidate at these levels with a slightly higher bias on the back of the upward trajectory in global yields and as the seasonal illiquidity kicks in,” Mr. Liboro said.

“Some catalysts we are watching for the week are the seven-year bond auction [on Tuesday] & the BSP’s Monetary Board meeting [on Thursday],” the bond trader added.

“While the central bank is expected to keep rates steady, the market will look for their updated inflation forecasts, if there will be any. Until then, yields are seen to trade range bound to wait for justified directional cues,” the trader said. — Lourdes O. Pilar