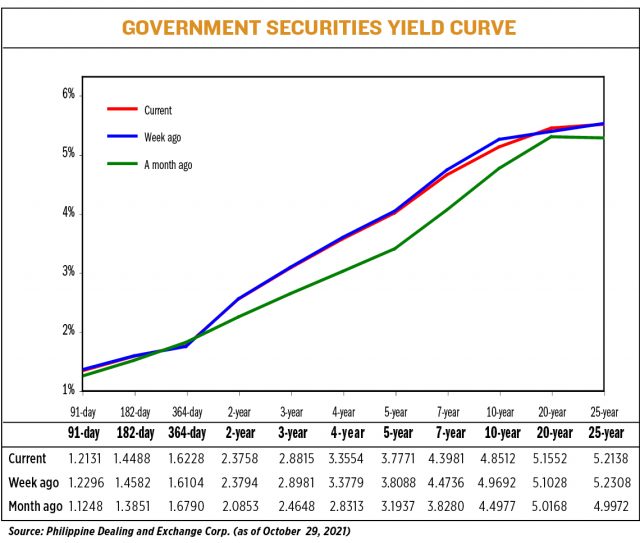 “Local bond yields moved range-bound on strong two way-interest week on week. After few weeks of heavy selling, the GS market finally found some reprieve after global oil prices and US Treasury yields showed some signs of stabilization,” a bond trader said in a Viber message.

“Market also took cues from the government’s seven-year issuance which the BTr (Bureau of the Treasury) partially rejected,” the bond trader added.

The BTr raised just P19.315 billion via the reissued seven-year T-bonds it sold on Tuesday, less than the programmed P35 billion, even as the paper attracted P57.215-billion worth of bids.

Bank of the Philippine Islands Lead Economist Emilio S. Neri, Jr. said via Viber that despite the BTr’s rejection of bids during last week’s auction, yields have remained elevated as the market is “aware that domestic inflation is bound to remain high” despite the government’s efforts.

“Elevated prices in oil and other energy markets combined with enduring supply concerns have fueled expectations that high inflation could be a lot more persistent than originally expected. We also continued to see more central banks (e.g., the Bank of Canada) hinting that they could hike rates much earlier than expected as inflation remains stubbornly high,” Mr. Neri added.

The Bangko Sentral ng Pilipinas (BSP) expects inflation to have settled between 4.5%-5.3% in October, above its 2-4% target and 4.4% forecast for the year. As of September, inflation averaged 4.5%.

The Philippine Statistics Authority is scheduled to release October inflation data on Friday.

“Any surprises on the inflation or hawkish rhetoric from monetary authorities around the world [this] week will likely affect the long end of the curve more. We expect the BSP to continue downplaying the October inflation print as merely transitory and will unlikely affect their policy setting in either their November or December meeting,” he added.

Mr. Neri said the absence of an interest rate hike means yields at the short end of the curve “will remain artificially low, just as economic fundamentals push other parts of the curve higher.”

“An [inflation print] above 5% might exert more upward pressure on yields,” he said.

The BSP’s next monetary policy meeting is scheduled on Nov. 18.

“All eyes are now on the FOMC (Federal Open Market Committee) meeting and the Philippine CPI (consumer price index) release for the month of October, where these risk events will set the tone of trading in the near-term,” the bond trader said.

“Until then, yields are just expected to move sideways with slight upward bias.”

(Re)building credit: The role of CIC and credit bureaus in the new normal