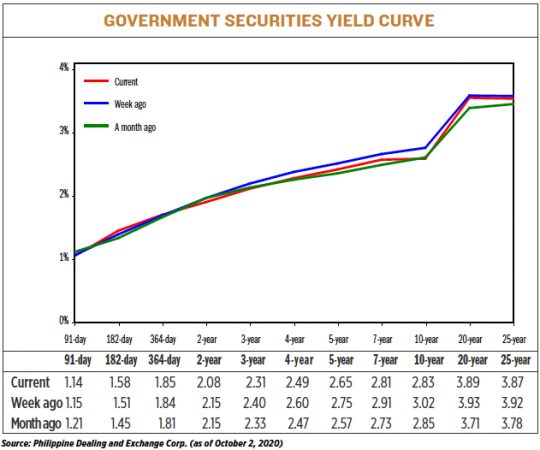 GS yields dropped by an average of 6.1 basis points (bps) week on week, based on the PHP Bloomberg Valuation Service Reference Rates as of Oct. 2 published on the Philippine Dealing System’s website.

He added the P540-billion cash advance approved by the MB for the National Government is a “huge boost to the markets” as it would lift some of the burden for the government to borrow from investors.

“[B]argain hunters opted to put cash to good use as inflation is expected to remain anchored within the government’s target of 2% to 4% for this year until 2022, as forecasted by the BSP after its MB meeting,” Mr. Palma said.

“[T]he BTr’s (Bureau of the Treasury) October borrowing plan was composed of relatively short-dated issuances, mitigating supply pressures in the long end of the curve. While the BSP move to hold interest rates steady was widely expected, the lower [inflation] forecasts for 2020 and 2021 kept a further cut in reserves on the table as the Governor stated,“ the trader said.

The Monetary Board on Thursday kept rates on the BSP’s overnight reverse repurchase, lending, and deposit facilities at record lows of 2.25%, 2.75% and 1.75%, respectively. It has cut borrowing costs by a total of 175 bps this year.

The BSP said inflation is expected to average at 2.3% this year, slower than its previous 2.6% estimate due to lower oil prices and slower-than-expected inflation rate in August. Inflation forecasts for 2021 and 2022 were also revised downwards to 2.8% (from three percent) and three percent (from 3.1%), respectively.

Meanwhile, the central bank on Thursday approved a P540-billion cash advance to the National Government.

This is the second loan granted by the BSP this year, bringing the direct provisional advances so far to P840 billion or P10 billion less of the P850-billion limit stipulated in Republic Act (RA) No. 11494 or the Bayanihan to Recover as One Act, which amended Section 89 of RA 7653 or The New Central Bank Act.

On the other hand, the Bureau of the Treasury earlier said it plans to borrow P140 billion from the domestic market this month, less than the P160 billion in September.

Both traders expect yields to trend lower in the coming weeks.

“[L]ocal bond yields may move range-bound with downward bias with the market to take its cue from the release of September CPI (consumer price index) data and the three-year FXTN auction that are both due on Tuesday,” Robinsons Bank’s Mr. Palma said.

For the bond trader: “[W]e’ll continue to see support in the short end and any movement in the other parts of the curve will depend on the BTr’s borrowing plan in the coming months.” — Marissa Mae M. Ramos