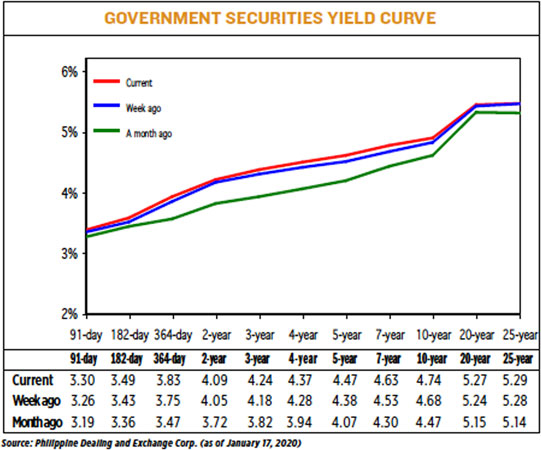 GS yields inched up by a week-on-week average of six basis points (bps), based on the PHP Bloomberg Valuation Service Reference Rates as of Jan. 17 published on the Philippine Dealing System’s website.

For his part, ATRAM Trust Corp. Head of Fixed Income Jose Miguel B. Liboro said: “Investors have switched to a more cautious mindset and have been trimming positions, pushing yields higher [last week],” on the back of “still-unknown” inflationary implications of the Taal Volcano eruption as well as the market speculation on the possibility of a retail Treasury bond issuance in the first quarter of this year.

The Taal Volcano in Batangas has been erupting since Jan. 12 and over 82,000 people have been evacuated. A 14-kilometer exclusion zone around Taal remains in place.

Socioeconomic Planning Secretary Ernesto M. Pernia estimated that Taal’s eruption is projected to book P7.63 billion worth of economic losses in Batangas alone as of Monday last week, which translates to 0.3% of total output of the Calabarzon Region — comprised by the provinces of Cavite, Laguna, Batangas, Rizal and Quezon.

Calabarzon had the second-largest contribution to the country’s gross domestic product (GDP) with a 17% share in 2018, after National Capital Region’s 36% share.

However, Department of Finance Secretary Carlos G. Dominguez said on Thursday that the inflationary impact of Taal Volcano’s activity will be minimal and manageable.

Meanwhile, the Bureau of the Treasury (BTr) raised P16.875 billion in T-bills out of its P20-billion program last Tuesday despite strong demand as rates went up across-the-board.

National Treasurer Rosalia V. de Leon said the government plans $3.7 billion in external borrowings this year, but has yet to secure approvals from the regulators.

She also said that the BTr will still consider selling retail Treasury bonds, as the sale of the debt papers will always be an option.

Offshore, the United States and China signed last Wednesday the “phase one” of its trade deal, inching closer to resolving its ongoing conflict over tit-for-tat tariffs.

Following the signing of the trade deal, US Vice-President Mike Pence said the discussions about the second phase of the pact between the world’s two largest economies are already on track, Reuters reported.

“For [this] week, local yields are still expected to increase due to optimism ahead of likely stronger Philippine economic growth report for the last quarter of 2019,” the bond trader said.

The Philippine Statistics Authority will report official fourth-quarter and 2019 GDP data on Jan. 23.

A BusinessWorld poll of 20 economists late last week bared a GDP growth median estimate of 6.4% for the fourth quarter and 5.9% for full-year 2019 amid strong household consumption and a rebound in government spending.

If realized, the estimate will be below the 6.2% growth recorded in 2018 and will miss the downward-revised 6-6.5% target set by the government.

For his part, Mr. Liboro said the outcome of the reissuance of seven-year bonds on Tuesday will determine market action this week.

“Given the cautious tone at present, investors are likely to bid at higher levels. The yield curve will reprice depending on where the auction clears,” he said.

“Should the BTr opt to reject the auction, we could see yields stabilize in the short-term and a slight move lower off the highs.”

The Treasury will auction off reissued seven-year debt worth P30 billion on Tuesday. The bond has a remaining life of six years and 24 days and has a coupon rate of 6.25%.

The government is looking to raise P1.4 trillion this year both from local and foreign sources to fund its budget deficit, which is expected to widen to as much as 3.2% of the country’s total output. — with Reuters