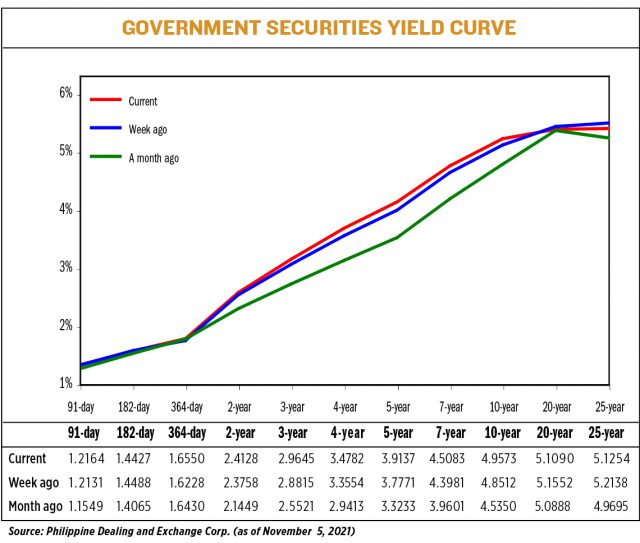 Yields on government securities (GS) increased by 4.46 basis points (bps) on average week on week, based on PHP Bloomberg Valuation Service Reference Rates as of Nov. 5 published on the Philippine Dealing System’s website.

A trader said debt yields inched higher after the Bureau of the Treasury (BTr) last week awarded T-bonds at a higher-than-expected rate.

“It didn’t help that market also anticipated the consumer price index data, which despite coming lower than expected failed to calm the selling pressure,” the trader said in a Viber message.

The government made a full award of the reissued T-bonds it offered on Wednesday as rates went up, with the market anticipating the result of the US Federal Reserve’s policy review.

The BTr raised P35 billion as planned via the reissued five-year T-bonds with a remaining life of four years and five months.

Tenders reached P46.65 billion, higher than the offer but lower than the P56.08 billion in bids fetched the last time these debt papers were auctioned off on Oct. 12, where the government made a full award.

Meanwhile, inflation eased to a three-month low in October amid a slower increase in food prices, the Philippine Statistics Authority (PSA) reported on Friday. Headline inflation settled at 4.6%, slower than the 4.9% median estimate of 21 analysts in a BusinessWorld poll.

The October figure was slower than the 4.8% in September, but faster than 2.5% a year earlier. Still, this was the third straight month inflation exceeded the 2-4% target of the Bangko Sentral ng Pilipinas (BSP) for the year. Inflation has topped the BSP target this year except in July.

This brought headline inflation for the first 10 months to 4.5%, faster than the 4.4% forecast by the central bank for the year.

The market also priced in the policy meeting of the Federal Open Market Committee last week, where it announced its plan to start reducing its monthly asset purchases, as expected, another trader said.

“There was some caution ahead of the US Federal Reserve policy meeting,” the second trader said in an e-mail.

The Fed on Wednesday announced it will start reducing its monthly Treasury asset purchases, although it maintained policy rates near zero. Both are in line with market expectations.

For this week, yields could continue to rise ahead of key local and US data.

“Local yields this week are seen to move with some upward bias as the likely stronger US consumer and producer inflation reports might reinforce more hawkish views by market participants,” the second trader said.

“This upside, however, might be limited due to some market caution ahead of the third- quarter Philippine (gross domestic product) growth report,” he added.

Third-quarter GDP data will be released by the PSA on Nov. 9. A BusinessWorld poll of 18 economists yielded a median estimate of 4.65% for third-quarter GDP growth. If realized, this would be slower than the 11.8% expansion seen in the April to June period but better the 11.5% contraction in the same period last year.

Analysts said the lockdown imposed amid the fresh surge in coronavirus cases due to the Delta variant last quarter likely dented growth.