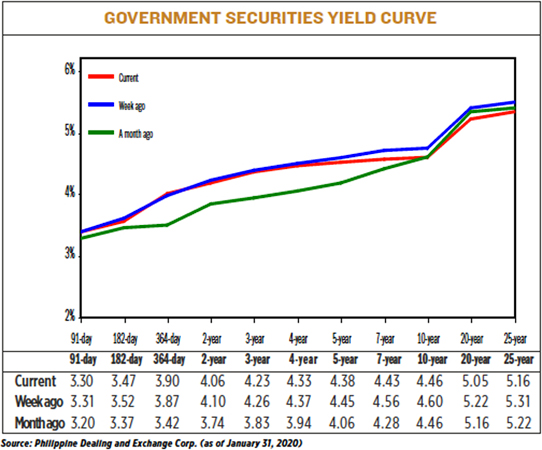 YIELDS ON benchmark government securities (GS) dropped last week amid continued concerns on the impact of the novel coronavirus acute respiratory disease (2019-nCoV ARD) on the global economy, dovish statements from the US Federal Reserve and the market’s anticipation of further rate cuts by the Bangko Sentral ng Pilipinas (BSP) this year.

Bond yields, which move opposite to prices, fell by an average of 7.2 basis points (bps) week on week, according to data on the PHP Bloomberg Valuation Service Reference Rates as of Jan. 31 published on the Philippine Dealing System’s website.

“Local yields fell broadly, mainly driven by market fears over the possible economic impact of the novel coronavirus to global economic activity. Moreover, yields likewise declined following dovish remarks from the Federal Reserve with its strong commitment to bring US inflation within the two-percent target,” a bond trader said in an e-mail interview, noting the declines were “amplified toward the long-end of the yield curve.”

“Yields were down across-the- board [last] week on speculation that the BSP will soon cut rates, and due to lower US Treasury yields,” Security Bank Corp. First Vice-President and Head of Institutional Sales Carlyn Therese X. Dulay said in a separate e-mail.

Ms. Dulay noted that yields also went down due to the “resounding success” of the government’s 23rd offer of retail Treasury bonds (RTBs).

The coronavirus outbreak started in Wuhan, China, with the death toll rising to 304 as of Feb. 1, with more than 14,000 cases recorded.

On Sunday, the Department of Health (DoH) reported the first 2019-nCoV ARD death outside of China, as another patient positive for the virus died on Feb. 1. This brought the confirmed cases in the Philippines to two.

The DoH said the first 2019-nCoV ARD fatality in the country was a 44-year-old man who traveled to the Philippines from Wuhan, China with the 38-year-old woman who was confirmed positive for the virus last week.

As of Sunday, the DoH said there are 36 persons under investigation for the virus.

Meanwhile, the Bureau of the Treasury awarded P134 billion worth of three-year RTBs at the rate-setting auction for the papers out of the total bids worth P149.827 billion. This was almost five times the initial offer of P30 billion, which prompted the government to upsize the acceptance.

The papers were quoted at a coupon of 4.375%, higher compared to the 4.25% coupon fetched for the three-year RTBs issued last April 2017 or RTB 3-08. Proceeds from the issue will be used for general budgetary purposes including the state’s critical infrastructure projects and social services.

The three-year RTBs are now being offered to the general investing public for minimum denominations of P5,000, with the public offer period set to run until Feb. 6, unless the Treasury closes it earlier.

On the other hand, BSP Governor Benjamin E. Diokno said the central bank is still looking to cut rates by at least 50 bps this year, with a 25-bp cut possible as early as this quarter.

The BSP’s Monetary Board will hold its first policy meeting for the year this Thursday. Its other review for the quarter is on March 19.

Mr. Diokno said the BSP’s policy decision will mainly depend on inflation and other data and need not follow the US Federal Reserve’s move to keep rates steady at their first review on Jan. 28-29.

For the bond trader: “Local yields might show an upward bias amid likely stronger local inflation report for January 2020, which might be offset by the impact of a possible policy rate cut from the BSP and likely weaker US labor reports.”

“The increase in yields, however, might be capped by lingering concerns over the novel coronavirus and rising bets of a US rate reduction this year,” the bond trader added. — Edwin C. Aruta, Jr.