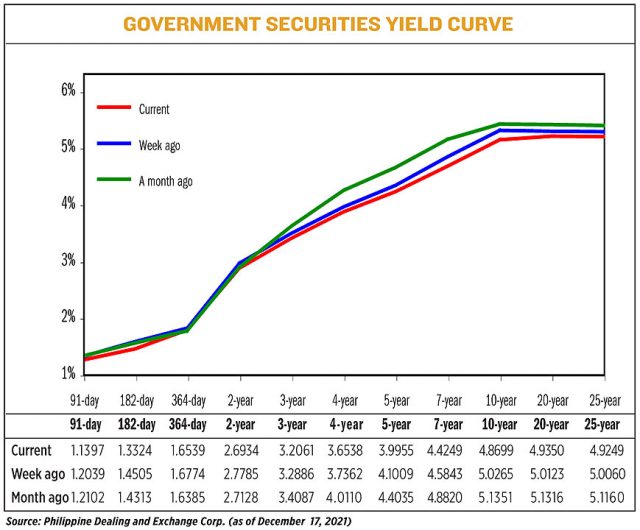 YIELDS on government securities (GS) fell across the board last week, with players taking their cue from auction results.

GS yields, which move opposite to prices, declined by 9.41 basis points (bps) on average week on week, based on PHP Bloomberg Valuation Service Reference Rates as of Dec. 17 published on the Philippine Dealing System’s website.

At the secondary market on Friday, yields on all tenors were lower compared with their week-ago levels.

“Local bond yields moved lower [last] week following another rejection by the BTr (Bureau of the Treasury) for its reissuance this month,” First Metro Asset Management, Inc. (FAMI) said in a Viber message.

“Amid the absence of supply this month and favorable US Treasuries trading heading into FOMC (Federal Open Market Committee), strong buying interest for bonds was seen [last] week,” FAMI added.

The BTr last week rejected all bids for its offer of reissued seven-year T-bonds even as tenders P52.267 billion, more than twice the P20 billion on the auction block.

Had it fully awarded its offer, the tenor’s average yield would have declined by 7.3 bps to 4.395% from the 4.468% fetched the last time the series was offered.

National Treasurer Rosalia V. de Leon said the government rejected all bids for the reissued bonds as there is room for rates to decline as inflation has eased, with the central bank also saying it would keep borrowing costs steady to support the economy.

The November headline inflation print, despite being a four-month low, was higher than the 4% median estimate in a BusinessWorld poll and the Bangko Sentral ng Pilipinas’ (BSP) 3.3%-4.1% forecast for the month. This was also the fourth straight month inflation exceed the BSP’s 2-4% target for the year.

Still, as expected, the BSP maintained benchmark rates at record lows at its final meeting for the year last week to support the economy amid the threat of the Omicron variant of the coronavirus disease 2019 (COVID-19).

Overseas, the US Federal Reserve on Wednesday said it will end its bond purchases — a key component of its quantitative easing program — by March, with officials expecting to raise rates three times next year as the US battles inflation.

“The BSP’s action to keep rates steady was widely expected…while the Fed’s faster tapering stance may have helped the profit taking during the latter part of the week along,” a bond trader said.

The bond trader said yields “will likely stay sideways” this week ahead of the holidays, although the market will be “cautious on developments regarding the Omicron variant and the damage caused by Typhoon Odette.”

“Yields will likely trade sideways as we approach the yearend due to lack of catalysts,” FAMI said.

“The uncertainties over the Omicron variant and upcoming Fed liftoff on one hand, will support demand for longer bonds and cause the yield curve to flatten,” it added. — B.T.M. Gadon

Yields on government debt climb on US Treasuries’ movement, inflation