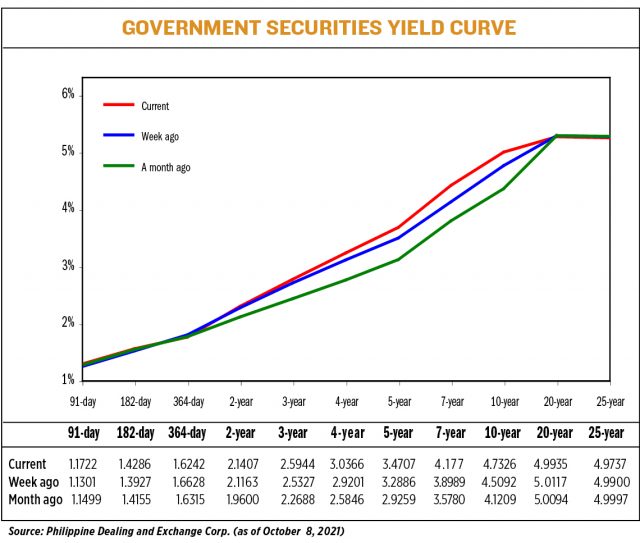 YIELDS ON government securities (GS) climbed last week following the result of the Treasury bond reissuance, the slower-than-expected September inflation data and the hawkish tilt of US Federal Reserve.

Bond yields, which move opposite to prices, rose by 8.10 basis points (bps) on average week on week, based on PHP Bloomberg Valuation Service Reference Rates as of Oct. 8 published on the Philippine Dealing System’s website.

“GS yields moved higher following relatively disappointing auction results from the Bureau of the Treasury (BTr) weekly bond auction in spite of the slightly lower-than-expected [consumer price index] figure from September,” Philippine Bank of Communications Senior Trader Justin Robert G. Ladaban said in an e-mail interview on Friday. “The rise in US Treasury yields also contributed to the overall defensiveness of the market.”

A bond trader said local yields moved in line with the hawkish sentiment from the US Federal Reserve as well as the lower-than-expected September inflation print.

“The inflation story is definitely back in the picture despite the fact that the recent inflation print is lower than expected,” the bond trader said in a phone interview.

September inflation eased to 4.8% from almost three-year peak of 4.9% in August after food and transport prices slowed, the Philippine Statistics Authority reported on Tuesday.

Average inflation for the first nine months reached 4.5%, above the central bank’s 2-4% target and 4.4% forecast this year.

The inflation data pushed rates higher during the auction later that day, prompting the Bureau of the Treasury to partially award the reissued seven-year papers worth P15.58 billion — less than half P35-billion program — despite attracting P52.79 billion in total bids.

The reissued seven-year papers, which have a remaining life of six years and 10 months, fetched an average rate of 4.207%, 38.1 bps higher than the 3.826% quoted when the series was last offered on Sept. 21.

Had the Treasury made a full award of its offer, the reissued bonds would have fetched an average rate of 4.276%.

Meanwhile, US Treasury yields increased on Thursday, with the 10-year note increasing by 4.7 bps to 1.5712% ahead of the September jobs report, which could pave the way for the tapering of the Fed’s $120-billion monthly bond buying program, Reuters reported.

Mr. Ladaban expects the same type of defensiveness to continue this week ahead of the Treasury’s offer of P35 billion in reissued five-year papers with a remaining life of four years and five months on Oct. 12.

“At this point, there could be some resistance at the 1.6% handle in the US 10-year note, but it could easily be broken given the momentum of the sell-off in the US bond rates,” the trader said. “But there is bias for local bonds to move higher also — specifically in the shorter-end, which is a little expensive compared to the long-end which has steepen quite a lot.” — Ana Olivia A. Tirona

Factory output expands for fourth month in a row