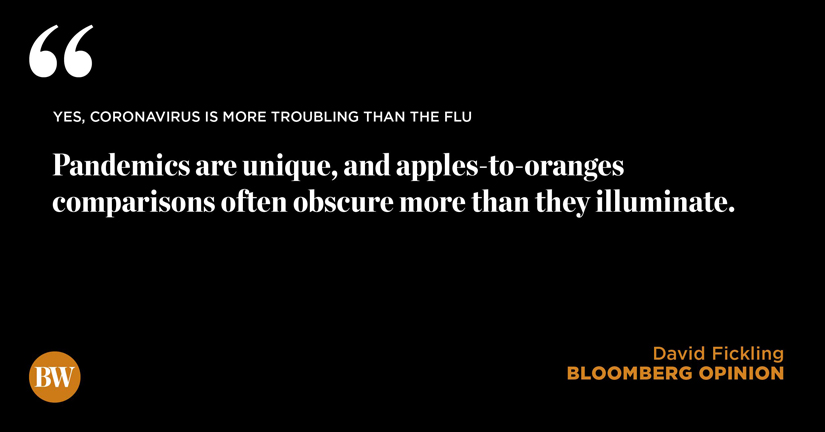 IS THE WORLD losing its collective mind about the coronavirus (now called COVID-19 by the World Health Organization)? So far 1,115 people have died from the infection — all but 45 of them at the epicenter of the outbreak in Wuhan province, and only two of them outside China.

By contrast, some 10,000 people have died this winter from influenza in the US alone, and worldwide between 290,000 and 650,000 people die each year from seasonal flu. H1N1 swine flu, which first emerged in Mexico and quickly spread across the globe, ultimately killed between 151,700 and 574,600 people in its first year alone. Instead of worrying about the progress of COVID-19 in China, shouldn’t we be asking about that public-health failure?

Well, no. Pandemics are unique, and apples-to-oranges comparisons often obscure more than they illuminate. The current coronavirus outbreak is legitimately more alarming than normal seasonal flu, and public-health officials are probably right to be responding with unusually drastic measures. Such actions shouldn’t be taken with every disease outbreak, though, unless we’re prepared to accept dystopian restrictions on basic freedoms as a routine part of life.

The most obvious difference between COVID-19 and influenza is that it’s considerably more deadly. The case fatality rates for most flu strains, including the pandemic ones like H1N1 that crop up every 25 years or so, tend to be in the region of 10 or 20 deaths for every 100,000 infections. COVID-19 appears to be several orders of magnitude more dangerous, with the equivalent of 2,359 deaths per 100,000 confirmed cases so far.

There’s considerable uncertainty about all these figures. Unlike with COVID-19, most cases of influenza aren’t laboratory-confirmed. That could mean we’re exaggerating the odds of dying from the current outbreak, because we’re measuring deaths only as a proportion of people whose symptoms were severe enough to merit testing.

The extraordinary burden being placed on the health system in Hubei may also be skewing things. More than 3% of cases there have resulted in death, but downriver in Zhejiang there have been no fatalities despite 1,117 confirmed cases. Across China outside Hubei, the fatality rate is around 0.4%. It’s possible that the triage being undertaken by hard-pressed Hubei doctors means they’re only taking in and confirming the most serious cases.

There’s also the possibility that fatality rates are too low. COVID-19 has spread with extraordinary speed, and to date nearly 90% of cases have resulted in neither recovery nor death. If we see increasing mortality from that population over the coming weeks, it may be the case that fatality rates were low simply because people hadn’t died yet.

It’s hard to point with certainty to any rock-solid facts amid this thicket of hypotheses and estimates — and that’s precisely why public-health officials, in China and elsewhere, are now taking this outbreak so seriously. On one hand, coronavirus might fizzle out in weeks or months as the measures currently being taken gain traction. On the other, it might grow into a pandemic that infects 60% of the world’s population, according to the Guardian, likely resulting in millions of deaths.

The brutal truth of epidemics is that in their initial stages there’s no magic bullet to preventing them. New vaccines can’t be developed overnight. The regulatory burden of getting them approved in multiple countries and the manufacturing challenge of producing them are, if anything, bigger bottlenecks than the laboratory work. After enormous efforts to expand pandemic influenza preparedness, in 2015 the world still only had enough production capacity to immunize about 43% of the global population.

Basic hygiene practices such as hand-washing, mouth-covering, and simply staying home will certainly help, too — but beyond that, the sort of quarantine we’re seeing in China is one of the few preventative measures at hand.

The advance of vaccines and antibiotics over the 20th century meant that so-called community quarantine — where entire populations are isolated to prevent the spread of disease — had largely died out as a public-health measure before it came roaring back with Severe Acute Respiratory Syndrome in 2003.

It’s still often controversial. Riots broke out in Liberia when community quarantine was imposed during the Ebola epidemic of 2014. While surveys in Asian and North American countries suggest reasonable levels of support for the practice, that tolerance no doubt has its limits.

It’s unclear if the world is ready for a situation where draconian restrictions like those being used in China become more commonplace. Governments and health officials need to reckon with that possibility, though. Epidemics thrive on large, dense populations. With 7.8 billion people and 21 billion livestock on the planet, we’re providing novel infections an ever-improving environment in which to spread.