A BARRAGE of shocks is building that’s unlike anything emerging markets have had to confront since the 1990s, when a series of rolling crises sank economies and toppled governments.

Turmoil triggered by rising food and energy prices is already gripping countries like Sri Lanka, Egypt, Tunisia and Peru. It risks turning into a broader debt debacle and yet another threat to the world economy’s fragile recovery from the pandemic.

Compounding the danger is the most aggressive monetary tightening campaign the Federal Reserve has embarked on in two decades. Rising US interest rates mean a jump in debt-servicing costs for developing nations — right after they borrowed billions to fight COVID-19 — and tend to spur capital outflows. And on top of it all: the stark reality that war in Europe, which is driving the latest food and energy shock, shows few signs of ending. 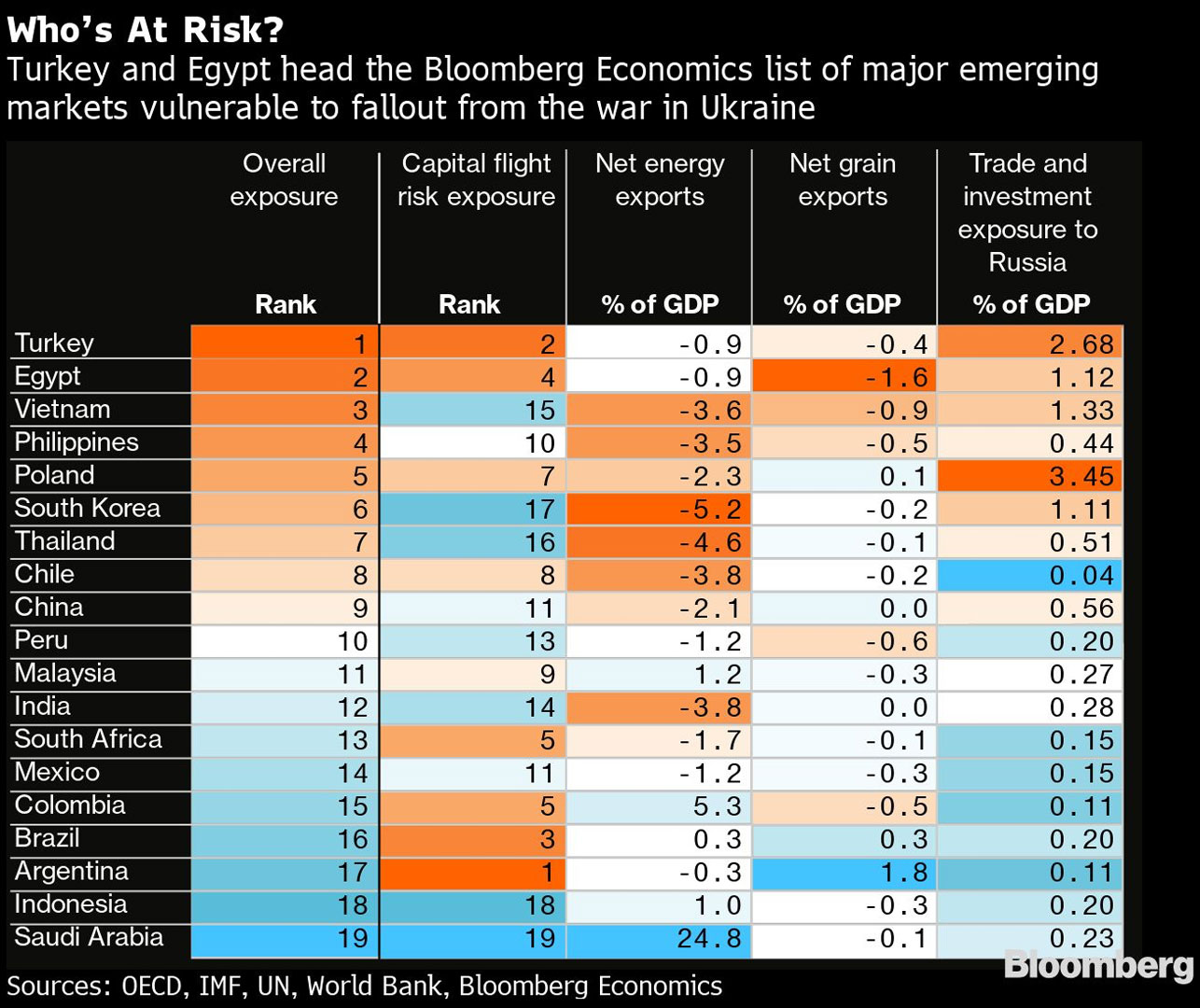 The cocktail of risks has already pushed Sri Lanka to the brink of default on its bonds. A handful of other emerging economies, from Pakistan and Tunisia to Ethiopia and Ghana, are in immediate danger of following suit, according to Bloomberg Economics. Of course, the developing world’s commodity exporters stand to benefit from higher prices. Still, there are other troubles brewing, with a new COVID-19 outbreak locking down key cities in China, and growing angst that Europe and the US will fall into recession.

The world’s top economic policy makers are sounding the alarm. The dominant themes at the spring meetings of the International Monetary Fund (IMF) and World Bank in Washington this week are a slowing global economy and the rising risks —  seen and unseen — facing developing nations.

The IMF, in its latest World Economic Outlook, likened the war’s impact to “seismic waves” rolling over the global economy. It also warned of the possible return in emerging markets of the sort of “doom loop” that led Russia to default in 1998, helped bring Vladimir Putin to power and took hedge fund Long Term Capital Management to the verge of collapse. The World Bank slashed its global growth forecast and announced the creation of a $170-billion rescue package — bigger than its COVID-19 response — for crisis-hit nations.

“We can see this train wreck coming towards us,” said John Lipsky, who spent half a decade as No. 2 at the IMF. The combination of real-economy shocks and financial-market tightening, he said, is “going to push a large number of low-income countries into the need for debt restructuring.”

The biggest default looming in emerging economies is in Russia, where Mr. Putin’s decision to invade Ukraine has brought sanctions, economic isolation, and a pledge to pay debts only in rubles — which would likely be ruled a breach of commitments, triggering losses for investors.

Still, Russia’s role as the sanctions-hit aggressor make it a unique case. Which means Sri Lanka, for now, is at the vanguard of the potentially broader crisis.

The country’s currency is down nearly 40% this year. Last week, it suspended foreign debt payments, deciding to use what’s left of its reserves to cover food and energy imports rather than pay investors.

For people like Jagath Gunasena, the crisis has already arrived. It’s meant sending his wife and son to stand for hours to refill the cooking-gas cylinder they need to run their Colombo food stall — only to see them turned away when supplies run out. “At least we have leftovers from our food stall to eat,” Mr. Gunasena said. “I don’t know how the others will find ways to cook or get by.”

That kind of uncertainty has driven protesters to call for President Gotabaya Rajapaksa to resign even as his government tries to negotiate help with the IMF and Asian powers like China and India.

Sri Lanka may be the first. But it’s not alone. Some 13 emerging countries have bonds trading at least 1,000 basis points above US Treasuries, up from six a year ago. Credit-default swaps on developing-country debt spiked in the first weeks of the Ukraine war, showing a growing fear of default — and while they’ve since retreated, they’re still some 90 basis points above last year’s average.

Bloomberg Economics, which keeps scorecards of the building risks for EM countries, puts Turkey and Egypt top of the list of major emerging markets exposed to “economic and financial spillovers” from the Ukraine war. And it ranks Tunisia, Ethiopia, Pakistan, Ghana and El Salvador — with large debt stocks and borrowing costs that have risen by more than 700 basis points since 2019 — among countries in immediate danger of being unable to repay debts.

‘START TO SURFACE’
The direct impact of a default in five countries such as these on the global economy would be small, but crises in the developing world have a history of spreading well beyond their starting points. “In a cascade of emerging-market credit events, the negative impact of the whole could be larger than the sum of the parts,” wrote Ziad Daoud, Bloomberg Economics’ chief EM economist.

The World Bank calculates 60% of low-income countries are in debt distress already, or at high risk of it. So far, the trouble is brewing in the sort of “off the radar screen” places investors don’t pay much attention to, said the Bank’s chief economist, Carmen Reinhart.

Governments all over the emerging world stepped up their borrowing to cushion the pandemic’s impact. The cost of servicing those debts is rising “on a steep incline,” according to the IMF.

A record amount of that debt is now held on balance sheets of local banks in emerging economies, according to the IMF — raising the risk of a feedback loop in which banks are forced to pull back on lending as economies slow and the value of the government bonds they own falls. Which in turn may lead to the sort of economic “doom loop” that drove Russia to default in 1998 and Argentina to a similar fate a few years later.

The increase in borrowing costs is likely to get steeper still as the Fed’s efforts to combat inflation at home lead to higher interest rates on US Treasuries, the benchmark for many developing economies. Central banks across much of the emerging world are raising their own policy rates too, as prices surge.

Jim O’Neill, the former Goldman Sachs economist who coined the term BRICs in the early 2000s to describe the then fast-growing emerging markets of Brazil, Russia, India and China, said the current environment is the most uncertain he’s seen since he began his career in finance in the early 1980s. “If we get the inflation risk persisting and central banks have to tighten policy, for certain emerging markets it will be a disaster,” he said.

One sign of trouble ahead is the lengthening line of countries in rescue talks with the IMF.

Along with Sri Lanka, it includes countries with similar balance-of-payments problems like Egypt and Tunisia, where food prices helped drive regime change just a decade ago.

To be sure, many developing nations sell more commodities than they buy, and benefit from rising prices. They’re typically a boon in regions like Latin America, for example — where Brazil’s real is the world’s best-performing major currency this year, and Chile’s exports in March were up more than 20% from a year earlier.

Robin Brooks, chief economist at the Institute for International Finance, predicts the fallout from the Ukraine war will largely be limited to food and energy importers.

Busts often follow booms — and there haven’t been many of the latter in an emerging world that’s had a rough ride from COVID-19, Brooks points out. By contrast, the crises of the 1990s erupted in economies where capital had been pouring in, and its abrupt departure revealed flaws in corporate balance sheets. Even with risks rising because of an increasingly aggressive Fed, “I’m not as worried as others about skeletons in the closet,” he said.

But if that pandemic backdrop leaves emerging countries less vulnerable to capital outflows, the opposite is true when it comes to social tensions.

That’s one reason why it’s hard not to see something broader in the political and economic turmoil starting to hit the poorest corners of the global economy. Oxfam is warning that more than a quarter of a billion people could be pushed into extreme poverty this year. — Bloomberg