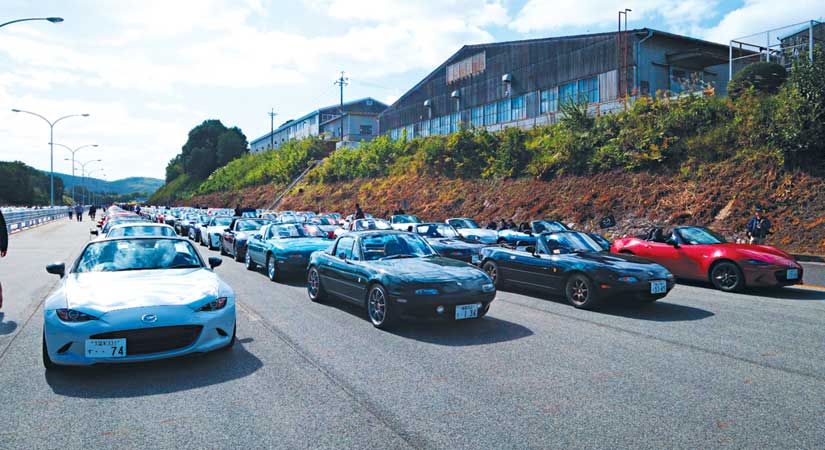 Text and photos by Ulysses Ang

SIGNS pointed out, “Welcome home [to] Hiroshima” around Mazda’s Miyoshi Proving Ground, sometime late last year. Here, around 2,300 MX-5’s descended onto the track in celebration of the roadster’s 30th anniversary; also in attendance were 102 members from the Miata Club of the Philippines and the MX-5 Club of Malaysia. There were other countries in attendance as well from Australia to Thailand to Italy to the United Kingdom, but none as big as the contingent from the Philippines.

This comes as a surprise since the MX-5 was deemed “impossible to sell” when the Japanese brand was handled by Columbian Autocar Corp. in the 1990s. It came to a point that if you bought a Mazda MPV, you’ll get an MX-5 for free. Literally, it was like they were telling you, “buy a car for your family, and you can reward yourself with a car for the weekends.”

This two-for-one scheme helped flush out the MPV and MX-5’s remaining inventory then, but little would anyone know that it will also sow the seeds for a strong and loyal MX-5 fanbase in the country. A year after the MX-5’s local market introduction, the Miata Club of the Philippines was founded.

Fast-forward to 2014, just as the world saw the newly introduced fourth-generation “ND” model, Mazda Philippines managed to snag 25 units of the outgoing “NC” decked out in special 25th Anniversary Edition garb. Limited to just 1,000 units worldwide, the Philippines accounted for 2.5% of the total run. At that point, everyone thought its distributor, Bermaz Auto Philippines, was crazy to gamble getting so much of these. It sold out in just three months.

Today, the fourth-generation model or “ND” is the best-selling MX-5 ever in the Philippines. With more than 650 units finding homes, it’s managed to outsell the first- (NA), second- (NB), and third- (NC) generations combined. It’s also made the Philippines the largest market of MX-5 in Asia outside Japan.

The number is still smaller than the likes of the Ford Mustang which sells an average of 400 units a year, but it’s nonetheless impressive considering its niche market. And with two body styles — a traditional soft top and a retractable fastback, and two transmission options, there’s an MX-5 for just about everyone.

Through all four generations of the MX-5 though, there’s its universality that’s made it such a successful sportscar for Mazda. Look at each and every MX-5, and it can trace its lineage directly to the first model that debuted in 1989. Since then, Mazda has produced more than one million examples while its competitors have all come and gone.

Also, by sticking to its basic formula, there’s no contempt that a generation is “less” MX-5 than another. The changes are borne out of improvements — more power, more rigid platform — but the same ingredients remain. By keeping it close to its founding ethos (even being produced at the same site in Hiroshima), there’s no debate if fancy electronics or a subcontracted car justify the storied badge. This is the reason why owners, young or old, men or women, can sit down together as family.

And Mazda will not be messing with the formula any time soon. What can everyone expect with the fifth-generation roadster, the “NE”? Something that stays true to the formula according to Mazda Motor Corp. Vice-President Kiyoshi Fujiwara. It’s something echoed by the MX-5 Chief Designer Masashi Nakayama who says it’ll be an evolution of the fourth-generation ND. With that, they introduced the fifth-generation MX-5’s Program Manager: Shigeki Saito. He has his work cut out for him, having to satisfy over 30 years of history. MX-5 fans around the world will surely like to see what he comes up with next, but for as long as he continues to celebrate driving, the roadster will be in very good hands.