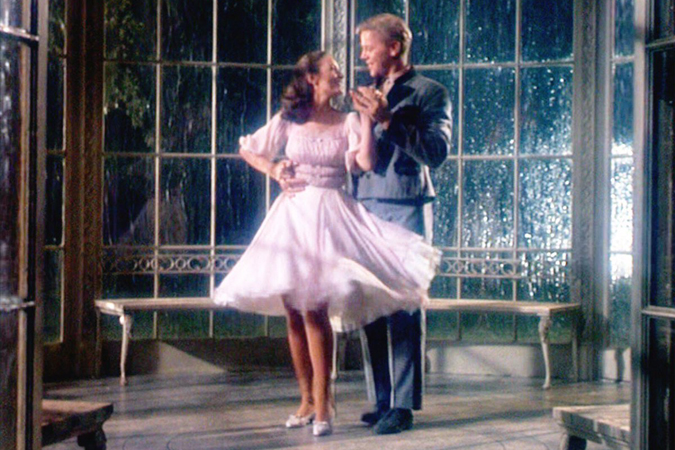 Today, of course, is Valentine’s Day. Unfortunately, this year, it fell on a Friday, which by some sad coincidence is also payday. Hopefully, Carmaggedon won’t rear its ugly head.

As it happens, the film version of The Sound of Music is celebrating its 55th anniversary this year. The movie contains many marvelous sequences, from the “Lonely Goatherd” to “Do-Re-Mi.” However, in today’s hook-up culture, cynicism, disdain for masculinity, and #MeToo into an oppressive fascistic silencing tool, “16 Going on 17” seems specially touching and yearnful.

The iconic segment actually starts not with the song but with this exchange:

Rolfe: Dear Liesl [narrating an imaginary telegram] “I would like to tell you how I feel about you STOP Unfortunately, this wire is already too expensive Sincerely, Rolfe.”

At that answer, Liesl (played by Charmian Carre) embraces Rolfe (Daniel Truhitte). They go on to talk of other things. Then Liesl says something that makes Rolfe tease her: “You’re such a baby!”

“You wait, little girl, on an empty stage

For fate to turn the light on

Your life, little girl, is an empty page

That men will want to write on.”

It’s easy to dismiss the song as mere musical “mansplaining,” of Rolfe lecturing about life to a “naÏve” Liesl, and how she needs him to survive. But the song’s composers, Richard Rogers and Oscar Hammerstein were not — thankfully — of this era.

Rogers and Hammerstein knew sexual politics, understood relationships, the ages, and — despite the sappiness and saccharine which the Sound of Music has been accused of — had a clear-eyed view of men and women.

That they conveyed the realism of the relationship between women and men in such an elegantly subtle manner is both the Sound of Music’s greatness and curse: ethereally hopeful but oftentimes impenetrable for today’s audiences.

There is no toxic cisgender masculinity here predatorily hunting a woman. If there was a “hunter” in “16 Going On 17” it was not definitely not Rolfe. Neither was it Liesl.

It was both of them.

On equal footing, each doing their part in a dance in accord with who they are: as woman and man.

One sees this in Liesl’s response to Rolfe’s condescension: “To write on…,” Liesl coos seductively at Rolfe. The latter backs off, disguising obvious nervousness by resorting to his supposed seniority. Naivety is indeed revealed but clearly it is not with Liesl.

Rolfe may have the years and physical strength on his side, but maturity is with Liesl.

And they knew what they were doing: both moving to an even more secluded and private gazebo to continue their courtship.

Rolfe was never in charge. It only seems so. For every childishly proud declaration by Rolfe, Liesl would lead him back to do the right thing — sometimes subtly with her demureness but overtly if needed.

One sees that in the dance’s latter part, Liesl standing on the benches looking down on Rolfe, the latter happily looking up at her. Adoring her.

There would be a part where Liesl brushes Rolfe’s hair and Rolfe loses himself in her. He was — literally — in Liesl’s hands.

The sequence would end with Liesl, her hand held by Rolfe, dancing carefreely around the gazebo’s benches, until finally, something interesting happens: they both find themselves standing on level ground, staring at each other. Drawn together, they come close face to face. They pull away but then end right back together. This happens a couple of times.

Then he kisses her.

But that’s the thing: it was the one act in the entire sequence where Rolfe actually took the lead. And he took the lead because Liesl wanted him to.

This is important because it establishes a point that whole millennia of women and men inherently understood but today’s generations seemingly can’t comprehend: there are women and men, that women and men are equal but different, and their differences are complementary to each other.

The song “16 Going On 17” dramatizes that perfectly: there are no victims, no oppressor: Liesl and Rolf were simultaneously leading each other and are being led by each other. That they can do so and it works because they were doing it as a man and woman.

If indeed one has to be finicky about it, the one showing that touch of frailty was Rolfe: unable to contain his emotion at the immensity of what just happened, their first kiss, he runs off grinning. Liesl stands put, looking after him, and also smiling. Both are happy.

In the end, we know that Liesl and Rolfe would be separated. Politics getting in the way.

But perhaps that’s another lesson: take the politics out and let men be men and women be women. And let the dance end as it should: of men and women completing each other.