The Department of Energy (DoE) released the Philippines Power Statistics 2020 this week and it shows some interesting data on the country’s energy mix. Installed capacity in 2020 has reached 26,250 megawatts (MW) or 26.25 gigawatts (GW), and the four biggest energy technologies are coal, oil-based, hydro, and natural gas. In actual electricity generation, the four biggest sources are coal, natural gas, geothermal, and hydro (see Table 1).

There are three interesting pieces of data here. One, coal constituted 42% of total installed capacity in 2020 but its actual power generation was 57% of the total. The big increase in coal generation came from the Mindanao grid starting 2016 (double the 2015 level) through 2019 (double the 2016 level). There are no longer daily “Earth Hours” and regular blackouts in Mindanao.

Two, oil-based plants constituted 16% of total installed capacity but contributed only 2.4% of total power generation. This is because they are mostly used as peaking plants, meaning they run only on peak demand hours and days, and are not base load plants running 24/7.

Three, the combined power capacity of biomass, solar, and wind in 2020 was 7.3% of total but their actual power generation was only 3.5% of total. They remain marginal and nearly insignificant power producers after more than a decade since the Renewable Energy (RE) law of 2008 (RA 9513) was enacted.

The anti-coal activists continue to bully the Philippines private energy companies and government agencies even if the Philippines is a minor coal producer compared to many countries. Our 58.2 terawatt-hours (TWH) of coal power generation in 2020 was what Vietnam and Malaysia produced four to five years ago, what Indonesia produced 14 years ago, what Taiwan and South Korea produced 24 and 27 years ago (see Table 2). 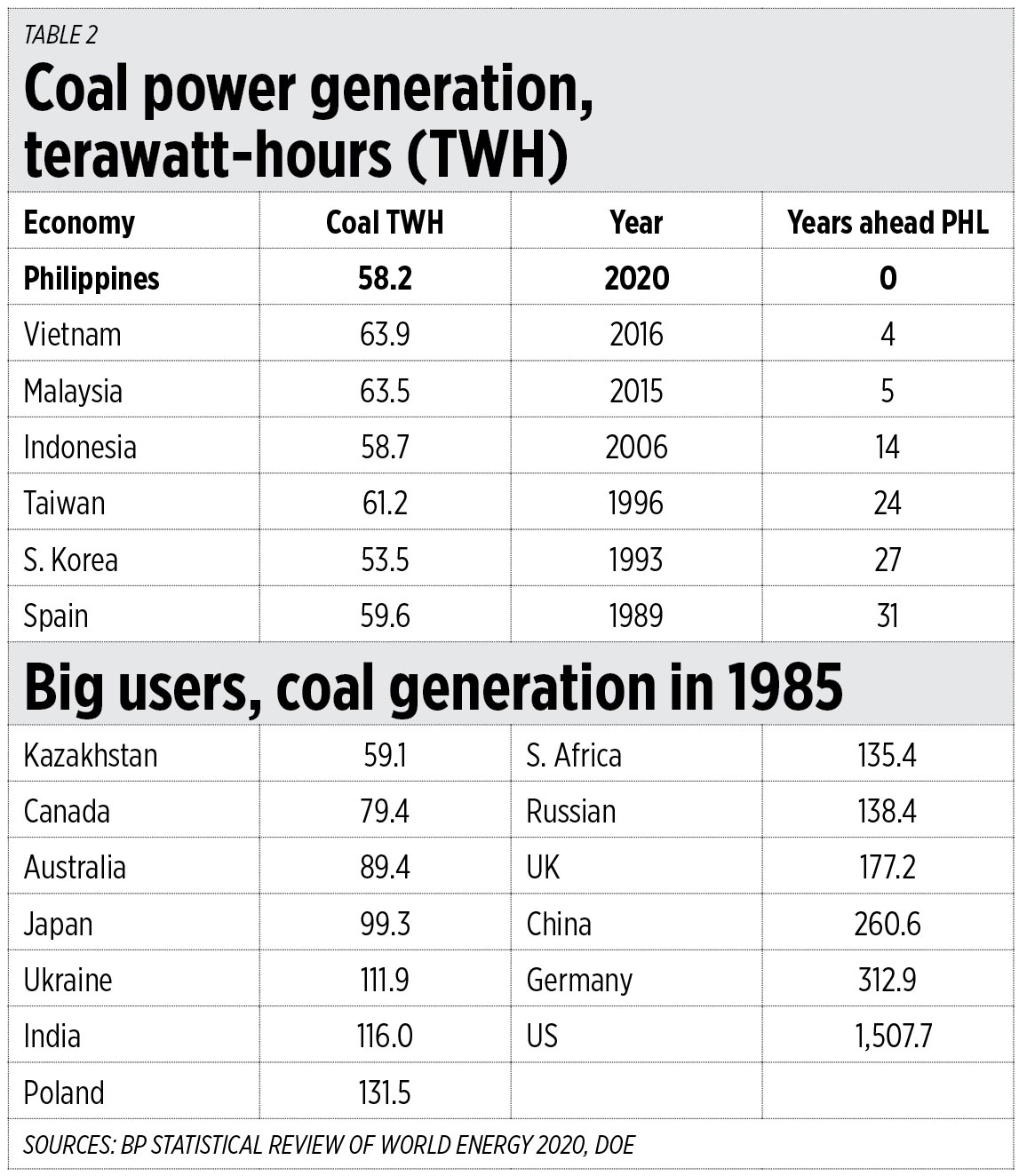 Last week I saw two press releases gloating over the cancellation of the Redondo Peninsula 600 MW coal project in Subic:

These are emotional statements based on rhetoric and not on actual energy realities. Here are three reasons why.

One, the anti-coal activists want full decarbonization of Meralco and other energy companies when actual data show that their favorite renewables — biomass, solar, and wind — will only assure us of large-scale blackouts as they contributed only 3.5% of total power generation in 2020.

Two, that Atimonan 1,200 MW ultra-supercritical coal project is a P160-B investment that can create lots of jobs and give the Philippines a very modern, efficient, and stable energy source.

Three, the real “dirty energy” are candles and gensets running on diesel, not coal plants. When you have frequent blackouts, the poor will buy candles (and risk more fires) while the rich will buy more gensets (which are more costly, more polluting).

A friend alerted me to one trend where some legislators become cozy with some rooftop solar companies seeking back channel subsidies in net metering. To avoid indirect subsidies, export energy should be at Wholesale Electricity Spot Market (WESM) rates while net metering customers should pay a minimum distribution charge to cover installed facilities, meter reading, etc.

Finally, here are three recent reports in BusinessWorld that caught my attention:

1. “Gov’t may expand role in power generation to build up reserves” (April 28),

2. “NPC sets minigrid, RE construction target of 5 megawatts this year” (May 2),

3. “House bill seeks to ban cross-ownership in power industry” (May 2).

Report numbers 1 and 2 show that the government may violate the EPIRA law of 2001 (RA 9136) where power generation has been transferred to the private sector to encourage more competition and discourage politics in the sector. Government power companies like the National Power Corp. (NPC) and the Power Sector Assets and Liabilities Management Corp. (PSALM) seem bent on staying around forever instead of fading away under the Electric Power Industry Reform Act (EPIRA).

Report number 3 shows that Bayan Muna continues its abolition-of-the-EPIRA agenda. A distribution utility can own power plants not necessarily to serve its needs but to supply power to various retail electricity suppliers (RES), electric cooperatives in other provinces.

EPIRA is not perfect but it remains a beautiful law. There is a clear division of function between the private sector as power generators and RES, and the government as regulator of power supply agreements and power pricing.

An optimal energy mix is one determined by the energy consumers themselves like the 2020 generation mix. Not by the government and legislators, not by leftist political parties like Bayan Muna, not by anti-coal activists who want to kill coal power competition and push RE favoritism and big gas companies shrewdly hiding behind a climate smokescreen.

A major ivermectin study has been withdrawn, so what now for the controversial drug?