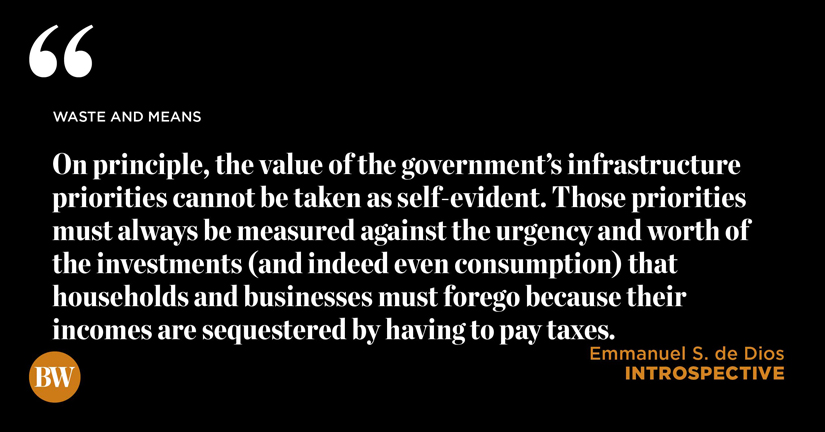 One of the bright spots of the economy under Duterte is said to be the rise in the investment ratio. In the last three years (2017-2019), the average proportion of investment to GDP approached 30%. Compare this with the previous six-year period (2011-2016) when the same ratio averaged 22%.

Conventional wisdom attributes much of this to the administration’s “Build, Build, Build” infrastructure drive. Indeed, the government under Duterte now accounts for 25% of total construction spending (versus 20% under Aquino, again using period-averages), which contributes 2.6% of GDP compared to 1.8% in the previous six years.

There is a halo around investment in the public mind — including among business people — that almost gives government carte blanche to spend on it. Indeed, infrastructure spending is the big cudgel the government uses to beat down those who object to its massive program of tax increases, even if these may weigh heavily on the poor or disrupt business. All debate and complaint is shut down once the sacred mantra of “Build, Build, Build” is intoned.

Above the sacred cow of investment hovers the notion that building roads and buying machines is “productive” in a way that other types of spending are not — as exemplified, say, by consumption by households (e.g., mundane food and clothing) or by government (e.g., folders and paper clips). Through taxation, government essentially lays its hands on money that households and firms would have spent one way in order to use it in ways government judges as more worthy and urgent.

It was J.R. Hicks however who gave the most generic definition of investment as “a use of current income to increase the production and consumption possibilities of the next period.” The simplicity of this statement shows up the imperfection and part-fallacy in the conventional definition of investment. Viewed through this fundamental lens, for example, what people spend on education or on medical care — both of which, after all, increase future capabilities and social productivity — are no less forms of investment than the government building a road or a bridge. For that matter, even foregoing income to preserve the natural environment might in principle qualify as a form of investment to the extent that (like keeping inventories) it expands the consumption possibilities of future generations. A more obvious value-comparison however is between a private investment project and a public one — say, between a new water treatment plant a private business might have built using profits from an “onerous contract” versus a government project that uses the confiscated profits to build a road to nowhere (more on this below). Both count as investments, but which is the more socially relevant? The point is that on principle, the value of the government’s infrastructure priorities cannot be taken as self-evident. Those priorities must always be measured against the urgency and worth of the investments (and indeed even consumption) that households and businesses must forego because their incomes are sequestered by having to pay taxes.

A second misconception about investment is the loose notion that its main value lies in stimulating the economy. When the government excuses its inability to meet its own growth targets (i.e., not hitting 7% even once), for example, it points to the failure to pass budgets on time, with a special tear shed for the delayed release of funds for infrastructure.

To be clear, however, there are two benefits from investment and particularly infrastructure spending: a Keynesian and a Smithian one. Like other forms of spending, government infrastructure investment raises current GDP immediately because it employs people and creates income. But it is not really unique in this function. The economy could just as easily have been stimulated by raising take-home pay or by reducing taxes on households or firms (i.e., by stoking household consumption or private business investment, or both). This spending effect is the reason Keynes sardonically suggested it would be just as effective a stimulus if government buried bank-notes in unused mine shafts, filled these with city garbage, and invited private business to dig them up “on well-tried principles of laissez-faire.” In short, spending to stimulate the economy does not even have to be productive or prudently chosen. The real distinction — recalling Hicks — between investment and other spending stimuli is that the former is undertaken not mainly to create income today but to raise income for the future.

So, just how good has infrastructure spending been in Duterte’s first three years? Was it based on the prudent selection of projects to implement in order to yield maximal social returns in the future? Or was it motivated primarily by a need to goose the economy in the short term by any means?

No final answer can be given at this point but facts and data and casual observation give enough grounds for concern.

First, some facts. Senator Franklin Drilon’s recent exposé revealed — and the government has not really denied — that only nine out of 75 of the administration’s originally planned major projects had even started more than halfway into Duterte’s term. Understandably, though this should have been anticipated, perennial problems such as right-of-way acquisition, the technical deficit in government agencies, political lobbying, and issues in bidding and contracting reared their ugly heads. The government subsequently “improved” its reported progress simply by drawing up a new list of “flagship” projects, dropping slow-moving ones and adding “less ambitious” and “more doable” ones and some already in progress. This effectively changes both numerator and denominator. Thus, rather than resolve to remove structural obstacles to major projects, the government simply changed its priorities to avoid those obstacles. Smart move.

Still, how does this square with the sizeable increase in public infrastructure spending noted earlier? Well, if it was not flagship projects that were moving, it can only mean projects of lesser importance and lower priority were those being implemented. Indeed, in lieu of movement in “game-changing” flagship projects, the government instead touts its spending on bread-and-butter items such as roads, bridges, and irrigation systems constructed or rehabilitated. All this is well and good in creating employment and prodding the economy today, but — remembering what investment is — how much more productive of future output are they?

Some statistics. A crude but readily available measure of the efficiency of investment is the incremental capital-output ratio (ICOR), which is roughly how much of an investment buck is required for a given bang in growth. On this measure, it turns out that investment during the first half of Duterte’s term has been the least efficient in producing growth (see Table). The ICOR of 4.7 for 2017-2019 is the highest it has been over the past 15 years. This strengthens the suspicion that, at least thus far, exigency and the need to shore up short-run growth has been the driving force of infrastructure spending. Keynes not Smith has been the patron saint of Build, Build, Build.

Or then again, take some casual observation. Bonny Serrano Street in Quezon City, runs alongside Camp Aguinaldo. There has since been a lane added to it. It is a fine, concrete addition. The only problem is that no vehicle can use it, since it was simply carved out of the camp grounds and leads nowhere. One must wonder how much extra social output this infrastructure has produced since it was completed. A similar infrastructure project can be seen on the stretch of Katipunan Avenue that runs behind the UP Diliman Campus. Again, an extra southbound lane has been added and cut out from UP land. Unfortunately, except for the odd tricycle and jeepney that makes a right turn on C.P. Garcia, that nice concrete road is largely unused since it ends in an asymmetrical bottleneck on the rest of Katipunan Avenue. Actually, without meaning to sound ungrateful coming from UP, the same question may be asked regarding the whole project of concrete-paving the lightly used internal campus streets. One must ask how urgent a priority that must have been in terms of increasing future output. (I can attest its effect on scholastic performance will not be that great.) Meanwhile, heavily used roads are only periodically, partially (and badly) patched with asphalt. Such examples can be multiplied country-wide. While all these projects undoubtedly raised current income, their impact on future output must be placed in doubt.

In Smith’s words: “In every such project, though the capital is consumed by productive hands only, yet, as by the injudicious manner in which they are employed, they do not reproduce the full value of their consumption, there must always be some diminution in what would otherwise have been the productive funds of the society.”

Emmanuel de Dios is professor emeritus at the UP School of Economics.