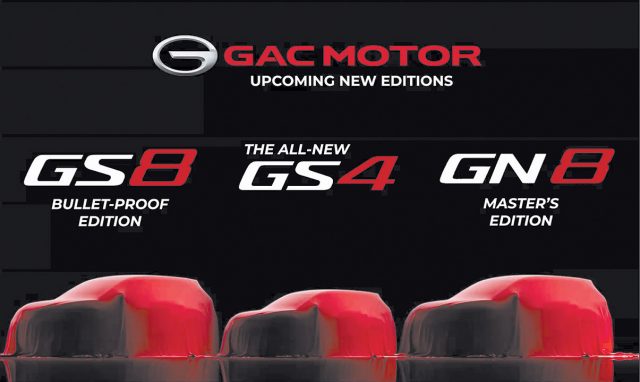 GAC MOTOR Philippines recently revealed the Chinese automaker’s “Go And Change Campaign,” which reflects the brand’s “new strategic direction of focusing on the technology and improvement of its craftsmanship.” It also said it is set to launch two additional vehicle variants soon, along with an all-new vehicle line.

Via an online media round-table discussion, the local distributor of the GAC emphasized how the brand commits to giving customers an enjoyable riding experience while delivering lasting value through its vehicles. “GAC Motor will continue to utilize its supply chain and manufacturing strengths in creating world-class technology that will also be used in conducting highly advanced research.”

The “fastest-growing Chinese brand” has begun a high QDR (quality, durability, and reliability) push that, among other things, called for the establishment of four research and development (R&D) centers located in Silicon Valley, Los Angeles, Detroit, and Shanghai. “These R&D Centers are responsible for the choice of premium materials and the technology used in the manufacturing of GAC vehicles,” the company said. Other R&D centers in various locations around the world will be developing artificial intelligence systems; autonomous, hybrid, and pure electric vehicles — “fueling its strong push towards electrification as it laid out plans on developing a lineup of electrified vehicles in the coming years.”

Legado Motors, Inc., official distributor of the GAC in the country, introduced the brand late in 2018 with the simultaneous launch of the GA4, GA8, GS8, GS4, and GN8. According to GAC Motor Philippines President Wilbert Lim, the brand has had a number of milestones since. In 2018, GAC Motor Philippines became the official escort of 2018 Miss Universe Catriona Gray. Following the opening of its pioneer and flagship dealership in Metrowalk, Pasig, the company welcomed customers to its second dealership in San Fernando, Pampanga in February 2019.

That year, GAC Motor Philippines made its debut appearance at the 2019 Manila International Auto Show (MIAS) in World Trade Center. “The event served as a perfect platform to showcase our vehicle lineup, and made the Filipinos familiar with the brand,” said Mr. Lim.

In the middle of the year, GAC Motor started operating its third dealership — this one in Tarlac City — then in October launched the GS3 crossover, which now is its best-selling model.

The company has been kept busy in other areas. “To prove the durability and reliability of the GA4 sedan, GAC Motor Philippines joined the 2019 Petron Kalayaan Cup on June 12, and won its first Endurance race championship…. The GAC Motor Racing Team proved that the GA4 is not only reliable on road, but also on the racetrack by winning the Open Class B and Manufacturer’s Class in the 2019 Petron Bonifacio Cup Endurance Race on Nov. 30, 2019,” continued the executive.

Even amid the pandemic, GAC unveiled the all-new GN6 MPV last February this year, and attained honors at the 2021 Petron Kalayaan and Kagitingan Endurance Cup. Added Mr. Lim, “As a way to stay connected with our customers in this time of pandemic, we’ve revamped our website and launched the GAC Motor virtual showroom, offering all-in-one dealership service right at their fingertips.”

Meanwhile, GAC Motor Philippines Product Director Brennan Lim revealed that the company will soon reveal new variants of three models. “We will be launching the bulletproof GS8, new GS4, and the GN8 Master’s Edition,” he said.

An ongoing nationwide promo is also serving up to P270,000 in discounts on all its vehicle models until Sept. 30.

A muted 2nd birthday for ‘Velocity’

Ford gets emotional with the ‘Ranger Life’