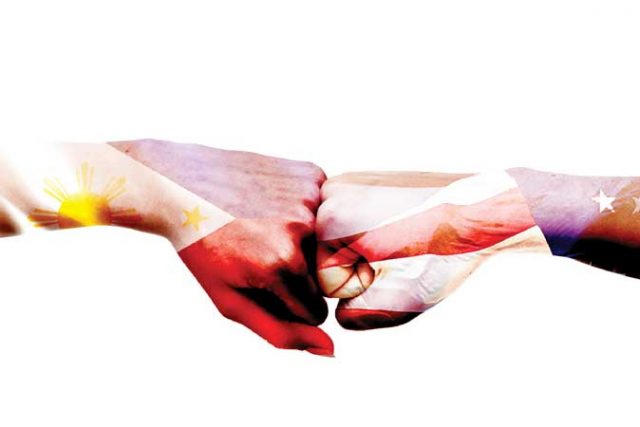 Romualdez, himself a member of the college class of 1970, readily consented to speak before the class and, more importantly, before others from different sectors. Certainly, everyone would benefit from Romualdez’s insights that he had formed in his four-year stint in one of the most critical posts in Philippine diplomacy.

Romualdez said that US-Philippine relations “has not always been without its highs and lows. Although the pandemic may have marginally affected the way diplomacy is done, through it all, what has remained constant is our two countries’ commitment (to each other). (This commitment) was further reinforced by President Biden when he wrote President Duterte on the occasion of the (then two upcoming milestones). These milestones were the 75th anniversary of Philippine-American Friendship Day and of the establishment of diplomatic relations between the two countries. The other is the 70th anniversary of the signing of the Mutual Defense Treaty (MDT).

“In his letter, President Biden also assured that the United States will stand shoulder-to-shoulder with the Philippines to ensure both our nations’ security.”

In what appeared to be a justifiable proud moment of claiming at least some credit for the vastly improved relations between the two nations in such a short period during the Trump-Biden transition, Romualdez said, “I can say that in all the years that I have dealt with the United States, this has been the strongest statement that emanated from the White House on the US commitment to come to our defense especially in the context of the West Philippine Sea. The US has both rejected China’s maritime claims in the West Philippine Sea and reaffirmed the applicability of the Mutual Defense Treaty in case of an attack against us in that part of the globe.”

The desire to forge closer and warmer relations between the two countries is a natural reaction by the US to Chinese attempts to solidify its influence firmly in ASEAN on one hand, and an expression of its willingness to compete with China for influence in the Indo Pacific area, on the other. The conclusion that one makes is that if China did not create the trouble it is now making in the world stage, especially in the West Philippine Sea, the US would have probably depended on Pacific allies like Australia, Japan, and India to keep China in check.

The present struggle between the two superpowers has enhanced the strategic importance of the Philippines for both the US and China. The US wants to prove that it is still number one in all aspects of human activity, including and especially in terms of military might and reach. On the other hand, the communist Chinese party wants to make good its boast and propaganda taught in all Chinese schools that the boundaries of China go beyond Hunan, its southernmost tip. For China, the Philippines is a trophy which has tons of propaganda value. As far as China is concerned, the Philippines is “America right at its maritime borders” and acquiring and occupying these territories under their nine-dash-line is a victory worth savoring by all Chinese. By getting these territories and those claimed by Vietnam, Indonesia, and other ASEAN nations, they can say they have won the race against the US and have the West Philippine Sea in its huge trophy room. China has willing partners within the Philippines.

If we play our cards right in this battle for influence, this race should only serve to benefit the Philippines which wants to have its cake and eat it too. As a pragmatist in international affairs, we find absolutely nothing wrong with that above all, for the bottom line is protection of the country’s self-interest. And this exactly what countries like the US, the Philippines, and European Union do.

Like what all diplomats do, Romualdez did proclaim the country’s partnership with the US while sticking to the Duterte line of forging the closest relationship with China. To reassure our giant neighbor, Romualdez stated, “the Philippines will always work with its allies like the United States and other partners like China on shared concerns.” In what was a graphic way of dealing with the US-Philippines-China dynamics, Romualdez added, “We, the embassy, the consulates, and the Philippine government, will navigate the diplomatic scene to ensure that opportunities are maximized, and for the balance to be in favor of the Filipino people.”

Romualdez continued his presentation with a report on what the US has done to augment Philippine defenses, albeit another subtle message to the Chinese that minuscule it may be, our military is starting to strengthen itself with help from a longtime friend. “But more than coming to our aid, the US also helps us prepare to defend ourselves by beefing up our defense capabilities. In fact, we have received an offer from the US government to transfer five cyclone-class vessels that will help the Philippine navy patrol our maritime territory, particularly in disputed areas.”

In keeping with the upbeat tone of his report, Romualdez announced that after months of persistent and sustained efforts to bring US-manufactured vaccines to the Philippines, two million doses of AstraZeneca and 1.3 million doses of the Pfizer vaccines were delivered to Manila last May through the COVAX facility. The United States is the largest contributor to COVAX. He also reported that the country received its first Moderna vaccines “over the weekend.”

Romualdez talked of a variety of other aspects of US-Philippine relations like the tremendous contributions of Filipino frontliners during the pandemic; possible US investment in agriculture, infrastructure, technology, and other fields; Asian hate crimes, and immigration.

Aside from being very instructive and informative to many who joined the forum, Romualdez’s presentation showed a stark contrast between the sober and mature approach of Joseph Biden to diplomacy compared with his predecessor. While these differences in governance and leadership styles, directly impact Americans, the Philippines and the rest of the world will surely be able to use a period of sobriety and peace during this pandemic and be assured of the US commitment to help us deal with a violator of international law.

Philip Ella Juico’s areas of interest include the protection and promotion of democracy, free markets, sustainable development, social responsibility and sports as a tool for social development. He obtained his doctorate in business at De La Salle University. Dr. Juico served as Secretary of Agrarian Reform during the Corazon C. Aquino administration.

Sweeney Todd gets a modern tweak

Another retired general appointed to DSWD