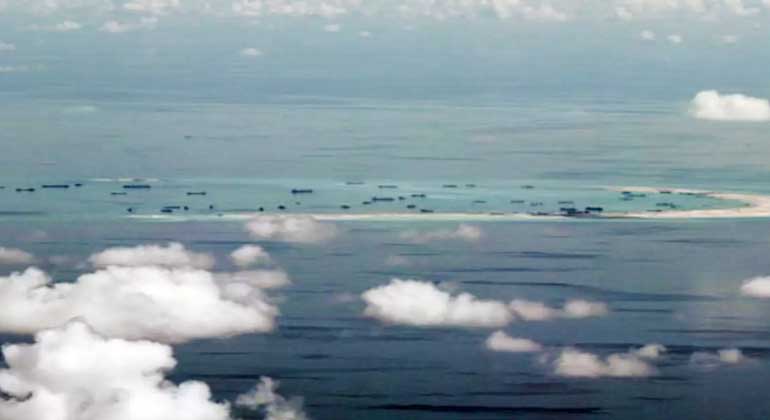 THE Philippines’ top diplomat on Monday said the presence of three US Navy aircraft carriers in the South China Sea had nothing to do with President Rodrigo R. Duterte’s decision to keep a military agreement with Washington on the deployment of troops for war games.

Three American aircraft carriers were patrolling the Indo-Pacific waters for the first time in nearly three years, a massive show of naval force in a region roiled by spiking tensions between the US and China, the Associated Press reported on June 12.

The patrol of the three warships, accompanied by Navy cruisers, destroyers, fighter jets and other aircraft comes as the US escalates criticism of China’s response to the coronavirus pandemic, its moves to impose greater control over Hong Kong and its island-building activities in the disputed waterway.

“No,” Philippine Foreign Affairs Secretary Teodoro L. Locsin, Jr. told the ABS-CBN News Channel when asked if the US patrols were linked to Mr. Duterte’s decision to suspend the termination of the visiting forces agreement.

“The United States is exercising its freedom of navigation in the South China Sea,” he said. “That’s an international right.”

Mr. Duterte this month suspended the termination of the deal “in light of political and other developments in the region,” according to its Department of Foreign Affairs (DFA).

The suspension of the 21-year-old pact is effective for half a year and may be extended by six more months, DFA told the US Embassy in a letter dated June 1.

The agreement provides the legal framework for the temporary presence of US troops in the Philippines.

Mr. Duterte in February officially informed the US he was ending the pact after the US visa of his former police chief who enforced his deadly war on drugs and who is now a senator was revoked. It was supposed to take effect in August.

The President suspended his decision to abandon the pact because “he saw that the tensions in the South China Sea were getting in the way of a united response to the COVID-19 crisis,” Mr. Locsin said.

He also said his agency and the Defense department were not behind Mr. Duterte’s decision.

“What it does is it lowers the tensions in the South China Sea” he said “The American side won’t feel that they have their backs to the wall and the Chinese will be actually, I believe relieved that the Americans will feel that way so we can then concentrate on COVID,” he added.

Meanwhile, he would have the time to work on arrangements in place of the defense pact, Mr. Locsin said.

Mr. Duterte has sought deeper trade and investment ties with China since he became president in 2016, in contrast to his predecessor who sued Beijing at an international tribunal and won. Critics have accused him of gambling with Philippine sovereignty in the process. — CAT