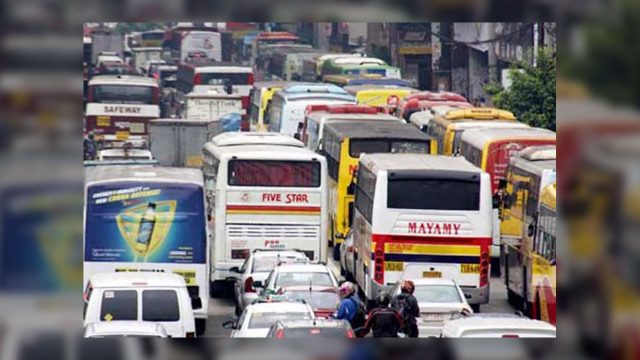 On Friday, the Move as One Coalition noted the lack of funding for road transportation in the budget of the Department of Transportation (DoTr) next year, and warned that transport workers will struggle to earn a living without service contracting.

“We should have a better balance (in funding)… If you invest in road transport now, the effects will be immediate,” Move as One Coalition member Reycel Hyacenth Bendaña said.

The DoTr said at a House budget hearing on Wednesday that it initially proposed P10 billion for a service contracting program which did not make it into the DoTr’s spending plan in the 2022 National Expenditure Program.

As initially proposed, the service contracting program was to pay PUV drivers a fixed income based on kilometers traveled instead of the number of passengers, along with a one-time incentive payout of P4,000.

The program was part of the Bayanihan II stimulus package, with P5.58 billion allotted to the DoTr. It was suspended on July 1, with the DoTr only having released P1.5 billion, after the validity period of the law expired. It resumed on Sept. 10 after P3 million was allotted for service contracting under the 2021 General Appropriations Act.

Ms. Bendaña said that the slashed budget for service contracting in next year’s transport budget will lead to hardship for both drivers and commuters as operations continue to be limited to 50% of passenger capacity because of physical distancing rules.

“We see commuters still struggling to find transport services because there is a lack of (PUVs) operating. We see transport workers who lack money to give to their families because there are limited to no passengers (on the road),” she said.

Ms. Bendaña said that while legislators like Samar Rep. Edgar Mary S. Sarmiento have recommended to restore the program’s budget to at least P3 billion for next year, she was batting for much more funding.

In a study for the 2022 National Budget released on March, the Move as One Coalition recommended P75.84 billion for service contracting to cover as many routes and drivers nationwide.

The Move as One Coalition has said in a separate study that even if the current rail projects are built on schedule, it estimates a shortage of around 2.8 million trips daily in the National Capital Region by 2030.

“It goes to show that our current methods are not working and if we continue the current ratio of investment to relieve congestion and make movement and mobility better, it’s not going to work,” Ms. Bendaña said.

DELAYED PAYMENTS
Land Transportation Franchising and Regulatory Board Chairman Martin B. Delgra III said via Viber Friday that it has sent credit advice to the Land Bank of the Philippines (LANDBANK) of P1.037 billion for payments to qualified PUV drivers under the service contracting program.

He said earlier during the House hearing Wednesday that President Rodrigo R. Duterte has also approved the release of P3.38 billion worth of unused Bayanihan II funds for drivers hired under the service contracting program, and hopes to release the payments within the next two or three days.

“We received the checks late Tuesday evening (and) started on giving credit advice to LANDBANK (Wednesday) to crediting the accounts of the payees out of the P3.38 billion that we received,” he said.

Payments will be made through operators’ LANDBANK accounts and other outlets via InstaPay or PESONet.

However, Ms. Bendaña doubts that the P3.38 billion will be released promptly as extra steps are needed to verify the eligibility of operators and drivers in the case of the P1.5 billion allotted before the Bayanihan II funds initially expired.

“Instead of slashing the budget, we should challenge transport agencies like the LTFRB to do better. Why do the commuters and transport workers have to suffer (when) agencies are not delivering effectively,” she said.

Magnolia Hotshots thrilled to be back in the PBA finals

Landmark 75th season of the NBA tips off this week

US property market in ‘chaos’ as laws waived on rent, debt payments