By Keisha B. Ta-asan, Reporter

MONEY SENT HOME by overseas Filipino workers (OFWs) jumped 4.3% year on year in August, as migrants took advantage of the peso’s weakness against the US dollar.

Data from the Bangko Sentral ng Pilipinas (BSP) showed cash remittances sent through banks stood at $2.72 billion in August, higher than the $2.60 billion a year earlier. The growth in remittances was the fastest since 4.4% in June.

However, the amount of cash sent home by migrant Filipinos was the lowest in three months or since the $2.43 billion in May. 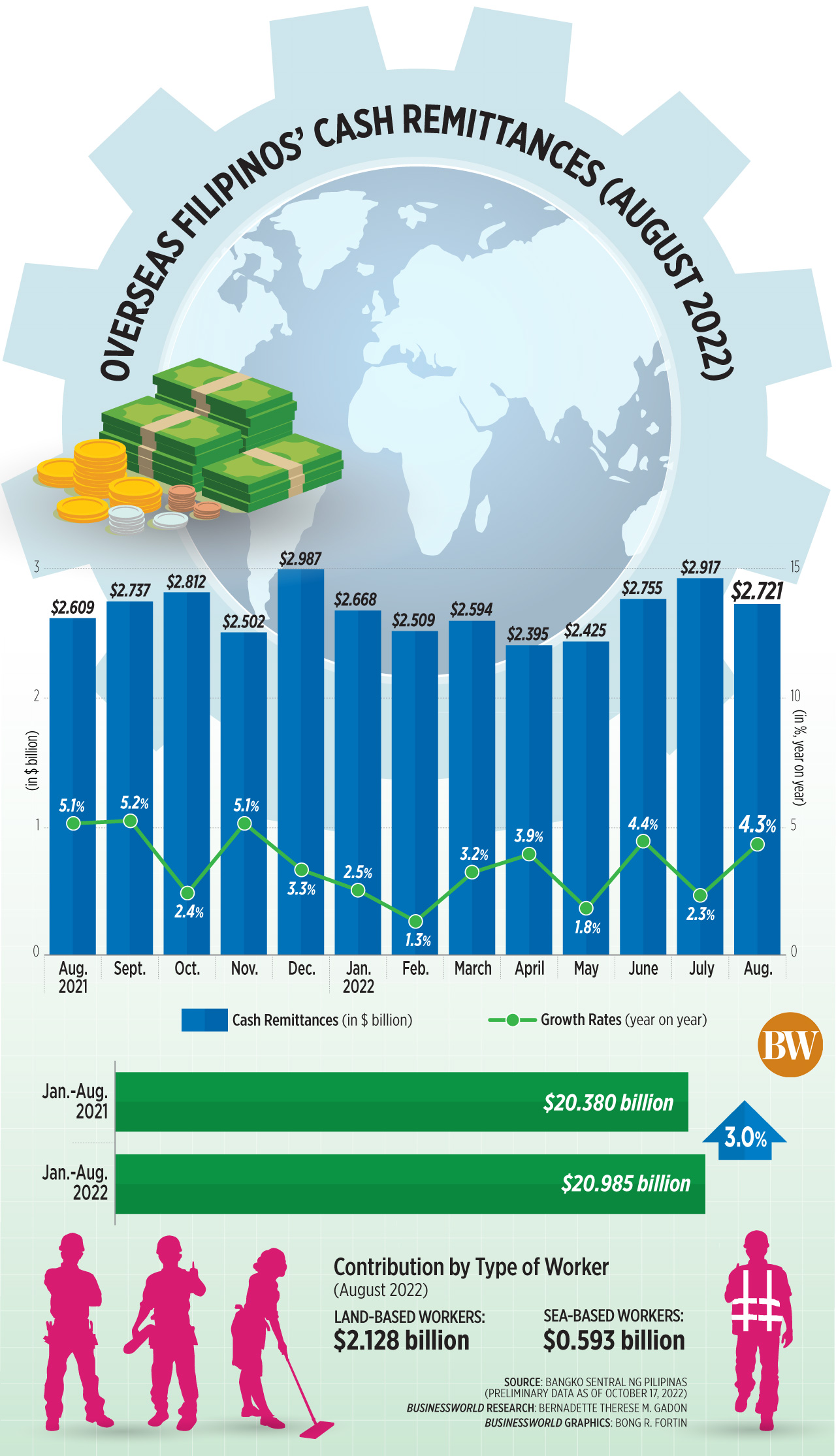 “The expansion in cash remittances in August 2022 was due to the growth in receipts from land-based and sea-based workers,” the BSP said in a statement on Monday.

China Banking Corp. Chief Economist Domini S. Velasquez attributed the increase in remittances to the improving economic conditions of some OFW host economies such as the United States, Singapore, and Middle Eastern countries.

“Better-than-expected economic conditions provided overseas Filipinos with reliable sources of income. On the contrary, difficulties in Europe have led to lower remittances sent year on year, notably in Germany and Italy,” she said.

The expansion in cash remittances during the January to August period was driven mainly by inflows from the United States, Saudi Arabia, Singapore, and Qatar.

Remittances from the top 10 countries accounted for 79.9% of the total during the eight-month period.

“In the home economy, i.e. Philippines, start of on-site schooling likely encouraged OFs (overseas Filipinos) in sending more money home. A high inflation environment in the Philippines could have also prompted them to help families left behind grappling with a cost-of-living crisis,” Ms. Velasquez said.

Headline inflation eased to 6.3% in August, from the nearly four-year high of 6.4% in July. It remained significantly higher than the 4.4% seen in August 2021.

“Additionally, OFs could have also made the most of the weaker peso for recipients to get more ‘bang for their buck,’” she added.

Filipino migrants may have been encouraged to send home more money as the peso continued to weaken against the US dollar.

“However, whatever gains OFWs and their families/dependents may have due to more peso proceeds for their US dollars/foreign currencies may be offset/negated by higher prices/inflation,” said Michael L. Ricafort, chief economist at Rizal Commercial Banking Corp.

Meanwhile, personal remittances, which include inflows in kind, increased 4.4% year on year to $3.02 billion in August.

This brought personal remittances 3% higher to $23.34 billion in the first eight months of the year.

“Moving forward, we expect remittances to stay positive but weak as the global economy slows down. Hopefully, we can see some healthy remittance inflows in the ‘-ber’ months which could also support the Philippine peso,” Ms. Velasquez said.

Remittances typically increase ahead of the holiday season, with the peak usually seen in December.

“For the coming months, OFW remittances and conversion to pesos expected to seasonally increase in (the fourth quarter), in preparation for the holiday season and spending, a consistent pattern seen for many years/decades; thereby could seasonally support the peso exchange rate especially towards the end of the year,” Mr. Ricafort added.

However, he noted a risk of recession in the United States as well as higher interest rates and inflation could affect OFWs in the coming months, potentially slowing down remittances.

The BSP expects remittances to grow by 4% this year.

Peso down on Fed bets after jobs data