THE UNEMPLOYMENT RATE inched up month on month in August, while job quality continued to worsen, the Philippine Statistics Authority (PSA) said on Thursday.

Preliminary results from the PSA’s Labor Force Survey (LFS) showed the unemployment rate stood at 5.3%, slightly higher than the 5.2% jobless rate in July but lower than 8.1% a year earlier. 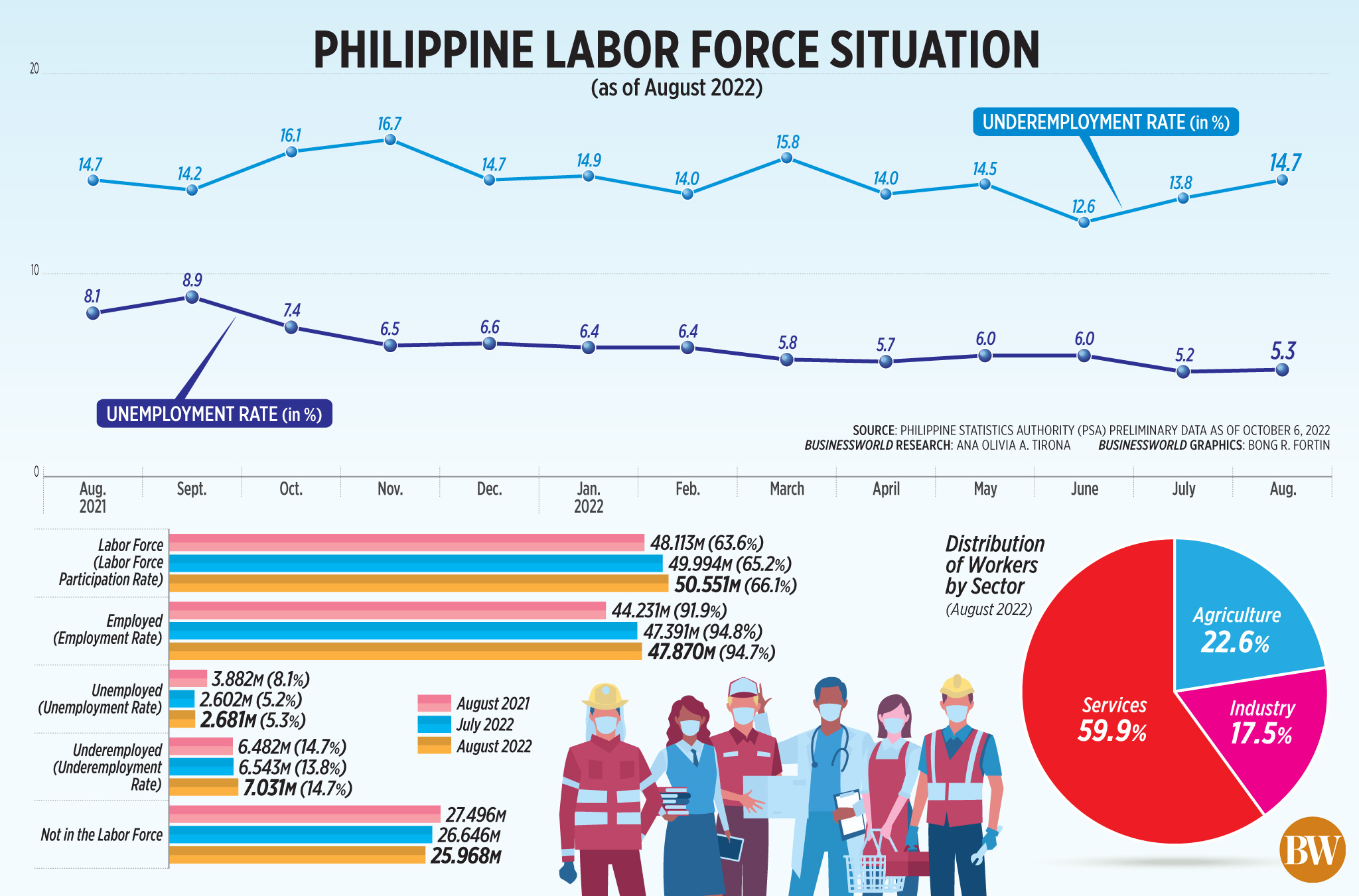 August saw the highest unemployment rate in two months or since 6% in June.

Socioeconomic Planning Secretary Arsenio M. Balisacan attributed the year-on-year decline in unemployed Filipinos to the gradual reopening of the economy.

“We are now reaping the gains of the safe and gradual full reopening of the economy. However, we must not rest on our laurels — we must harness the benefits of our key economic liberalization laws… These reforms would attract high-value and innovation-driven investments which, in turn, could generate more and quality employment,” he said in a statement.

Meanwhile, the job quality deteriorated further in August as the underemployment rate — the share of those already working, but still looking for more work or longer working hours to the total employed population — increased to 14.7% from 13.8% in July.

This was the highest underemployment rate in five months, or since 15.8% in March.

For the first eight months of 2022, the unemployment rate averaged 5.8%, lower than 7.8% in the same period last year.

The underemployment rate averaged 14.3% in January to August, down from 15.9% a year ago.

Meanwhile, the employment rate stood at 94.7% in August, slipping from 94.8% in July. This represents 47.87 million employed Filipinos, slightly higher than 47.391 million in July.

On average, an employed Filipino worked 40.5 hours a week in August, unchanged from July but higher than 39.6 hours in August last year.

The service sector remained the leading employer during the month, accounting for 59.9% of the total. This was followed by agriculture and industry with a 22.6% and 17.5% share, respectively.

Trade Union Congress of the Philippines Vice-President Luis C. Corral said he expected the increase in the number of jobless Filipinos as “more people are desperately looking for jobs.”

“I expect these, and these are not good numbers and these come a day after the 6.9% inflation rate, so we witness the reality that the global economy is now going into a recession absolutely,” he said by telephone.

Headline inflation surged to 6.9% year on year in September due to rising food, utility and transport prices.

Mr. Corral added that the increase in labor force participation was significant since it showed that more Filipinos were looking for work.

“The improvement in the labor force participation was likely driven by the further reopening of the economy, some fresh graduates still, and parents and guardians who were able to take on jobs with children going to school instead of studying from home,” China Banking Corp. Chief Economist Domini S. Velasquez said via e-mail.

UnionBank of the Philippines, Inc. Chief Economist Ruben Carlo O. Asuncion said the unemployment rate is likely to slow this year but higher inflation may weigh on job creation.

“We maintain our view of labor market indicators lagging amidst upside risks with the economy’s reopening impact dissipating, a higher inflation impact on businesses and consumers, and a higher interest rate environment into 2023,” Mr. Asuncion added. — Mariedel Irish U. Catilogo

MSME sanitary inspection to be delegated to local governments

Getting to the bottom of things