METRO MANILA’S retail price of goods in April grew at its fastest pace in three and a half years, preliminary data from the Philippine Statistics Authority (PSA) showed.

The PSA on Thursday reported that the general retail price index (GRPI) rose by 3.5% in April, faster than the 2.7% posted in March and the year-earlier rate of 2.2%. It was the fourth straight month of retail price growth in Metro Manila.

“The April print shows inflation creeping into consumption, with the uptick in the retail prices of goods and services getting more pronounced as inflation began to bite,” Security Bank Corp. Chief Economist Robert Dan J. Roces said in a Viber message. 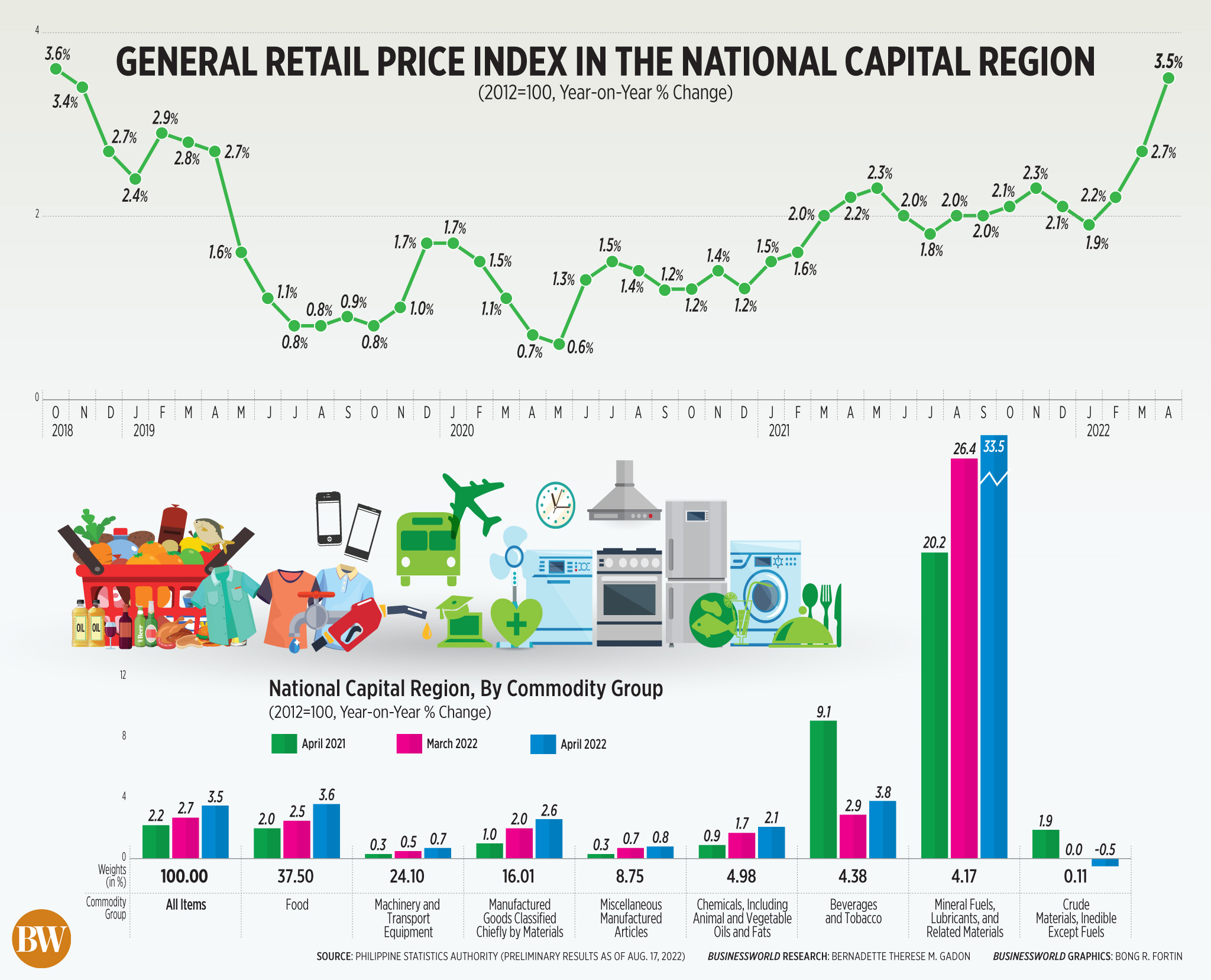 The April GRPI was the fastest growth in three and a half years or since the 3.6% expansion seen in October 2018.

For the January to April period, retail prices grew by an average of 2.5% versus 1.8% in the same period last year.

Bank of the Philippine Islands Lead Economist Emilio S. Neri, Jr. said in a Viber message that the economic reopening “combined with a surge in transport cost resulting from the armed conflict in Eastern Europe” drove the GRPI print higher in April.

Metro Manila has been under the most lenient pandemic Alert Level 1 since March 1, allowing many businesses to resume full operations.

However, Russia’s invasion of Ukraine in late February drove oil prices to over $100 per barrel amid concerns over supply.

PSA data showed higher prices of food and fuel contributed to the faster GRPI in April.

Likewise, higher annual increments were seen in beverages and tobacco (3.8% in April from 2.9% in March); manufactured goods classified chiefly by materials (2.6% from 2%); chemicals, including animal and vegetable oils and fats (2.1% from 1.7); machinery and transport equipment (0.7% from 0.5%); and miscellaneous manufactured articles (0.8% from 0.7%).

On the other hand, prices of crude materials, inedible except fuels contracted by 0.5% in April after prices were unchanged in March.

Preliminary data showed the economy expanded by 7.4% in the second quarter, slower than the 8.2% in the previous quarter and the 12.1% expansion in the same quarter in 2021.

Household final consumption expenditure, which accounted for three-fourths of the GDP, grew by 8.6% annually in the second quarter, slower than 10.1% in the first quarter but faster than 7.3% last year.

Both economists expect the uptick in headline inflation to further drive GRPI growth in the coming months.

Sangley airport construction may start by Q3 next year

TRAIN collections ahead of target at P33.7 billion