THE Philippines’ merchandise trade deficit hit another record in June as imports continued to outpace exports despite a year-on-year slowdown.

The yearly increase in imports eased to its lowest since the 23.4% jump in March. 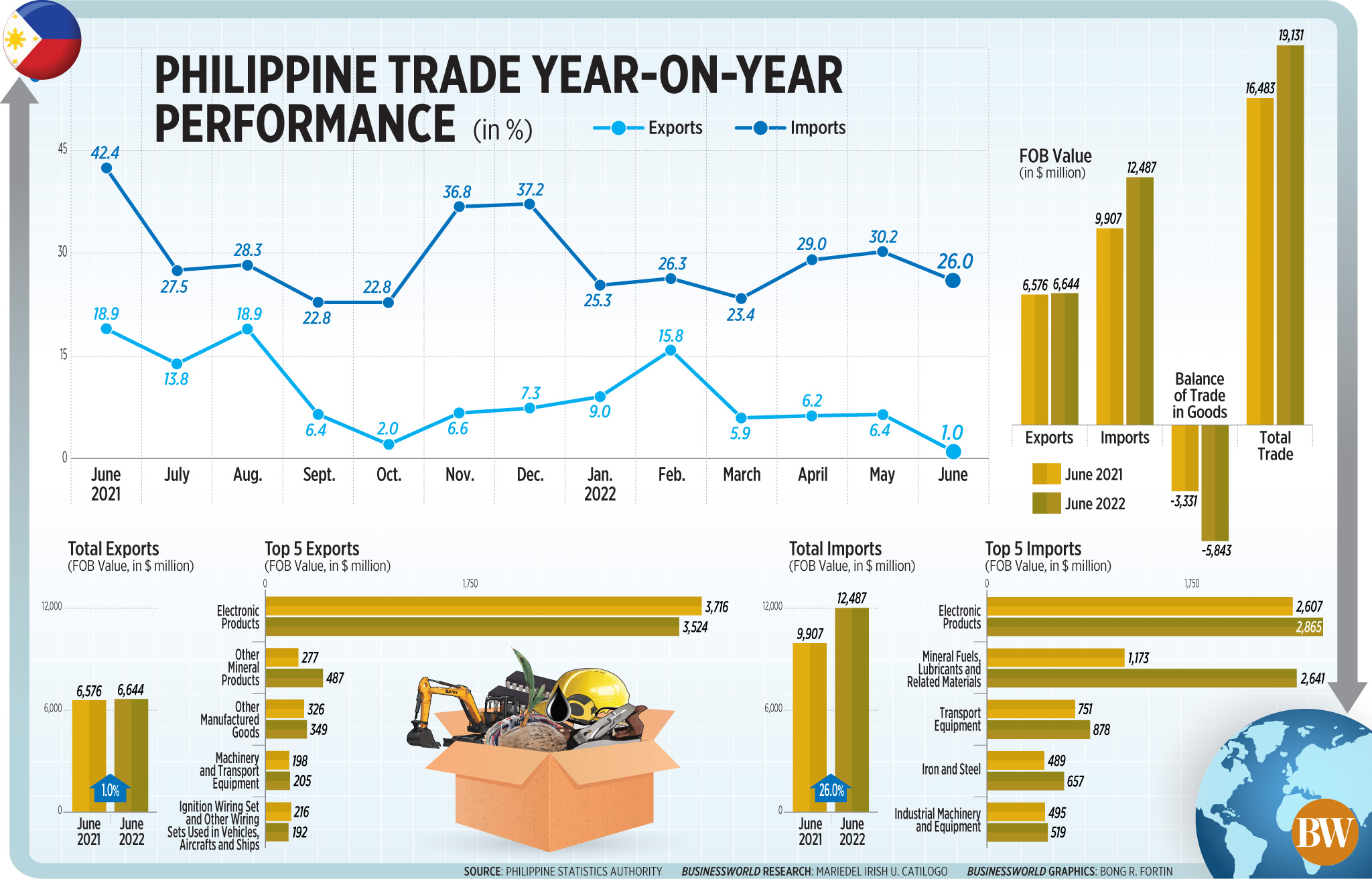 This was the slowest annual growth since the 1.4% contraction in February 2021.

This brought the balance of trade in goods — the difference between exports and imports — to a record deficit of $5.843 billion in June.

It was wider than the $3.331-billion gap in the same month last year and the revised $5.556-billion deficit in May.

Exports likewise went up by 7.1% to $38.527 billion, in line with the 7% full-year growth target set by the Development Budget Coordination Committee.

“We are ramping up and continuing the rapid growth in our construction spending for capital formation,” Mr. Balisacan said at a press conference on Tuesday.

UnionBank of the Philippines, Inc. Chief Economist Ruben Carlo O. Asuncion said the trade activity has slowed as it returns to its pre-pandemic level.

“The continued widening of the trade deficit is still mainly due to the bloated imports made up largely of higher oil costs and higher priced imported inputs,” he said in an e-mail.

“Nevertheless, with global oil prices on the decline due mainly to higher supplies, we will see the trade deficit ease in the coming months and therefore easing off pressure on the local currency.”

Semiconductors, which accounted for more than three-fourths of electronic products and 40.4% of total exports, dipped by 2.5% to $2.685 billion.

“There will be no trade deficit for the electronics industry,” Semiconductor and Electronics Industries in the Philippines Foundation, Inc. President Danilo C. Lachica said in a separate e-mail.

By major type of goods, manufactured goods had the biggest share of the total exports in June by 78.6%, amounting to $5.224 billion.

Meanwhile, imports of raw materials and intermediate goods grew by 14% on an annual basis to $4.631 billion.

Mineral fuels, lubricant, and related materials more than doubled to $2.641 billion from $1.173 billion a year ago.

The United States was the top export destination in June with export receipts amounting to $1.047 billion, accounting for 15.8% of the total.

“We still expect double-digit import growth in [the second half of 2022], while exports could weaken further as global growth cools down amid high inflation and rising rates environment,” Mr. Roces said.

The PSA noted that import figures for June to December 2021 (except for November) and January to May 2022 were revised due to exclusion of duplicate transactions identified by the Bureau of Customs.

It said that these transactions came from the withdrawal of manufactured goods from the freeport zone area.