THE PHILIPPINES slipped two spots in the latest gender gap rankings released by the World Economic Forum (WEF), as the number of women participating in the labor force remained low amid the coronavirus pandemic.

The scores are based on a 0 to 1 scale, where 1 represents optimal gender parity. 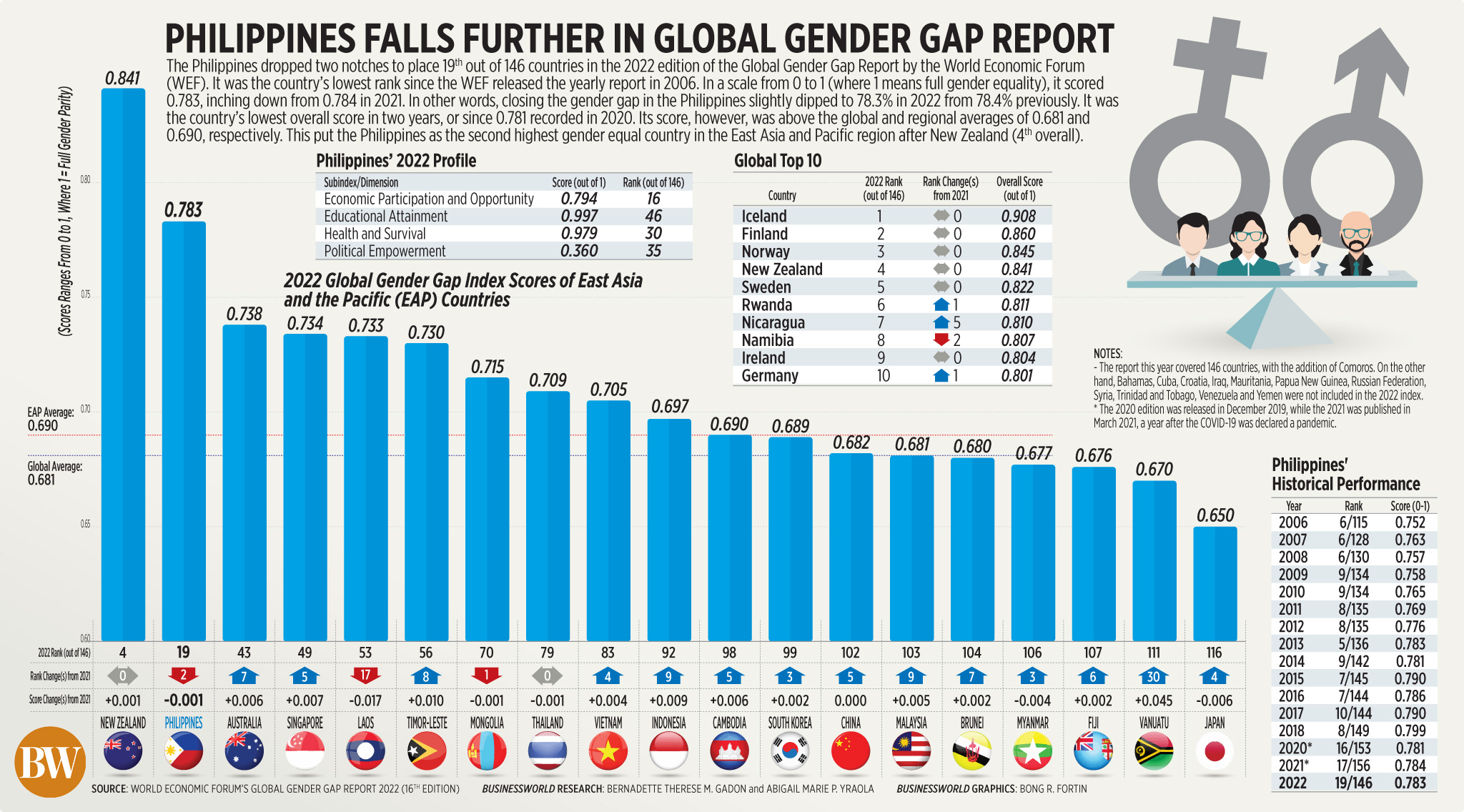 “While the country has improved upon its first gender parity score by 4.2 percentage points, since 2013 progress has hovered between 0.783 and 0.799. In 2022 the Philippines records a gender gap of 21.7%, similar to last year,” the WEF report said.

Despite this, the Philippines had the second-highest ranking in East Asia and the Pacific, after New Zealand which placed 4th globally.

“East Asia and the Pacific has closed 69% of its overall gender gap, marginally increasing the regional performance from the 2021 edition, with 13 of 19 countries improving their gender gap score. At this pace, the region will need 168 years to close the gender gap,” the WEF said.

Iceland topped the Gender Gap Index for a 13th straight year, followed by Finland and Norway. While 68.1% of the global gender gap was closed in 2022, WEF said progress has stalled in most countries.

The WEF report showed the Philippines, whose population consists of about 54 million women, got a score of 0.794 in terms of the economic participation and opportunity sub-index, putting it at 16th place overall.

“While the entire labor force was impacted, in 2022 the share of women participating in the workforce was still 24.5 percentage points lower than the share of men. Gender parity for legislative, senior officers and managers, as well as for professional and technical workers, remains constant,” the WEF said.

The Philippines scored 0.997 in the educational attainment sub-index, equivalent to 46th place.

“However, on educational attainment, gender parity decreased at the level of enrolment in primary education, with a notably larger share of boys than girls in growing enrolment numbers overall,” the WEF said.

Makati Business Club (MBC) Programs and Projects Director Roxanne V. Lu told BusinessWorld in a mobile phone message the government could work with the academe and private sector to encourage more female students to pursue higher education in science, technology, engineering, and mathematics, as well as participate in upskilling and reskilling programs.

MBC is one of the WEF-Center for the New Economy and Society’s partner institutes as provided in the 2022 Global Gender Gap report.

“Micro, small, and medium enterprise support and the promotion of job-creating investments can open opportunities for work, and of course we need to promote Republic Act No. 11313 or the Safe Spaces Act now that more employees are back to working on-site,” Ms. Lu said.

“MBC will continue to work with government agencies to promote fair and equal wages and to provide growth opportunities so more women can take on leadership roles in both public and private organizations,” she added.

LEADERSHIP
Meanwhile, the Philippines was in 4th place out of 36 economies in terms of women representation in leadership positions, according to professional networking platform LinkedIn.

Based on LinkedIn’s data in the WEF Gender Gap report, the Philippines has posted the largest increase in hiring women in leadership roles among markets in the Asia-Pacific (APAC) region since 2015.

“Only about 1 in 3 (34%) hires into leadership positions in the Philippines in 2015 were women, with that figure jumping to 43% in 2022,” LinkedIn said in a separate statement on Wednesday.

“Among the countries studied in the APAC region, the Philippines has the highest representation of women in leadership at 41%, followed by Singapore (39%), New Zealand (33%), Australia (32%) and India (18%),” it added.

However, LinkedIn said that figures for the Philippines showed that men are 26% more likely to be promoted into leadership positions compared to women.

LinkedIn Managing Director-APAC Feon Ang said that there should be more efforts to ensure that women in the workforce have equal access to opportunities.

“Organizations and business leaders should look at solutions like internal mobility, fair hiring practices with a focus on skills and flexibility. This will ensure that women are equal contributors at all levels in an organization,” she said.

Michael L. Ricafort, chief economist at Rizal Commercial Banking Corp., said in a Viber message that it is important for the country to continue narrowing the gender gap to ensure inclusive growth.

“The lockdowns, considered as among the longest in the world could have aggravated both the wealth gap and gender gap in terms of missed productivity for the economy, in view of the disruptions in the educational system, face-to-face/in-person yet to be fully restored, leading to some opportunity losses especially for the younger generations,” he added.