THE UNEMPLOYMENT RATE in the Philippines jumped to a three-month high in May while job quality deteriorated despite increased economic activity, data from the Philippine Statistics Authority (PSA) showed.

Preliminary data from the statistics agency showed the jobless rate in May reached 6%, higher than 5.7% in April. However, this was still lower than 7.7% in May last year.

It was the highest unemployment rate recorded since 6.4% in February this year. 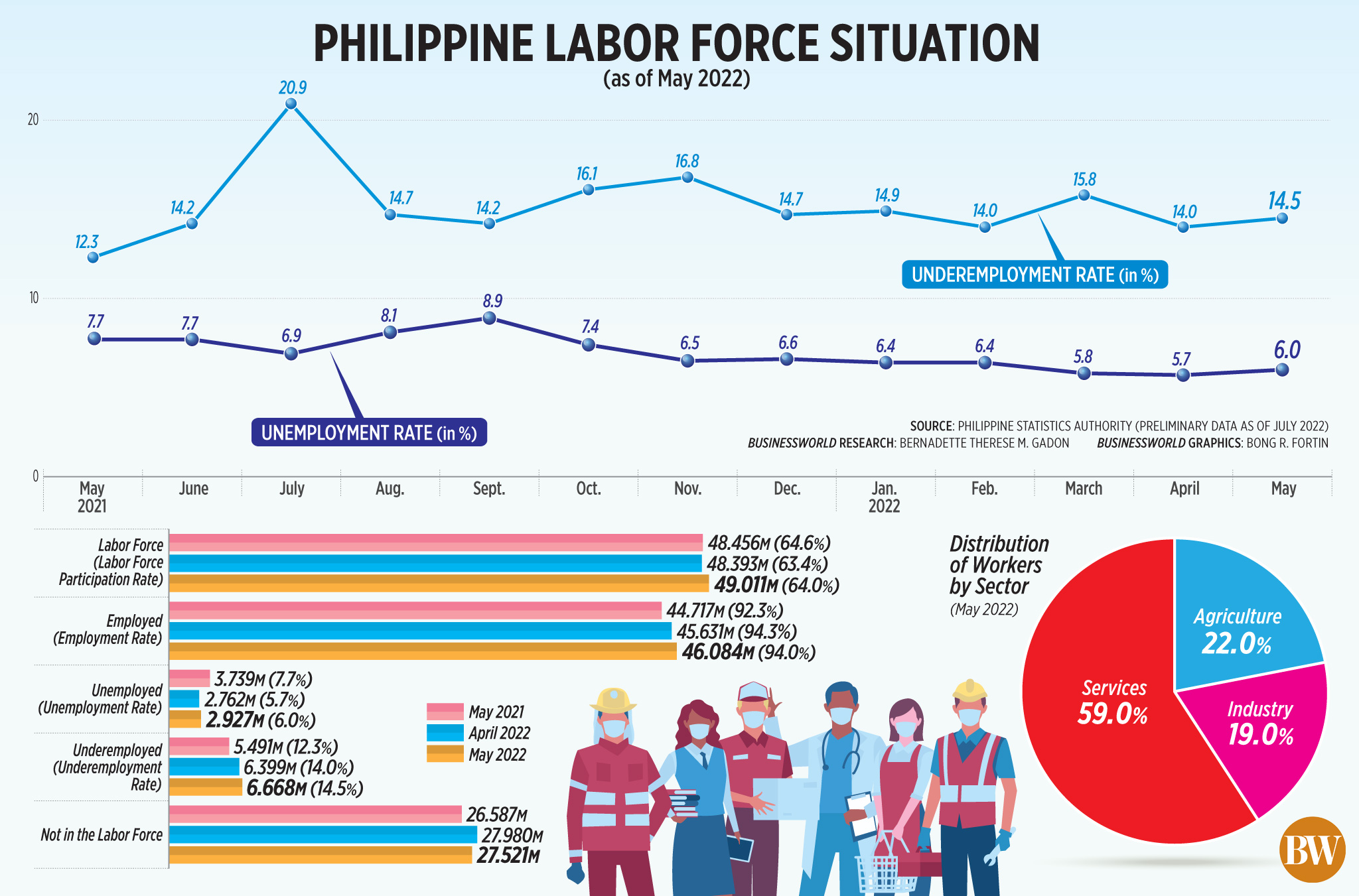 Job quality deteriorated as the underemployment rate — the proportion of those already working but still looking for more work or longer working hours to the total employed population — jumped to 14.5% in May from 14% in April. It was the highest underemployment rate in two months or since 15.8% in March.

In absolute terms, this translated to 6.668 million underemployed Filipinos in May, 269,000 more than the 6.399 million without work in April.

“Amidst external shocks, the government has sustained the economy’s growth momentum and steered it towards a higher growth path. Now, the immediate challenge is the full reopening of the economy,” Socioeconomic Planning Secretary Arsenio M. Balisacan said in a statement.

Trade Union Congress of the Philippines (TUCP) spokesperson Alan A. Tanjusay said the end of the election campaign period may have contributed to the increase in unemployed people.

“These are workers employed by candidates as staff in their campaign activities and gimmicks including those in the supply chain,” Mr. Tanjusay said in an e-mail interview.

“We can tag specific occupations and industries that are possibly election-related. In May 2022 versus May 2021, we can see that there was an increase in employment. In particular, the development of web portals and those in other service activities — we have a specific occupation code which is for activities of political organizations,” Mr. Mapa said in Filipino, during a press briefing on Thursday.

He noted some activities such as catering and restaurant operations may be indirectly related to the election campaign period.

The national elections were held on May 9.

PSA data showed the size of the labor force in May was approximately 49.011 million, up by 618,000 from 48.393 million in April. This brought the labor force participation rate (LFPR) to 64% of the country’s working-age population in May improving from 63.4% the previous month.

Security Bank Corp. Chief Economist Robert Dan J. Roces said in an e-mail more people are entering the labor market as Metro Manila and most provinces are under the most lenient alert level.

“The industries which reported high month-on-month growth rates are correlated with looser mobility curbs, as such the gradual pace may continue in the months ahead to put the unemployment rate at or near the pre-pandemic unemployment rate average,” he said.

New entrants to the labor force reached 1.216 million in May, higher than 1.148 million in April.

The employment rate was recorded at 94% in May from 94.3% in April. This was equivalent to 46.084 million employed people in May from 45.631 million previously.

The National Economic and Development Authority (NEDA) said in a statement that significant employment gains were noted in the services sector as tourism and business activity picked up amid looser mobility curbs.

The services sector remained the top employer in May after recording an employment rate of 59%, a bit higher than 58% in April. Industry also improved and edged up to 19% from 18.4%.

However, the employment rate in agriculture eased to 22% in May from 23.6% in April.

“We employ around a quarter of our labor force in agriculture, but the sector produces just a tenth of the economic output. Taken together, these mean that jobs in that sector are both very weak and very low-paying. Prevailing agricultural productivity programs such as mechanization will increase yields and perhaps even gross domestic product (GDP) contribution, but they will also mean fewer needed farmhands,” Mr. Salceda said in a statement.

On average, an employed Filipino worked 39.8 hours a week in May, decreasing from the 40.1 hours logged the previous month, but higher than the 39 hours in May last year.

“Over the medium term, the government will focus on creating more jobs, quality jobs, and green jobs through productivity-enhancing investments,” Mr. Balisacan said.

According to Mr. Balisacan, strategies to push up employment are to improve quality of education, provision of opportunities for life-long learning, in-demand skills development, options to obtain micro-credentials, enhanced job facilitation programs and strengthened linkages between industry, business and training institutions for a more efficient labor market.

INFLATION
However, analysts are wary of inflationary pressures on businesses.

“Downside risks of course remain to be inflation’s effect to businesses, where the cost of inputs may affect the hiring pace,” Mr. Roces said.

Inflation rose by 6.1% in June, the highest rate in nearly four years, mainly due to high food and transport costs. Year-to-date inflation averaged 4.4%, still above the central bank’s 2%-4% target but remained below the revised 5% forecast this year.

Mr. Tanjusay, the spokesperson of the country’s largest labor federation, said unemployment is likely to increase further in June.

“There will also be an increase in productivity and a little migration of workers to nearby regions where minimum wages are higher and or away from regions where rising cost of living is felt,” he said.

The minimum wage in Metro Manila increased by P33 on June 4, bringing the daily minimum wage rate to P570 for workers in nonagricultural sectors, and P533 for those within the agricultural industry.

Medalla voices caution over plans to create $4.9B sovereign fund

AVID continues recovery, posts slight gain in first half of 2019