By Keisha B. Ta-asan

CASH REMITTANCES sent home by overseas Filipino workers (OFWs) jumped by 3.9% in April as many countries further reopened their economies and eased travel restrictions amid the ongoing pandemic.

Data from the Bangko Sentral ng Pilipinas (BSP) showed cash remittances through banks stood at $2.395 billion in April, higher than the $2.305 billion in the same month in 2021.

The growth in remittances was the fastest since 5.1% in November last year. 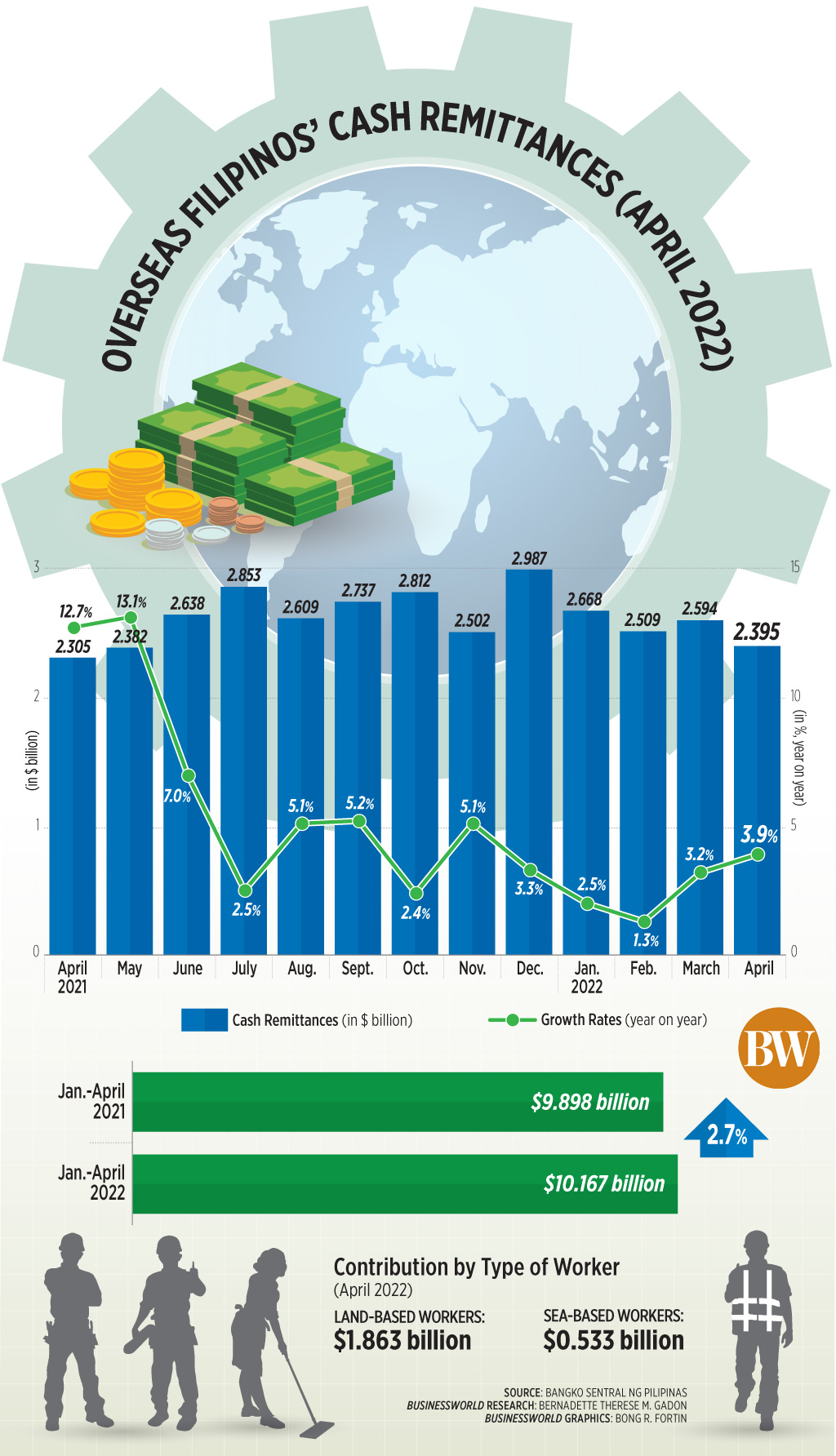 However, the amount of cash sent home by migrant Filipinos was the lowest in 11 months or since the $2.382 billion in May 2021.

“The expansion in cash remittances was due to the growth in receipts from land-based and sea-based workers,” the BSP said.

More Filipino workers have been deployed overseas as many countries relaxed travel restrictions and increased economic activity amid the pandemic.

Filipino migrants may have been encouraged to send home more money as the peso further weakened against the US dollar.

The peso fell to an over three-year low on Monday after it closed at P53.30 against the dollar.

For the first four months of the year, cash remittances increased by 2.7% year on year to $10.167 billion.

The expansion in cash remittances during the January to April period was driven mainly by inflows from the United States, Saudi Arabia, Japan, Taiwan, and Singapore.

Nearly half or 41% of the overall remittances came from workers in the United States, followed by Singapore, Saudi Arabia, Japan, the United Kingdom, the United Arab Emirates, Canada, Qatar, South Korea, and Taiwan.

Remittances from the top 10 countries accounted for 79% of the total during the four-month period.

Meanwhile, personal remittances, which include inflows in kind, went up by 3.8% year on year to $2.671 billion in April.

This brought personal remittances 2.6% higher to $11.317 billion in the first four months of the year.

“We continue to expect remittance inflows growth in the coming months even amidst the backdrop of protracted geopolitical risks and threat of a global economic slowdown,” Mr. Asuncion said.

The BSP expects remittances to grow by 4% this year.