THE PHILIPPINE ECONOMY likely expanded in the first quarter thanks to favorable base effects and election spending, but the surge in global oil and commodity prices may have dampened growth momentum.

If realized, this would be a turnaround from the 3.8% decline logged in the January to March period last year. However, this would be slower than the revised 7.8% growth in the fourth quarter. 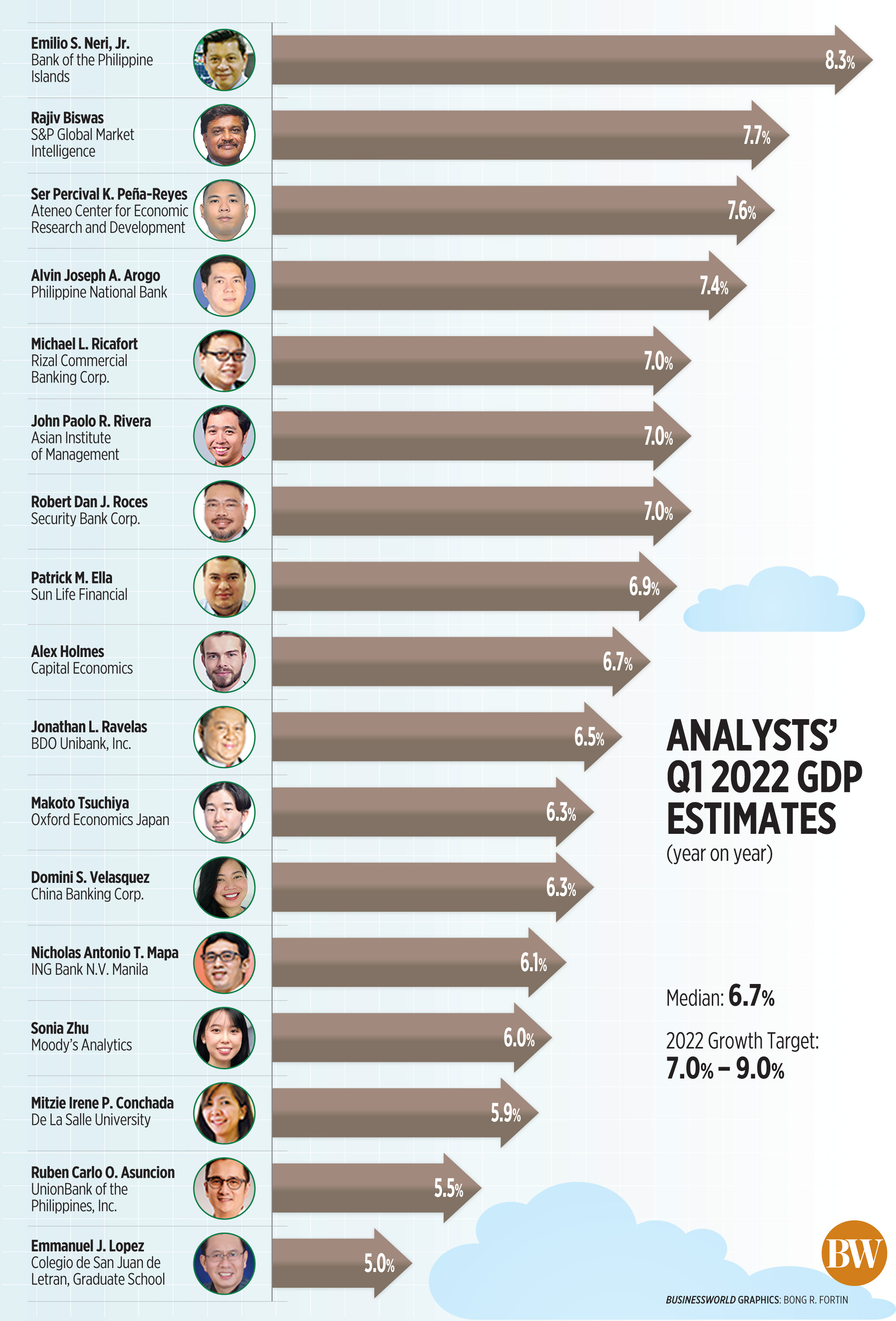 This is also below the government’s 7-9% target range this year.

The Philippine Statistics Authority is scheduled to report the first-quarter GDP print on May 12.

Economists said the rebound in the first quarter was mainly due to base effects, and would have been stronger if there was no strict lockdown to curb the Omicron-driven surge in January.

“[First-quarter GDP] could have been bigger had there been no lockdown in the early part of January 2022 brought about by a slight surge of the pandemic that forced the slowdown in economic operation,” Emmanuel J. Lopez, economist at the Colegio de San Juan Letran Graduate School, said in an e-mail.

He noted the economy was able to recover as the coronavirus disease 2019 (COVID-19) infections plunged and the government further loosened restrictions. Metro Manila and other parts of the country have been under the most lenient Alert Level 1 since March.

Election-related spending may have also given the economy a boost in the first quarter. The official campaign period for national positions kicked off on Feb. 8, while that for local offices started on March 25. Elections will be held today (May 9).

“Retail trade and household consumption increased alongside election-related spending. Though prices of basic commodities especially petroleum products increased due to the Ukraine-Russia war, consumer and private sector spending remained high due to the reclassification of the restrictions to level 1,” De La Salle University Economist Mitzie Irene P. Conchada said in an e-mail interview.

The Russia-Ukraine war sent oil and commodity prices soaring to multi-year highs since late February, amid supply concerns. Russia is the world’s second-largest producer of crude oil, while Ukraine is one of the top exporters of maize (corn) and wheat.

Rizal Commercial Banking Corp.’s (RCBC) Michael L. Ricafort said in an e-mail that the further reopening of the economy and achieving the lowest quarantine level by March was a step towards “greater normalcy.”

“We think that the economy shrugged off the potential negative impact of the Omicron-related surge in early January as evidenced by the continuing expansion of PH’s PMI (Purchasing Managers’ Index),” said Ruben Carlo O. Asuncion, chief economist from UnionBank of the Philippines, in an e-mail. “Domestic demand has continued to improve, and we think this is so because again of the economy’s reopening.”

The Philippine manufacturing PMI continued to expand this year, hitting a three-year high in March.

Economists are still keeping a close eye on the Russia-Ukraine war and the pandemic in the next few months.

“We think the Philippine economy will continue to normalize for the rest of the year, as activity normalizes amid low (COVID-19) cases and higher vaccination rates. That said, the headwinds facing the domestic economy have risen,” Makoto Tsuchiya, assistant economist from Oxford Economics Japan, said.

“With so much uncertainty all over, it is very difficult to determine if the government will hit its 2022 growth target,” UnionBank’s Mr. Asuncion said.

High inflation due to soaring pump prices may hurt consumer spending, which accounts for around three-fourths of the economy, for the rest of the year.

Bank of the Philippine Islands Lead Economist Emilio S. Neri, Jr. said as long as oil prices remain near current levels, “a return to 2019 output can still be attained by the end of this year.”

“Since the Philippines is still in the midst of exiting from one of the strictest pandemic restrictions in the world, the country’s GDP growth in 2022 will largely be driven by the faster recovery of the businesses hardest hit by the lockdowns,” Philippine National Bank Economist Alvin Joseph A. Arogo said.

“As such, the drag of higher inflation on consumer spending due to the Russia-Ukraine war can largely be outweighed by the economic reopening,” he added.

China Banking Corp. Chief Economist Domini S. Velasquez said consumer spending will be “less robust” for the rest of the year due to elevated inflation and supply chain bottlenecks in China.

“External demand will soften as the outlook for global growth dims,” she said.

However, the country’s export sector faces headwinds from weaker Europe and China growth, he said. China is one of the country’s top export markets, while the European Union accounts for about 10%.

“This creates a double blow to the Philippines export sector outlook in the near-term,” Mr. Biswas said.

Security Bank Corp.’s Chief Economist Robert Dan J. Roces said the outcome of the upcoming national elections and its new economic team “will be the key in assessing direction of sentiment which in turn affects growth.”

Factory output expands for fifth month in a row