THE International Monetary Fund (IMF) expects a faster expansion for the Philippine economy this year, but still below the government’s growth target as the ongoing war in Ukraine clouds the global economic outlook.

In its latest World Economic Outlook (WEO) released on Tuesday, the IMF raised its 2022 growth projection for the Philippines to 6.5% from 6.3% previously. This is lower than the government’s 7-9% target for this year.

“The recovery is expected to further strengthen in 2022 due to a weaker-than-expected impact of the Omicron wave, which allowed most areas including Metro Manila to be moved to the least restrictive alert level,” Cheng Hoon Lim, IMF mission chief for Philippines, said in an email.

However, Ms. Lim said growth outlook remains clouded by uncertainties caused by the war in Ukraine which could hamper global supply and can lead to tighter global financial conditions.

“Greater than anticipated increases in US interest rates and slower global growth could further weigh on the recovery,” Ms. Lim said.

“There are also risk factors on the domestic front, including delays in the vaccination program and challenges from climate change and natural disasters,” she added.

The Health department said that 66.85 million people in the Philippines had been fully vaccinated against the coronavirus as of April 17, while only 12.64 million people have received booster shots.

The IMF’s growth projection for the Philippines is the fastest among five Association of Southeast Asian Nations (ASEAN) member countries, followed by Vietnam (6%), Malaysia (5.6%), Indonesia (5.4%), and Thailand (3.3%). 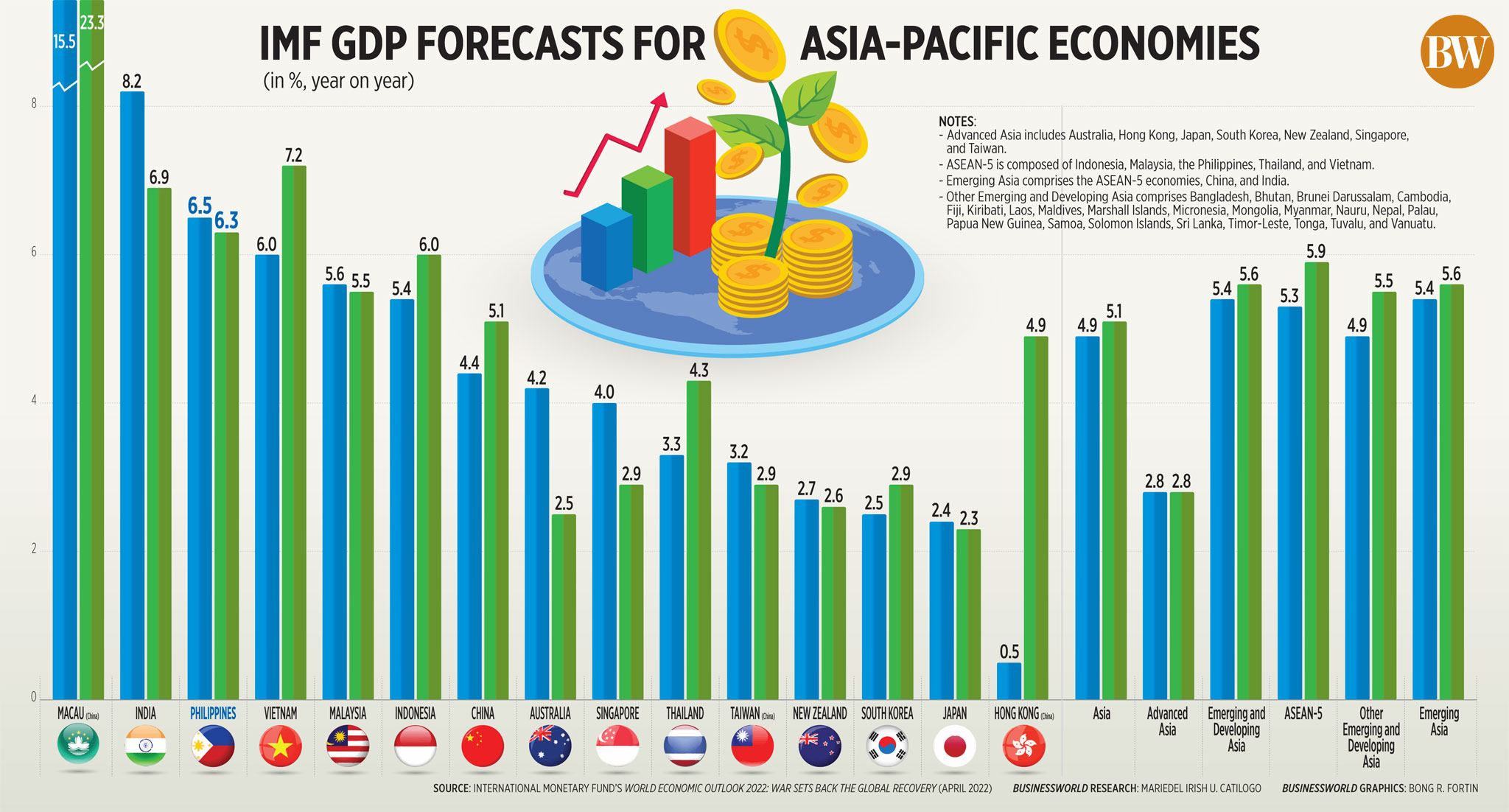 For 2023, the IMF expects the Philippine economic growth to slow to 6.3%. In January, IMF Representative to the Philippines Ragnar Gudmundsson has said they expect growth to “pick up close to 7%.”“The revision mainly reflects the base effect from higher growth rate in 2022 and the spillovers from intensified global uncertainties,” Ms. Lim said.The Philippine economy grew by 5.7% last year, a turnaround from the record 9.6% contraction in 2020.

With many economies yet to fully recover from the pandemic, the IMF said the Russia-Ukraine war will severely set back global recovery, slow growth, and drive inflation faster.

The IMF slashed its global growth forecast for 2022 and 2023 to 3.6%, 0.8 and 0.2 percentage points lower, respectively, than its January projection. If realized, this will be slower than the 6.1% estimated global expansion in 2021.

“The economic effects of the war are spreading far and wide — like seismic waves that emanate from the epicenter of an earthquake — mainly through commodity markets, trade and financial linkages,” the multilateral lender said.

Elevated inflation is now expected to persist for longer than the previous forecast due to the war and broadening price pressures, it added.

For 2022, inflation is projected at 5.7% in advanced economies and 8.7% in emerging market and developing economies, much higher than the estimates in January.

“The conflict is likely to have a protracted impact on commodity prices, affecting oil and gas prices more severely in 2022 and food prices well into 2023 (because of the lagged impact from the harvest in 2022),” it added.

The IMF expects Philippine headline inflation this year to reach 4.3%, which is already above the central bank’s 2-4% target range. By 2023, inflation is seen slowing to 3.7%.

Inflation in March quickened to 4% from 3% in February, reflecting the impact of the oil price spike due to the war.

“In other countries, the prominence of fuel- and war-affected commodities in local consumption baskets could lead to broader and more persistent price pressures,” the IMF said.

While inflation drivers like supply constraints and the war are beyond the control of central banks, the IMF said central banks need to adjust their monetary stances “even more aggressively” in case inflation expectations become de-anchored.

“As advanced economy central banks tighten policy and interest rates rise in those countries, emerging market and developing economies could face a further withdrawal of capital and currency depreciations that increase inflation pressures,” it said.

The Bangko Sentral ng Pilipinas (BSP) said it is ready to act preemptively to tame inflation risks, although it maintained it is keen on raising interest rates only by the second half of the year to support recovery.

“The BSP should stand ready to adjust the policy stance with a view to remaining ahead of the curve and maintaining stability in anticipation of Fed tightening, especially if the second-round effects of inflation risk de-anchoring inflation expectations,” Ms. Lim said.

In Asia, the IMF said developments in China will weigh on the region’s outlook. Recent COVID-19 lockdowns in key manufacturing and trading hubs in China could worsen supply disruptions.

With the ongoing war, supply shortages for some sectors may likely be prolonged until 2023, it said. — Luz Wendy T. Noble

Inflation to ease by H2 as transport prices stabilize — Citi