THE PHILIPPINE ECONOMY expanded more than expected in 2021, as looser restrictions spurred more business activity and consumer spending in the fourth quarter.

Preliminary data by the Philippine Statistics Authority (PSA) showed gross domestic product (GDP) accelerated by 7.7% in the October to December period, picking up from the revised 6.9% in the third quarter and a turnaround from the 8.3% drop in the fourth quarter of 2020.

This brought the full-year growth to 5.6%, rebounding from the record 9.6% contraction in 2020 that was caused by stringent lockdowns. 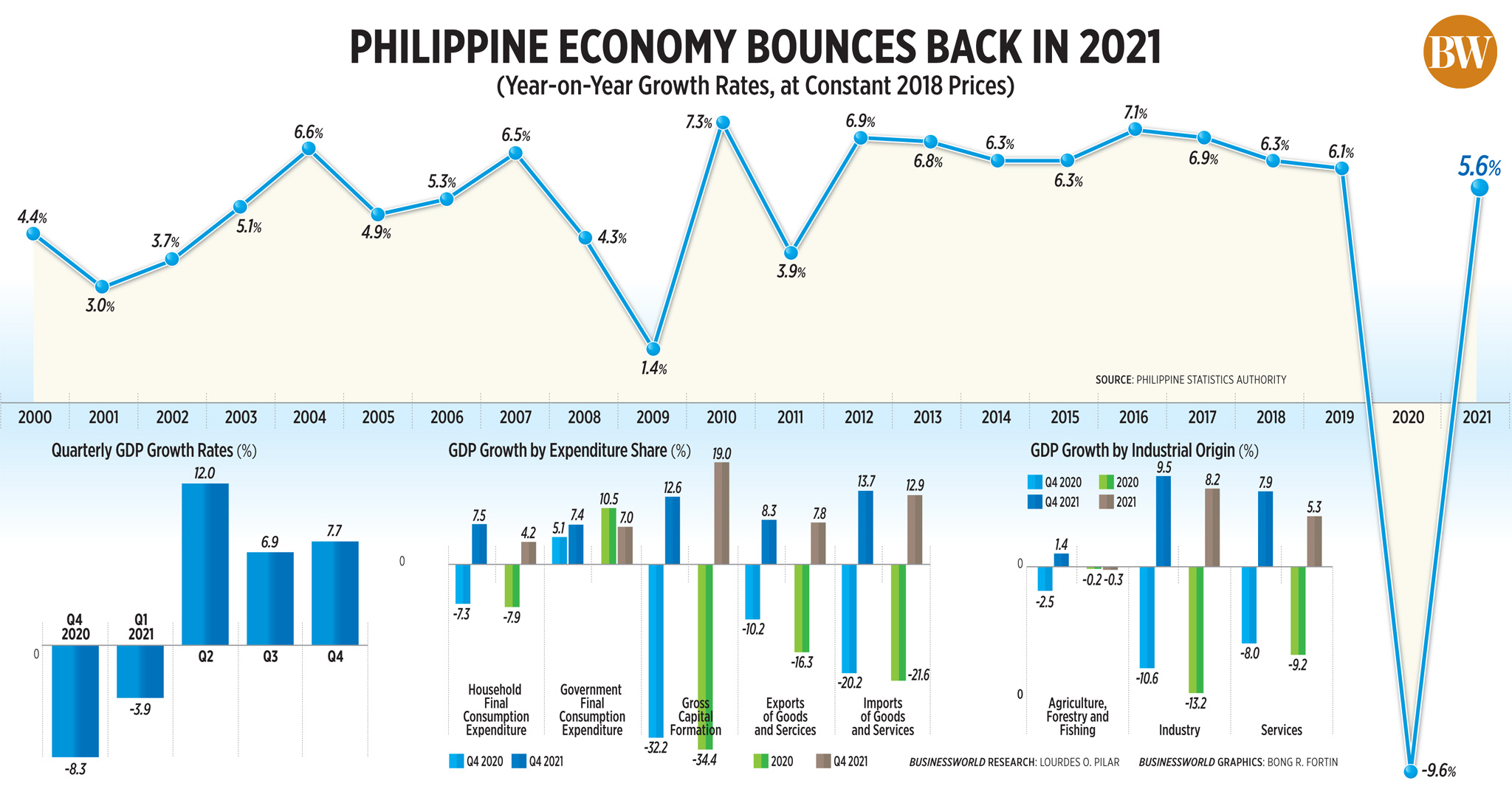 This was higher than the 5.3% median estimate of 18 economists polled by BusinessWorld, and exceeded the 5%-5.5% 2021 growth assumption of the Development Budget Coordination Committee (DBCC).

“The door to economic recovery is now fully open. The numbers for 2021 show an economy primed to break out,” Socioeconomic Planning Secretary Karl Kendrick T. Chua said during a briefing on Thursday.

“Our efforts to safely reopen the economy allowed more Filipinos to work and earn their income,” Mr. Chua said, citing the government’s shift to an alert level system with granular lockdowns in the last quarter.

The Philippine capital was placed under a more relaxed Alert Level 2 from November to December, as the number of coronavirus disease 2019 (COVID-19) infections dwindled. More businesses increased their capacity, while consumers flocked to malls and restaurants during the holiday season.

Quarter on quarter, the economy grew by a seasonally adjusted 3.1%.

“This sends a strong signal that we are on track to rapid recovery despite the impact of Typhoon Odette,” Mr. Chua said.

UnionBank of the Philippines, Inc. Chief Economist Ruben Carlo O. Asuncion said majority of the expansion was backed up by household consumption and “its improvement throughout 2021 due to rising vaccination rates and consequent reopening of the economy.”

“Government spending contributed positively to output but has now softened consistent with the government’s pronouncement of the ‘normalization’ of its spending vs. 2020 when it was full crisis-mode,” Mr. Asuncion added.

Likewise, gross capital formation expanded by 12.6% versus the 32.2% contraction recorded in 2020

“While consumption grew in [the fourth quarter], real investment (excluding inventory) seemed to have softened in [fourth quarter] which should be moving together with demand growth. […], this may be due to uncertainty that’s there because of the 2022 presidential elections,” Mr. Asuncion said.

TYPHOON IMPACT
Bank of the Philippine Islands (BPI) Lead Economist Emilio S. Neri, Jr. said he was “surprised” with how “little damping effect” that Typhoon Odette and the coronavirus disease 2019 (COVID-19) Omicron variant had on the previous quarter.

Typhoon Odette hit the southern part of the country in mid-December, resulting in P13.3 billion worth of damage to the agriculture sector.

Mr. Chua, who also sits as the National Economic and Development Authority’s director-general, said most recent data show Typhoon Odette amounted to P33.4-billion total damage and losses, which is estimated at 0.17% of the country’s GDP.

“In terms of impact to growth, our initial estimate, […] full-year GDP growth was reduced by 0.05 percentage point due to Typhoon Odette,” Mr. Chua added.

RECOVERY STILL FAR OFF
Economists warned that the growth momentum is unlikely to continue in the first quarter of 2022.

“While an Omicron wave means the economy’s continued strong performance in Q4 is unlikely to be repeated this quarter, we think growth will pick up again before long. That said, the overall recovery has a long way to go, and the economy will remain in catch-up mode throughout 2022,” Capital Economics Ltd. Asia economist Alex Holmes said in a note.

He noted the country’s recovery began from a “very low base.”

“GDP was still around 3.0% below its pre-crisis level and 14.0% behind its pre-crisis trend in Q4. That’s far weaker than anywhere else in the region,” Mr. Holmes said, adding that a “large negative output gap” will remain.

“That will keep a lid on underlying price pressures and means that the central bank is unlikely to begin tightening policy until 2023.”

For his part, BPI’s Mr. Neri said the Bangko Sentral ng Pilipinas must reconsider its monetary policy amid the higher-than-expected GDP.

“It needs to slowly adjust policy settings to avoid the problems of negative interest rates which the US is experiencing now,” Mr. Neri said in a Viber message.

Oxford Economics Philippines economist Makoto Tsuchiya said in a note that Omicron wave will have a certain pressure in the coming quarter, but “the effect will be less significant compared to Delta.”

“Beyond that, we look for more broad-based recovery this year amid a higher vaccination rate and further opening up of the economy. That said, health-related risks remain, while longer supply chain issues could be another hindrance,” Mr. Tsuchiya added.

Metro Manila and other parts of the country are currently under Alert Level 3, as COVID-19 cases remain elevated.

Economic managers are aiming to achieve 7-9% GDP growth this year.