INFLATION likely quickened beyond the central bank’s target in September, as prices of food and utilities continued to surge, according to analysts.

A BusinessWorld poll of 17 analysts yielded a median estimate of 5% for the consumer price index, near the low end of the 4.8%-5.6% estimate given by the Bangko Sentral ng Pilipinas (BSP).

If realized, headline inflation will breach the BSP’s 2-4% target range for the second straight month. 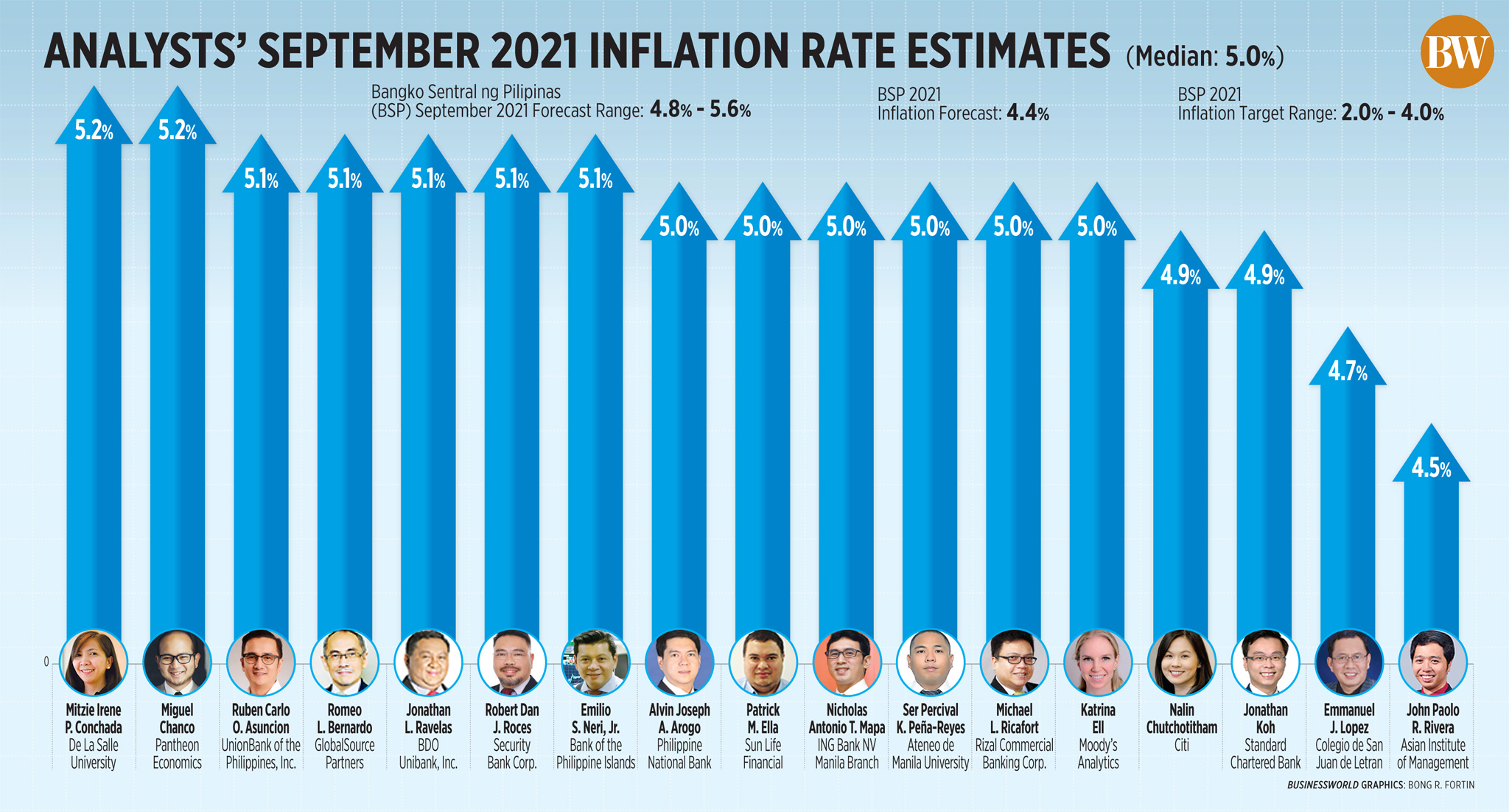 ING Bank N.V. Manila Senior Economist Nicholas Antonio T. Mapa said this can be attributed to the faster rate of increase in the prices of food staples, and the “unfavorable base effect” as inflation was relatively slow in the same month a year ago.

“The heavy-weight food sub-sector will remain the key driver for the recent inflation breach with fish, meat and vegetables all likely posting double-digit inflation. Adverse weather conditions and the ongoing African Swine Fever affected supply of the important food items for the month,” Mr. Mapa said.

Security Bank Corp. Chief Economist Robert Dan J. Roces cited the hike in electricity and pump prices as a factor that could have driven the spike in inflation last month.

He noted that Manila Electric Co. has been raising power rates for the past six months. The utility firm increased the power rates for typical households by P0.1055 to P9.1091 per kilowatt-hour in September, citing higher generation charges.

“Oil firms have been adjusting their pump prices every week to reflect the upward movements in the world oil market. These may have caused the utilities and transport baskets to accelerate by 0.8% and 0.1% month on month, respectively,” Mr. Roces added.

Data from the Energy department showed that prices of gasoline, diesel, and kerosene increased year to date by P15.10, P12.95, and P10.65 per liter, respectively, as of Sept. 28.

Another factor for the likely faster inflation in September was the continued weakness of the peso, which probably caused pricier imports, Bank of the Philippine Islands Lead Economist Emilio S. Neri, Jr. said.

“Higher inflation from a weaker peso could further boost inflationary expectations and lead to more cautious spending behavior,” he said.

Mr. Dakila has earlier said the BSP expects inflation to breach 5% in September before returning the target range by November this year.

The Monetary Board in their Sept. 23 policy review has raised the inflation forecast to 4.4% from 4.1% previously.

Despite this, the BSP has kept interest rates unchanged as it keeps an accommodative policy to support economic recovery.

“We think the central bank maintains its accommodative stance for now, looking through the supply-driven spikes as non-monetary measures are more suited to deal with these spikes,” Standard Chartered Bank economist Jonathan Koh said.

“The country’s economic recovery is uncertain. We keep our baseline view that the reverse repurchase rate will stay at 2% until a 25-basis-point rate hike at the end of the third quarter of 2022,” said Alvin Joseph A. Arogo, vice-president and head of equity research division at Philippine National Bank.

The government has downwardly revised its full-year gross domestic product (GDP) growth target to 4-5% from 6-7% previously.

BSP Governor Benjamin E. Diokno has said the economy may return to its pre-pandemic level by the fourth quarter of 2022 or the first quarter of 2023.

“Ideally, monetary policy would remain on hold and firmly accommodative until late next year to support the recovery, but the BSP may be forced to act earlier if inflation does not cool,” Ms. Ell said, noting their baseline expectation is for the first rate hike to happen by the second half of 2022.

The BSP has two more policy reviews scheduled this year set on Nov. 18 and Dec. 16.