MORE FILIPINOS went jobless in August even as people forced to work in low-paying or low-skill jobs declined, according to the local statistics agency.

The unemployment rate quickened to 8.1% — the worst in four months — from 6.9% in July, data from the Philippine Statistics Authority (PSA) released on Thursday showed. There were 3.882 million unemployed Filipinos in August, up from 3.073 million a month earlier.

The agency blamed increased joblessness to lockdowns spurred by a fresh surge in coronavirus infections that month. 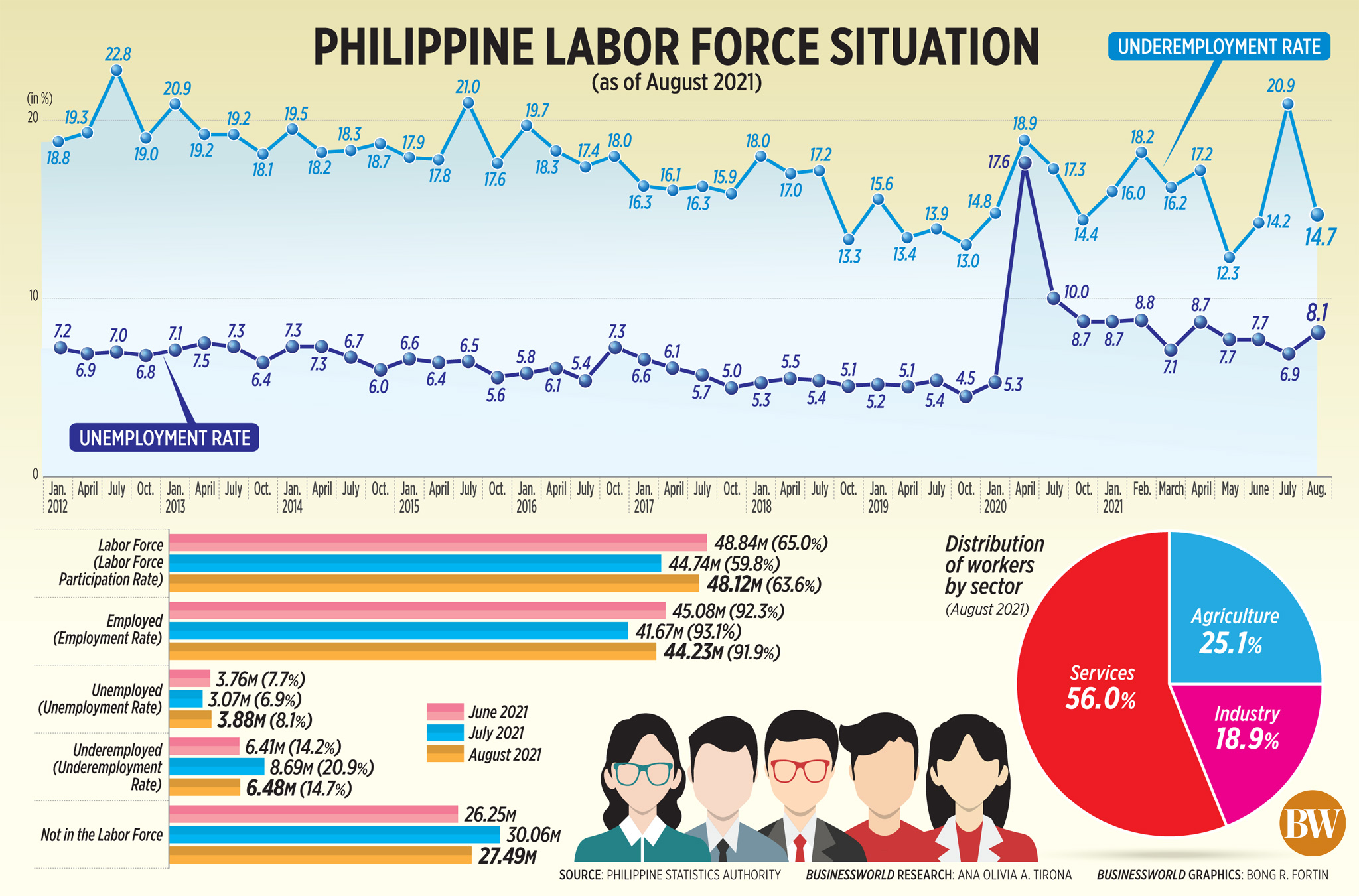 On the other hand, the quality of available jobs improved as the underemployment rate — the ratio of those already working but still looking for more work or longer job hours — slowed to 14.7% from 20.9% in July. Underemployed Filipinos fell to 6.482 million from 8.692 million a month earlier.

Workers increased to 48.116 million in August from 44.74 million in July, bringing the labor force participation rate to 63.6% of the working age population. The rate was 59.8% in July.

Job net gains of 2.6 million were surprising given the hard lockdowns in certain areas that month, said Geoffrey M. Ducanes, an economist from the Ateneo de Manila University.

“From July to August, according to the PSA data, about 3.4 million people were added to the labor force,” he said in an e-mail. “This still means that most of those who joined the labor force in August were able to find employment.”

He also noted that while underemployment declined, people who worked for fewer than 40 hours rose by 3.4 million.

“The reason why the underemployment rate went down is that fewer people expressed a desire to work more hours or to shift to a job with more hours,” Mr. Ducanes said. “This is likely because they did not think any such job was obtainable given the lockdown and poor economic conditions since the second quarter last year.”

“In other words, it is not because job quality improved,” he added.

Among subsectors, agriculture and forestry had the largest net increase in employment on a monthly basis with about 1.78 million, followed by wholesale and retail trade with 992,480 and manufacturing with 169,200.

Education had the largest drop (237,801), followed by administrative and support service activities (183,330) and professional, scientific and technical activities (110,173).

The labor market improved “as the government and the people learn to better manage the risks brought about by the COVID-19 pandemic, despite the heightened quarantine level and the spread of the Delta variant,” Socioeconomic Planning Secretary Karl Kendrick T. Chua, Finance Secretary Carlos G. Dominguez III and Budget officer-in-charge Tina Rose Marie L. Canda said in a joint statement.

‘OVERALL QUALITY’
Mr. Ducanes said the quality of jobs had actually declined despite gains in underemployment.

He noted that three-quarters of new jobs were in agriculture — the least productive sector. On the other hand, the share of managerial jobs fell to 7.5% of total employment in August from 8.4% a month earlier.

On the other hand, the share of own-account workers rose to 28.6% from 26% while unpaid family work accounted for 7.4% of the total, up from 3.9% in July. “So there were more jobs, but the overall quality of the jobs declined.”

Mr. Ducanes said the uncertainty surrounding the Delta coronavirus variant and the state of the global economy make it hard to predict where the country’s labor market is heading.

The economist added that while granular lockdowns could ease disruptions in the job market by reducing the uncertainty among business owners, this would not be enough.

The government started enforcing targeted lockdowns in Metro Manila to minimize the effects on the economy.

“It may not immediately improve to pre-pandemic points, but the granular lockdowns and higher vaccination rates will play a huge role in a better labor market outlook in September and the rest of the year,” he said in an e-mail.

“We could see unemployment dip while underemployment will likely rise with mobility curbs and the overall downbeat economic outlook capping labor hours and wages,” he said in a statement.

“As the recession drags on for yet another month, we can expect the previous guidance from the National Economic and Development Authority to hold, with unemployment to stay between 7-9% over the next two years,” he said.

“Business closures due to the protracted downturn and rising borrowing costs will likely limit the ability of the economy to provide enough job opportunities in the near term,” he added.

Government economic managers expect the economy to go back to pre-pandemic growth levels by the end of 2022 or early 2023. – Bernadette Therese M. Gadon and Beatrice M. Laforga

MSMEs may struggle to raise wages