THE WORLD BANK on Tuesday cut its economic growth outlook for the Philippines once again to 4.3% this year as it estimates 60% of the population will be vaccinated against the coronavirus disease 2019 (COVID-19) by the second quarter of 2022.

The Delta-driven surge in infections and continued lockdown restrictions have constrained economic activity, further delaying the Philippine economy’s return to pre-pandemic output to 2023 or later, the multilateral lender said in its East Asia and the Pacific (EAP) regional economic update report released on Tuesday.

The World Bank expects the Philippine gross domestic product (GDP) to grow by 4.3% this year, lower than its previous forecasts of 4.7% in June and 5.5% in April. This is also at the low end of the government’s downgraded 4-5% target for this year.

World Bank estimates also showed the Philippines and Indonesia are expected to fully inoculate 60% of their populations against COVID-19 by the second quarter of 2022.

“The Philippines had a problem of vaccine hesitancy; it had not acquired enough vaccines [and] it was a late entrant to the vaccine market. But the good news is, we project that the Philippines, by the middle of next year, will have a high level of coverage,” Aaditya Mattoo, chief economist for the East Asia and Pacific region at the World Bank said at an online press briefing on Tuesday.

“[However], we must not think of vaccines as a miracle, vaccines are one weapon in our arsenal which we will need to deal with COVID, [along with measures in] continuing precautionary behavior, stronger testing, and preparing the health system,” he added.

The World Bank also noted the sharp reduction in the Philippines’ budget for social protection this year, which is estimated to only account for less than 1% of GDP.

Economies with reduced spending for cash transfers and other financial assistance this year are also those that are expected to report the “weakest recoveries,” it said, identifying the Philippines, Myanmar and Timor-Leste.

The World Bank estimated the government’s budget shortfall to reach 7.6% of GDP by year’s end, lower than the Philippines’ official deficit ceiling of 9.3%.

The World Bank also warned that up to eight million more people may be trapped in poverty in Indonesia and the Philippines until 2023, if policies addressing inequality are not put in place.

“The adverse effects of the pandemic are likely to dampen long-term economic growth. In Indonesia, Mongolia, and the Philippines, firms lost on average at least 40% of their typical monthly sales and cut jobs… These negative effects on growth are likely to be stronger than any benefits of creative destruction induced by the crisis,” it added.

To boost growth, the multilateral bank said the country should focus on passing the pending bills that will ease restrictions on foreign investments.

The Philippines should also focus on improving the educational sector, adoption of new technologies to develop the services sector and boost participation in manufacturing global value chains.

“More could be done, however, to broaden the scope and accelerate the pace of reform… The Philippines could do more to guarantee the rights of foreign investors and to simplify the complex and long negative list of still restricted sectors,” the bank said. — B.M.Laforga 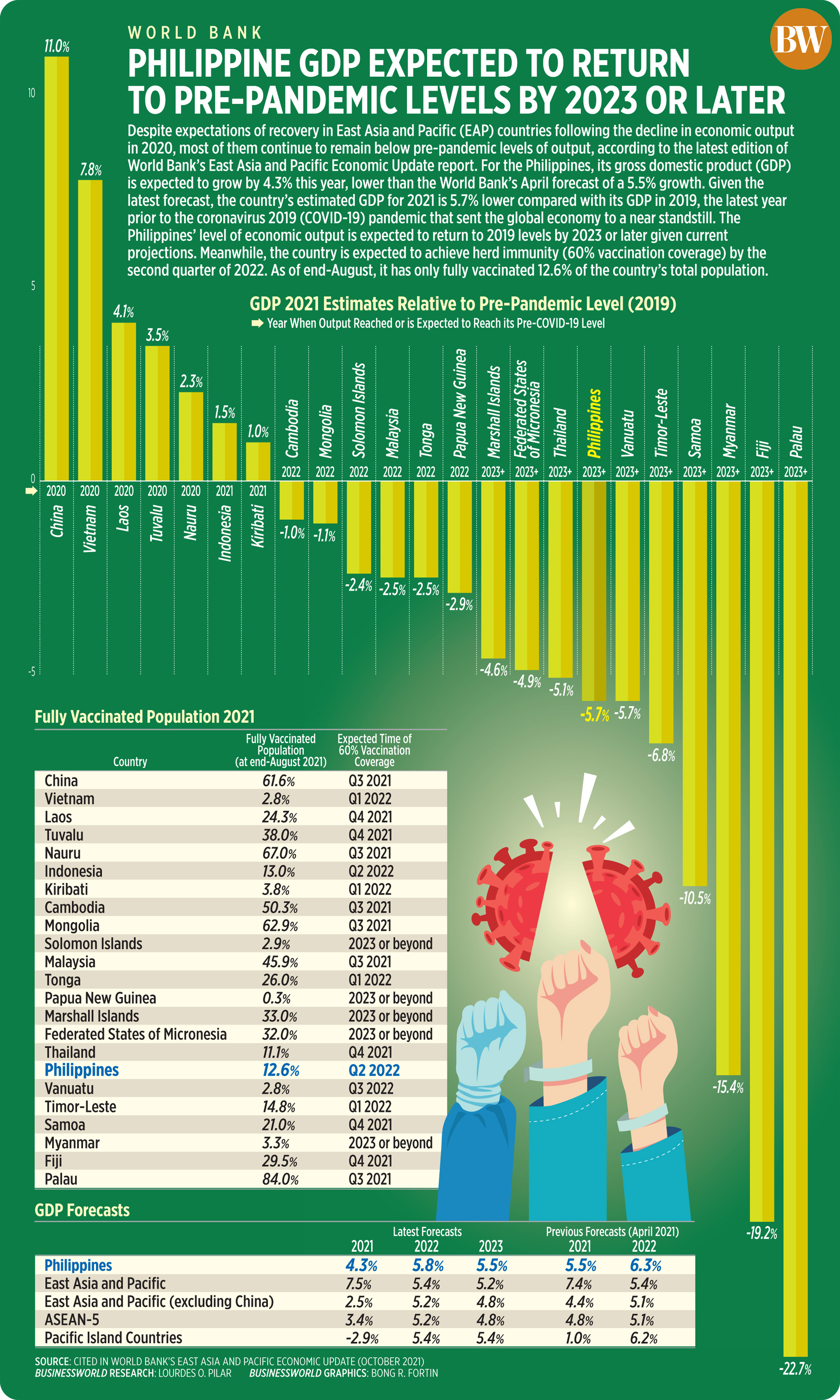