Preliminary PSA data showed the value of merchandise exports jumped by 12.7% year on year to $6.42 billion.

The July reading was a turnaround from the 8.9% drop in same month last year, albeit slower than the 18.8% growth seen in June 2021. 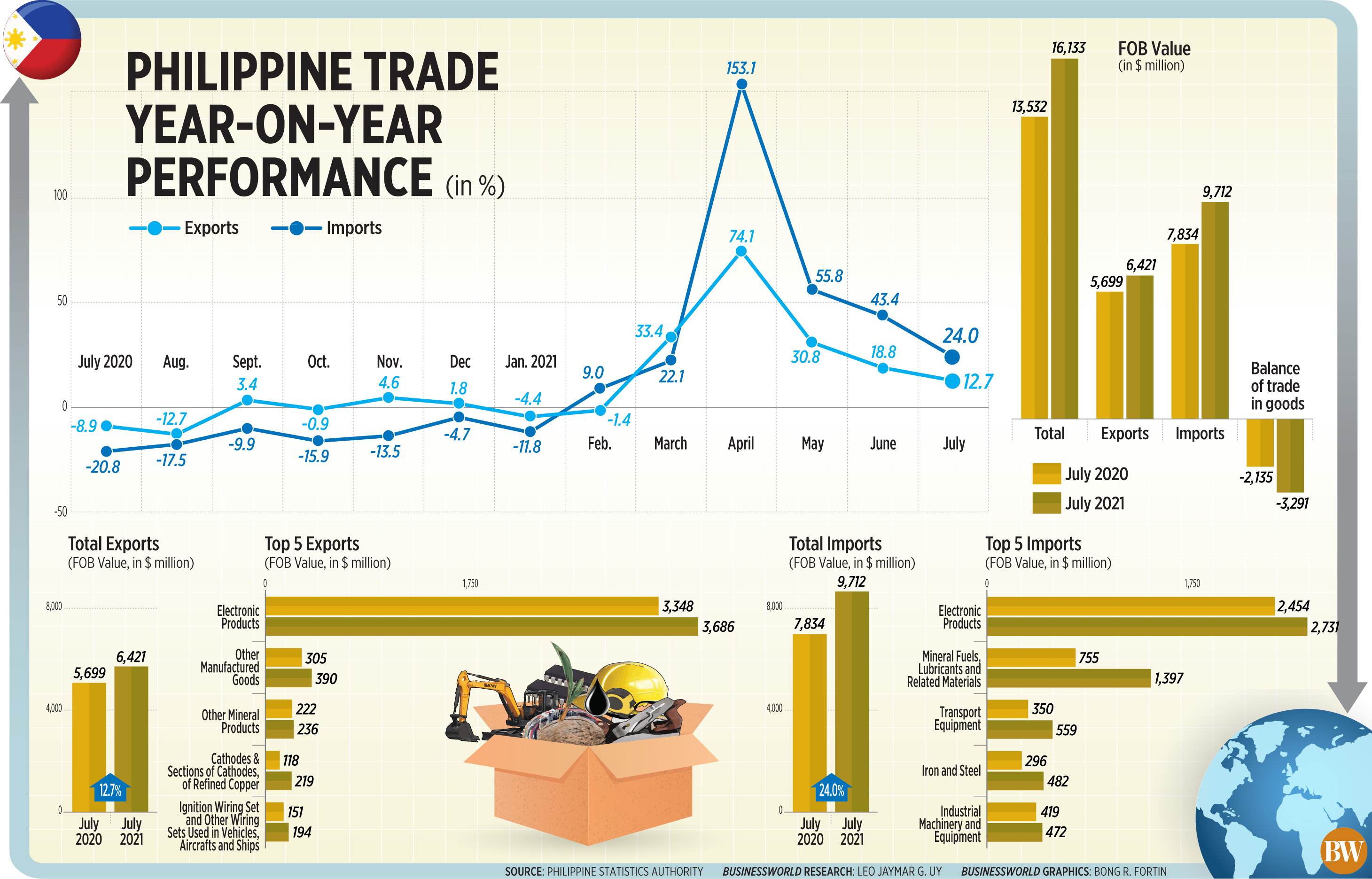 This brought the trade-in-goods deficit to $3.29 billion in July, wider than the $2.13-billion shortfall recorded in the same month last year but smaller than the $3.39 billion gap in June.

In a note sent to reporters, the Department of Trade and Industry (DTI) attributed the rise in exports primarily to the “increased global uptake of semiconductors, electronic data processing products, consumer electronics and telecommunication products.”

“China, the world’s largest copper importer, imported over 555,000 metric tons of copper in July, up 14.24% from the previous month and 89.93% from a year ago. The Philippines also benefited from the increase in the US production of motor vehicles and parts with US companies canceling their usual factory shutdowns in July,” the DTI said.

‘BLOATED’
In a statement, ING Bank N.V. Manila Senior Economist Nicholas Antonio T. Mapa said the country’s latest trade numbers reflect the gradual reopening of the economy amid the ongoing coronavirus disease 2019 (COVID-19) pandemic. He noted, however, the annual increases “may have been bloated due to base effects.”

“Inbound shipments outpaced export growth due in part to increased volume of fuel and as crude oil prices rose over the last year. Meanwhile, the overall trade balance approached [pre-COVID-19] levels and widened further to $3.3 billion in July,” he said.

Ms. Rasid expects overall imports to “trend higher” in the coming quarter, raising demand for US dollars amid firm commodity prices and a gradual economic reopening.

“[T]he shift in government’s stance to a more targeted approach in terms of the lockdown restrictions, a departure from region-wide lockdowns and opting instead for localized lockdowns going forward despite an elevated case count, could provide some acceleration to growth recovery. That said, the timing of such implementation bears watching particularly given the reversal in the plans for the loosening of restrictions this week,” she said.

For ING’s Mr. Mapa, a pullback in trade activity for August is expected following the reimposition of tighter lockdown measures.

“Nonetheless, we forecast import growth to continue to outperform the export sector with the trade deficit likely staying elevated for the balance of the year,” he said.

Mr. Mapa also expects the country’s current account to swing to a deficit as the trade gap approaches pre-pandemic levels.

“Current account deficits, coupled with possible portfolio outflows in the coming months due to the [US Federal Reserve] taper translates to more pressure on the local currency. With the BSP (Bangko Sentral ng Pilipinas) signaling it would refrain from hiking policy rates this year, it looks like the [peso] will remain on the backfoot to close out 2021,” he said.

“Note that seasonally, these are the months when manufacturers get ready for the holiday season demand,” he said in an e-mail.

“We expect trade shortfalls of at least $3 billion every month for the rest of 2021, and imports may well continue to outperform exports. This forecast supports a weaker peso that may well finish this year within the range of P50-51,” he added.

For Asian Institute of Management (AIM) economist John Paolo R. Rivera: “Essential goods would continue to dominate given the still limited income generating capacity of people. Priority would be placed on essentials until the pandemic is arrested and normalcy in jobs are restored,” he said.

“Exports would continue but this is contingent on the requirements by our trading partners that is hinged on their pandemic situation. The external environment is very volatile and trade reacts accordingly despite export/import bills committed.” — BTMG with inputs from Beatrice M. Laforga and Jenina P. Ibañez