THE COUNTRY’S factory output expanded for the fourth straight month in July, the Philippine Statistics Authority (PSA) reported on Thursday.

Preliminary results of the PSA’s latest Monthly Integrated Survey of Selected Industries (MISSI) showed the volume of production index (VoPI) surging 537.9% year on year in July, faster than the revised 459% growth in June and a reversal of the 72.8% contraction a year earlier.

Meanwhile, the value of production index (VaPI), a similar composite indicator in the survey, likewise soared by an annual 528.1%. This was faster than the 444.6% expansion in June 2021, and a turnaround from the 74.1% decline in July 2020. 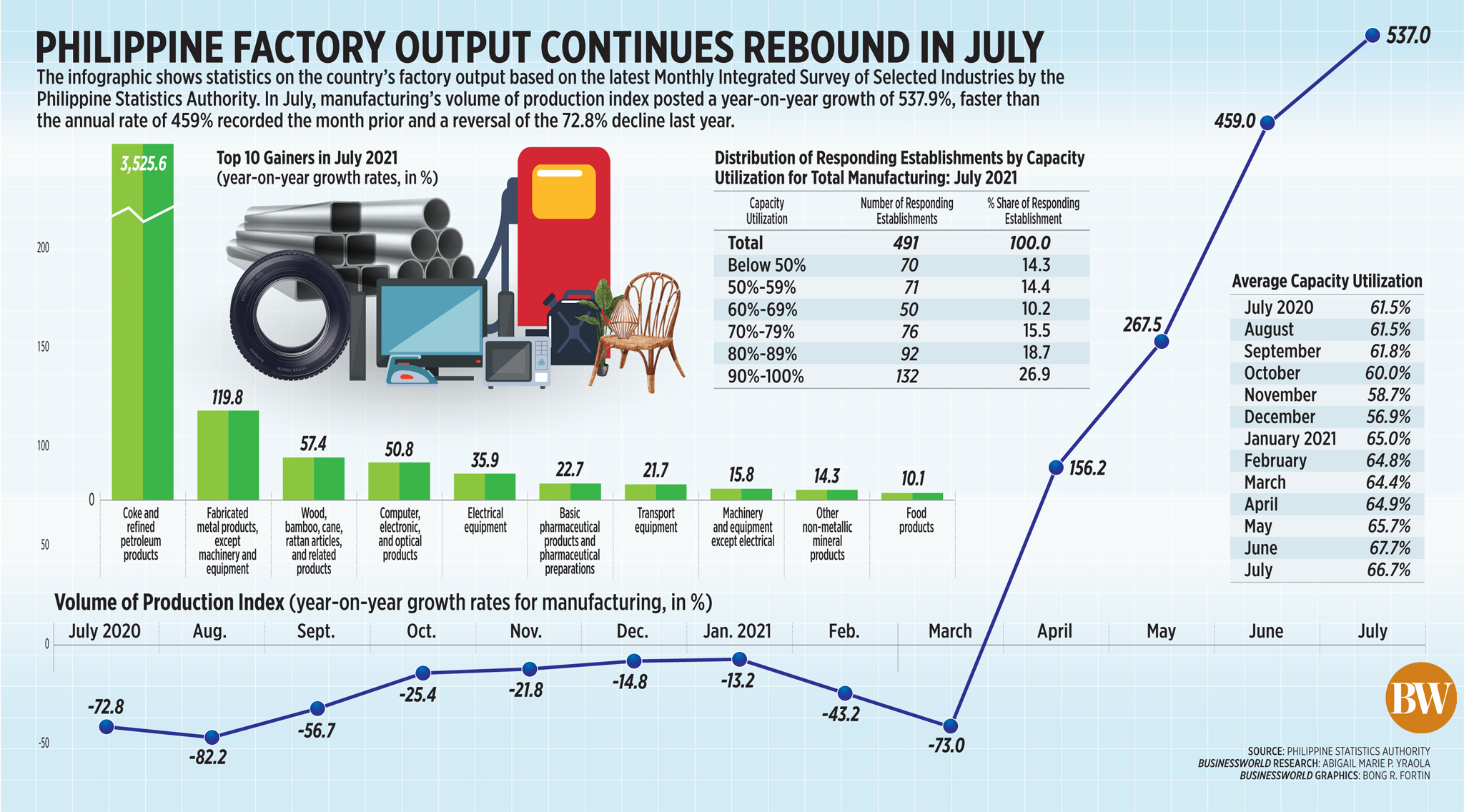 July marked manufacturing’s fourth consecutive month of growth both in terms of VoPI and VaPI following months of decline since last year.

The PSA noted expansion in 14 out of 22 industry divisions in July led by coke and refined petroleum products (3,525.6%); fabricated metal products, except machinery and equipment (119.8%); and wood, bamboo, cane, rattan articles and related products (57.4%).

Among these groups with the highest utilization rates were manufacturers of other non-metallic mineral products (81.1%), tobacco products (78.3%), and furniture (74.1%).

“July was a strong month for most of the economy as community quarantines were mild and mobility managed to recover sharply from their [second-quarter] lows. With orders from international supply chains skyrocketing, we are not surprised that export subsector of manufacturing including semiconductors and chips continue to beat expectations and continue to beat even their pre-pandemic performance,” Bank of the Philippine Islands (BPI) Lead Economist Emilio S. Neri, Jr. said in a Viber message.

In an e-mail, ING Bank N.V. Manila Senior Economist Nicholas Antonio T. Mapa explained the huge growth rates posted in July and the previous months were due in large part to base effects following the significant drop in levels of productions in 2020 when economic activity was put to a near standstill due to strict lockdowns.

“Economic activity has resumed somewhat in 2021 and this explains the outsized gains for  both indicators. It will be a couple of months to truly gauge whether this is growth beyond the bounce,” Mr. Mapa said.

“We continue to expect the manufacturing sector to be lifted by base effects possibly for the whole of 2021. Meanwhile as base effects wane, we could see the VoPI and VaPI number normalize and settle at more moderate expansion contingent on the world economy improving and the domestic economy recovering from recession.”

BPI’s Mr. Neri sees a “meaningful” recovery in manufacturing by October at the latest as vaccination rates increase.

As of the first half, manufacturing grew by an annual 10.4%, beating the entire economy’s 3.7% growth during the same six-month period. Of the 3.7% expansion, manufacturing contributed the largest with 1.93 percentage points.