Consumer prices rose by 4.3%, according to a median estimate of 14 analysts polled by BusinessWorld last week, matching the midpoint of the 3.9% to 4.7% estimate by the Bangko Sentral ng Pilipinas (BSP).

That is faster than the 2.5% inflation a year earlier and the central bank’s 2-4% target for the year, but slower than 4.5% in May, largely due to lower food prices, analysts said. 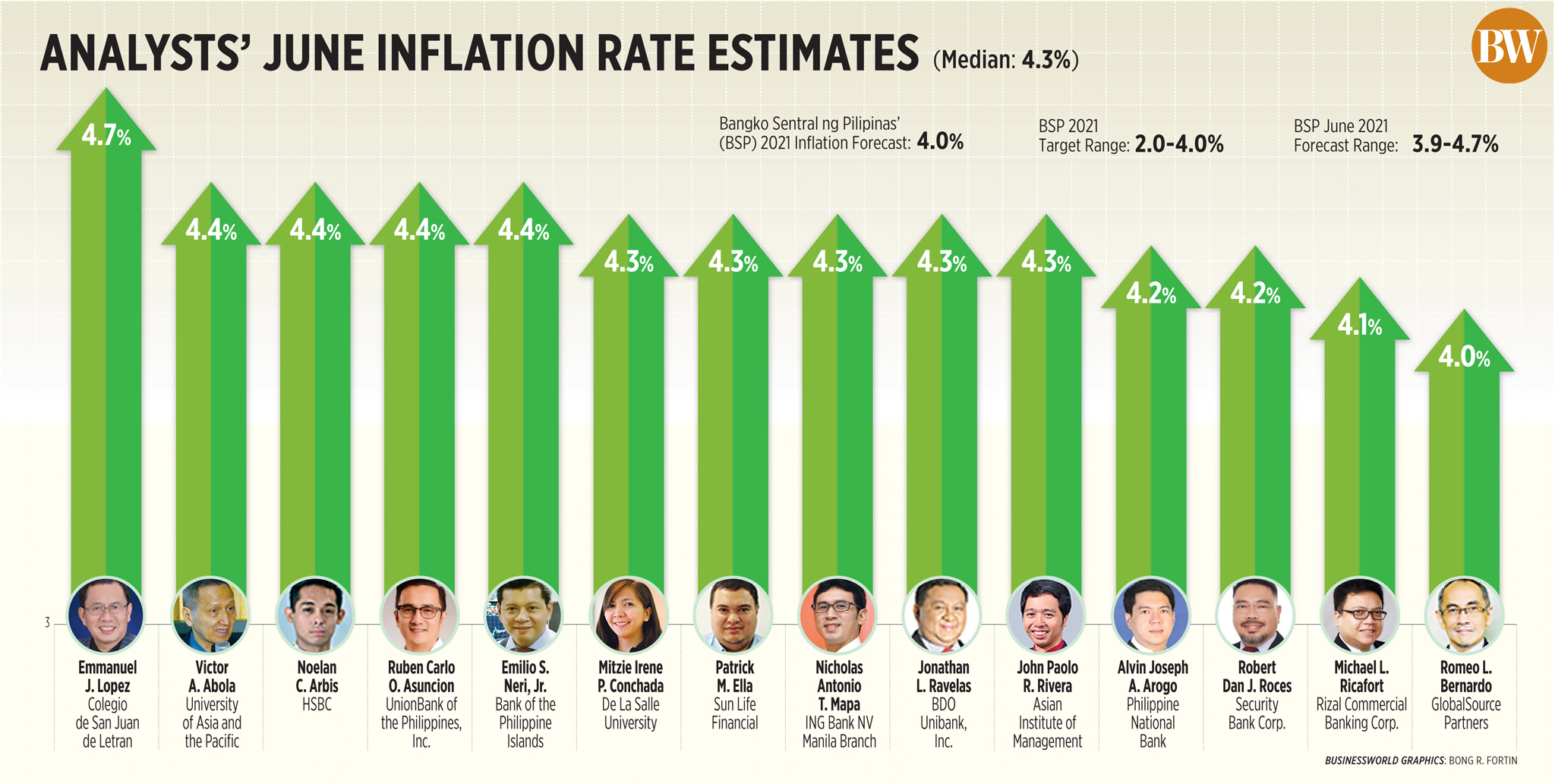 “The temporary reduction in tariff rates for pork and rice would have resulted already to some gradual reduction in local meat prices,” Michael L. Ricafort, chief economist at Rizal Commercial Banking Corp. said in an e-mail.

Food prices have risen in the past months because of tight supply in pork products amid an African Swine Fever outbreak. The government in May raised the minimum access volume and cut tariff rates for pork imports for a year.

The government also reduced tariff rates for rice for the next 12 months to keep prices affordable and increase supply.

Transport inflation could have slowed due to base effects from higher tricycle fares last year, he added.

Electricity rates also went up amid tight supply and increased demand from businesses that reopened amid a coronavirus pandemic, he added.

Gasoline, diesel and kerosene prices have increased by P10.75, P9.25, and P7.70 per liter, respectively as of June 22, according to data from the Energy department.

Anemic domestic demand could have led to slower inflation last month despite higher oil and electricity prices, Ruben Carlo O. Asuncion, chief economist at UnionBank of the Philippines said in an e-mail.

The central bank on June 24 raised its inflation forecast for the year to 4% from 3.9%, saying it had factored in the impact of higher global oil prices and a more favorable global growth outlook. Inflation in the five months through May was 4.4%.

It kept the key policy rate unchanged at a record low of 2% as it vowed to continue supporting an economy threatened by the coronavirus. The overnight deposit and lending facilities were also kept at 1.5% and 2.5%, respectively.

‘BREATHING ROOM’
Easing inflation even if it’s still beyond the target would allow the central bank to keep an accommodative policy it had promised to support economic recovery, said Alvin Joseph A. Arogo, research head at the Philippine National Bank.

“A slower inflation in June, even if still above 4%, could give confidence to the BSP that peak inflation is behind us,” he said in an e-mailed reply to questions. “This would allow for more breathing room for the central bank to remain accommodative amid declining loans and the slow gross domestic product recovery,” he added.

BSP Governor Benjamin E. Diokno has said the central bank would keep an accommodative policy stance “for as long as necessary” and would only consider changes when recovery becomes more sustainable, likely in the second half of next year.

The economy shrank by 4.2% in the first quarter after a record 9.6% contraction in 2020. The government expects the economy to grow by 6% to 7% this year.

Various multilateral lenders and think tanks have lowered their growth forecasts for the country due to lockdowns amid a fresh surge in coronavirus infections.

Bank lending, which boosts trade and commerce, has been declining since December despite record low interest rates. Loans fell by 4.5% in May — the sixth straight month of decline — after dipping by 5% in April.

The central bank has cited the need to keep an accommodative policy given tepid credit activity. But it may pull a surprise increase if elevated inflation persists, said Emilio S. Neri, Jr., lead economist at Bank of the Philippine Islands.

The dollar could rise against the peso too rapidly in the next two months if inflation remains elevated and as second-quarter economic growth exceeds market expectations, he said in a Viber message. “We believe the next Monetary Board decision could tilt towards a mild, preemptive hike.”

The peso closed at the P49-a-dollar level on Thursday and continued to weaken to P49.20 on Friday, its weakest close in nearly a year, based on data from the Bankers Association of the Philippines.

Analysts traced the weaker peso to strong dollar demand as the economy reopens and due to cautious sentiment amid coronavirus concerns.

The policy-making Monetary Board will meet on Aug. 12 to decide on key rates and will have three more meetings this year after that.