MANUFACTURING ACTIVITY in the Philippines expanded in June, snapping a two-month losing streak, as demand and production picked up after quarantine restrictions were loosened, IHS Markit said on Thursday.

The Philippine Manufacturing Purchasing Managers’ Index (PMI) rose to 50.8 last month from 49.9 in May, the first time since March that the index breached the 50 neutral mark that separates contraction from expansion.

“Filipino manufacturers signaled a rebound in operating conditions at the end of the second quarter, led by softer declines in output, new orders, and employment, as well as a renewed expansion in pre-production inventories,” IHS Markit said in a statement. 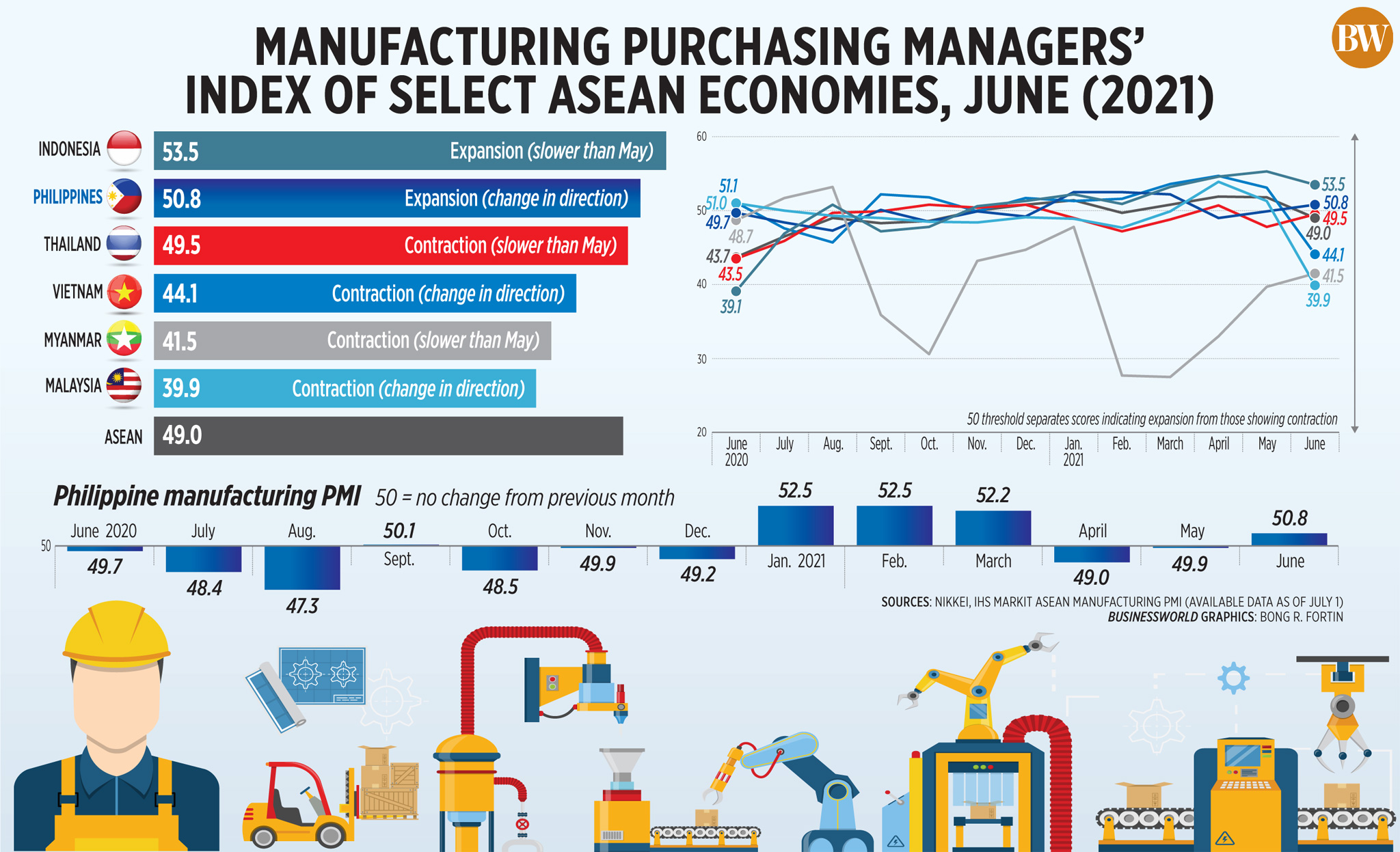 The manufacturing sector’s performance was second best in Southeast Asia during the month, after Indonesia’s 53.5 reading. The Philippines and Indonesia were the only two Southeast Asian economies that saw expansion in June.

The Philippine PMI also exceeded the region’s average of 49, which fell from 51.8 in May.

IHS Markit said the PMI recovery was only “marginal” due to varying levels of quarantine restrictions in some parts of the country, including the capital region.

Metro Manila and nearby provinces remain under a general community quarantine, although some restrictions have been gradually eased as the number of coronavirus infections declined from the peak in April.

PRODUCTION LEVEL
IHS Markit said production levels fell for the third straight month in June, albeit at a slower pace, as muted demand persisted amid the prolonged pandemic.

Weak domestic demand also pulled down new orders, although it was a slight decline and the softest in three months.

On the other hand, IHS Markit noted manufactured goods increased for a second month in a row, thanks to higher-than-average demand from international clients.

IHS Markit said local manufacturers continued to be wary about expanding their workforce since output and demand are still weak. Employment has been on a downtrend since the lockdown started in March 2020, although the recent drop was the softest in three months.

Companies said the job cuts were due to efforts to bring down operational costs and voluntary resignations.

Amid the improving environment, factories started to expand their stocks in June, with input buying activities rising from the contraction seen in the past two months.

Respondents also decided to increase their inventory of pre-production materials to prevent delays when demand starts to pick up over the coming months. Meanwhile, stocks of finished products only went up slightly.

“Manufacturers were once again faced with a more severe lengthening of delivery times from suppliers, however, which was widely linked to stock shortages and port congestions by panelists,” IHS Markit said.

Firms reported higher input costs last month because of costlier transportation and raw materials, forcing some manufacturers to raise the selling prices of their products.

Meanwhile, manufacturers were still optimistic that production will improve in the year ahead on expectations of a rebound in demand.

The level of optimism, however, fell below the series’ average because firms are still wary of the long-term impact of the pandemic.

“With the vaccination program still in the early stages, controlling the spread of the pandemic remains principal to preventing another series of tightening restrictions. Firms in the meantime will hope issues surrounding the supply of materials are resolved,” Shreeya Patel, economist at IHS Markit, said in a statement.

Moving forward, the health of the manufacturing sector will mainly depend on the stringency of lockdown imposed in the coming months, said ING Bank N.V. Manila Senior Economist Nicholas Antonio T. Mapa.

“Easing curbs will likely translate to faster expansion for the manufacturing sector but we must also note that trends can easily reverse once lockdowns are reinstated with the ECQ (enhanced community quarantine) in April reminding us how quickly the sector can revert to contraction even after 3 months of gains,” Mr. Mapa said.

For Rizal Commercial Banking Corp. (RCBC) Chief Economist Michael L. Ricafort, factory activity in the country could continue to expand over the coming months on expectations that the economy will reopen further with its vaccine rollout in place and new coronavirus cases easing.

The Health department reported 5,795 new cases on Thursday, bringing the number of active cases to 51,567.

“[Further economic reopening] would allow more businesses to operate at a higher capacity, including some manufacturing activities and other related and allied industries,” Mr. Ricafort said in a note.

“However, risk factors include the new coronavirus variants that are more contagious… [which] could slow down economic recovery prospects amid risks of lockdowns and travel restrictions locally and worldwide, thereby could also result to slower recovery in manufacturing and imports,” he added.