BENIGNO S.C. AQUINO III, the Philippine president who tried to send corrupt officials to jail and took China to court for its island-building activities in the South China Sea, has died. He was 61.

Mr. Aquino was rushed to the hospital on Thursday morning, Manuel “Mar” A. Roxas II, a close friend and his Interior and Local Government chief, told reporters in a Viber group message. He “passed away after efforts to revive him failed,” he added.

He died peacefully in his sleep at 6:30 a.m. due to renal disease secondary to diabetes, his elder sister Pinky Aquino-Abellada said in a video streamed live on Facebook later in the day.

“He made the fight against corruption his political centerpiece, so much so that his anti-thesis — President Rodrigo R. Duterte — also took up the same slogan strings in his government and during his presidential run,” said Richard Javad Heydarian, professorial chairholder in geopolitics at the Polytechnic University of the Philippines.

“Because of Aquino’s moral politik, it has become closely impossible for any president to not put fighting corruption at the heart of their political vision and agenda,” he said by telephone.

He managed to jail his predecessor Gloria Macapagal-Arroyo and at least three senators for graft, while firing the country’s chief justice for hiding his wealth.

Mr. Aquino, whose political lineage propelled him to power in 2010, ran after tax evaders and unscrupulous officials, giving him more revenue to build roads and schools and boost cash aid to the poor while cutting debt.

These efforts led to investment-grade credit ratings and economic growth exceeding 6% from 2012 to 2014. 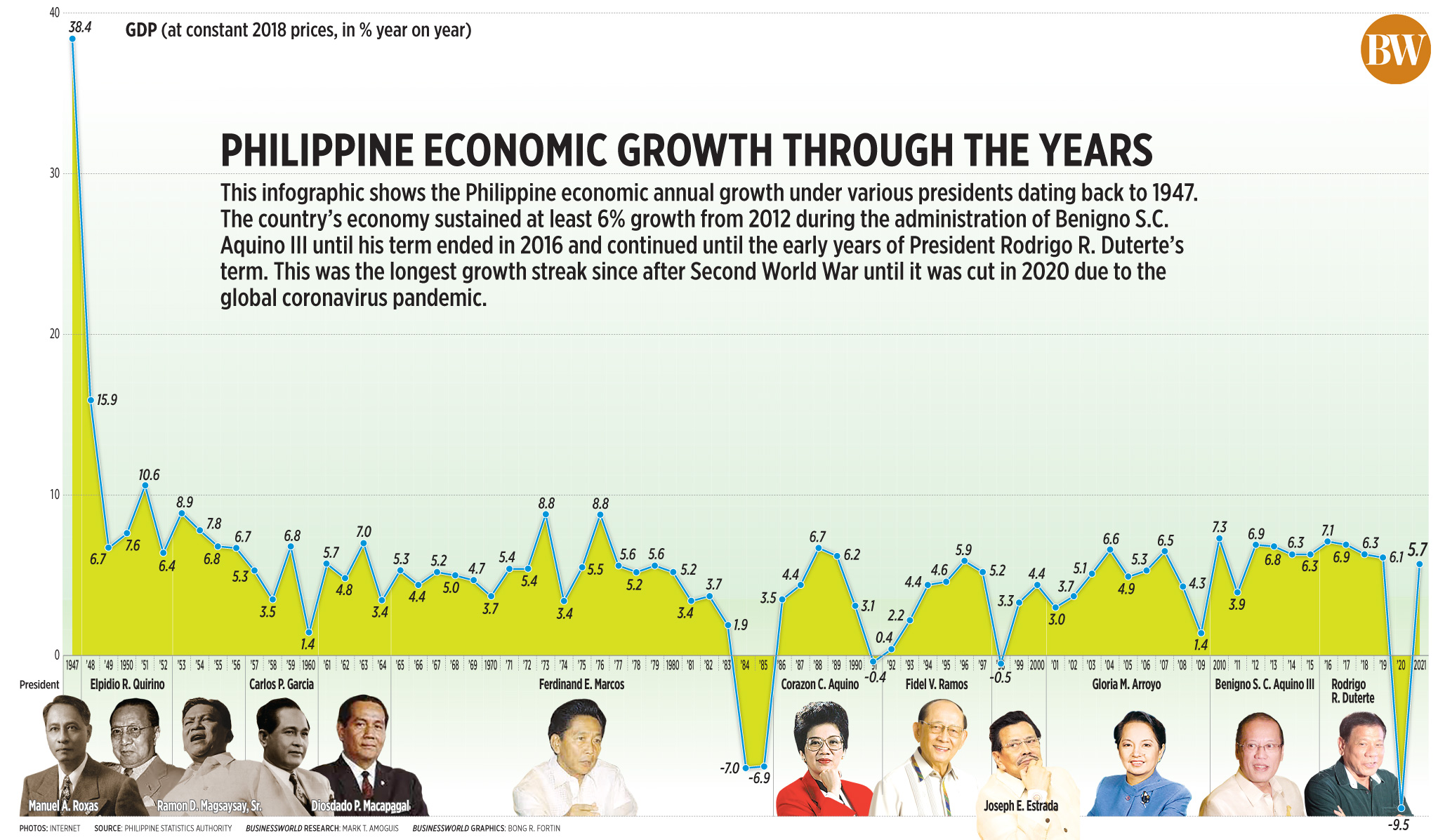 “The turnaround story of the Philippines — from Asia’s sick man to Asia’s bright star — is without doubt one of his greatest legacies,” Cesar V. Purisima, Mr. Aquino’s Finance chief, said in an e-mailed statement. “He left office with a Philippines more optimistic about its future, having ended the vicious cycle of doubt and having entered a virtuous cycle of confidence.”

The Philippines under Mr. Aquino also sued China before an international tribunal for its militarization of the South China. In 2016, the court rejected China’s claim to more than 80% of the disputed waterway based on a 1940s nine-dash map.

“He was the first Asian leader to dare to directly confront China,” Mr. Heydarian said. That arbitration award had set the tone of conversation about the South China Sea and allowed neighbors such as Vietnam to question China by invoking international law, he added.

“Aquino has been a major headache for the Chinese as far as their excessive and unlawful claims and activities in the sea are concerned,” the political analyst and columnist said.

Also part of Mr. Aquino’s legacy was laying down the foundation for the establishment of the Bangsamoro Autonomous Region in Muslim Mindanao after landmark negotiations with Muslim rebels in the country’s south.

“Let us all take this opportunity to unite in prayer and set aside our differences as we pay respects to a leader who has given his best to serve the Filipino people,” Mr. Duterte said in a statement.

“His memory and his family’s legacy of offering their lives for the cause of democracy will forever remain etched in our hearts.”

RISE TO POWER
The son of ex-President and “People Power” icon Corazon C. Aquino was thrust into the political limelight on a massive outpouring of grief following her death in August 2009. He beat his rivals in the presidential race despite a rather undistinguished legislative career.

Mr. Aquino, like his parents, came from pedigreed stock — landed, aristocratic families that have long been part of the ruling elite. His campaign was based on a legacy far greater than his own.

Aside from having the first female Philippine president for a mother, his father Benigno Jr. was the country’s greatest democracy champion before he was assassinated in 1983 presumably by agents of the dictator Ferdinand Marcos. Corazon ended Marcos’s two-decade rule in the popular uprising of 1986.

As soon as he assumed office, Mr. Aquino created a “truth commission” to probe Ms. Arroyo, which the Supreme Court struck down for being illegal. He fired officials whom his predecessor had appointed shortly before her term ended in June 2010, and refused to be sworn into office by one of them — ex-Chief Justice Renato C. Corona, Ms. Arroyo’s former chief of staff.

Less than three months into his term, Mr. Aquino suspended the incentives received by directors of government-owned companies and abolished superfluous agencies under him, including an anti-smuggling office and another dealing with global warming.

Mr. Aquino’s first crucial test came on Aug. 23, 2010 when eight members of a Hong Kong tour group died in a 10-hour police siege of a hijacked bus in Manila.

The Hong Kong government expressed its disappointment with the Philippines for failing to take more serious action against officials who mishandled the crisis, which was broadcast live around the world. Police officers had stormed the bus after negotiations with the hijacker, a disgruntled former policeman, failed.

After the probe, the former leader said Manila’s mayor and two police chiefs would face charges over their handling of the incident. He later fired the deputy Ombudsman for sitting on the plea for reinstatement of Rolando Mendoza, the dismissed police officer.

In December 2011, Mr. Aquino faced criticisms for his government’s lack of preparation for Tropical Storm Washi (Sendong), which killed more than 1,200 people in southern Philippines — the deadliest to hit the country in three years.

He ordered a probe of the government’s response to the disaster as the death toll climbed and promised that there would be “no disaster of this magnitude ever again.”

Mr. Aquino was also criticized for his government’s mishandling of a police raid where 44 commandoes were killed in a clash with Muslim rebels in Mamasapano town, Maguindanao in January 2015.

He later faced charges of reckless imprudence resulting in homicide for the bloodbath. The Supreme Court in 2019 rejected a lawsuit that sought his indictment.

Mr. Aquino’s career as a congressman and senator was rather unexceptional. Among his most notable measures that became law was the creation of a congressional committee to ensure intelligence funds were used properly.

At the Senate, he pushed for a more transparent government procurement process and budget “impoundment,” which allowed the President to block the release of certain funds appropriated by Congress.

Mr. Aquino, the third and only son among five children, was born on Feb. 8, 1960 in Manila. He attended Ateneo de Manila University for his primary, high school and college education. He graduated in 1981 with a Bachelor’s degree in Economics and was one of Ms. Arroyo’s students.

The first bachelor Philippine president, his love life was a constant target of media speculations. Mr. Aquino was a shooting and billiards enthusiast, enjoyed playing video games and was an avid smoker.

Mr. Aquino’s government was marked by “impressive economic growth,” with four credit rating upgrades and a significant increase in foreign direct investments that were aided by his transparency and good governance, the Management Association of the Philippines said in a statement.

“Although his administration had its fair share of challenges, the reforms he initiated in public infrastructure, the Judiciary, education, healthcare and social protections created an engine for progress,” it said. “He generated a new respect for the country on the world stage.”

Benedicto V. Yujuico, president of the Philippine Chamber of Commerce and Industry (PCCI) said economic output grew from an annual average of 4.5% before Mr. Aquino’s term to 6.2% during his six-year reign.

Gross domestic product growth peaked at 7.2%in 2013, when the country was the second-fastest growing economy in Asia after China, he said in a separate statement.

“On the back of his high-profile campaign to weed out corruption and the excellent gross domestic product performance, the inflow of foreign direct investment steadily improved, rising by 60% when he stepped down from office,” he added.

Government transactions were meticulously examined, fiscal management became participatory and transparent and tax collection was improved, he said in a Viber message.

“The low interest rate environment and strong economic growth led to strong double-digit growth in loans,” he said in a Viber message.

Mr. Heydarian, who spoke with Mr. Aquino on the phone two years ago, said the former leader was “very crest-fallen.” “He was really dejected because of the state of affairs in the country and by the political backlash against the whole project that his parents and himself represented.”

Despite his faults, Mr. Aquino “was a transitional leader in the sense that he was a bridge to a sustained period of economic growth and democratic consolidation.” “Unfortunately, his successor was almost the opposite of that.”

“In creating his place in history, each leader can only hope he leaves something better than what he found,” the MAP said. “The Philippines, which President Aquino left behind was indeed a better place.” — with Jenina P. Ibañez

Not all priority workers required to undergo swab tests