THE TOURISM industry’s contribution to the economy plunged to its lowest level in at least two decades in 2020 amid the ongoing coronavirus disease 2019 (COVID-19) pandemic, Philippine Statistics Authority (PSA) data released on Wednesday showed.

Preliminary data compiled by the PSA showed tourism’s direct gross value added (TDGVA) accounted for 5.4% of gross domestic product (GDP) in 2020, down from 12.8% of GDP in 2019.

This was the lowest in at least 20 years based on available data dating back to 2000. The last time the sector posted similar figures were in 2000 and 2002 when it contributed 5.6% to the country’s GDP during those years. 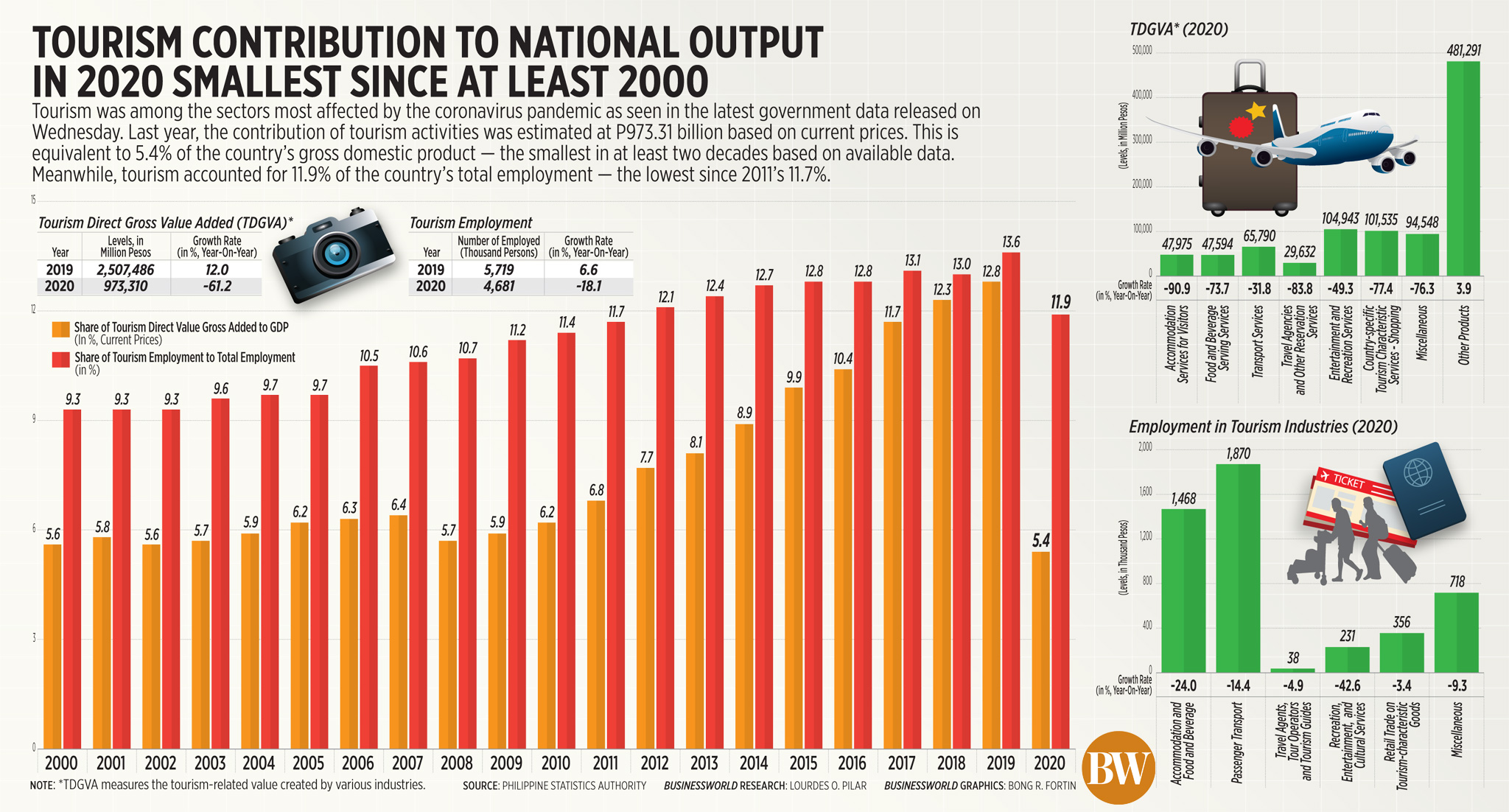 Measuring the tourism-related value created by various industries, the country’s TDGVA was estimated at P973.31 billion at current prices, down 61.2% from P2.51 trillion a year earlier.

The decline in 2020 snapped the sector’s 11 straight years of growth, 10 of which were in double digits.

The TDGVA indicator is based on the results of the Philippine Tourism Satellite Accounts report, which the PSA compiles from the Department of Tourism (DoT).

“The drop of tourism’s share in the GDP was to be expected considering that tourism has been virtually inactive since mid-March of 2020. This was a shame as we were anticipating in further increasing the industry’s share based on the growing interest in the Philippines as a destination,” said Tourism Congress of the Philippines (TCP) President Jose C. Clemente III in a Viber message.

John Paolo R. Rivera, associate director of the Dr. Andrew L. Tan Center for Tourism at the Asian Institute of Management (AIM), noted that prior to the pandemic, the country’s tourism sector has been averaging a 10% growth, similar to growth seen in remittances.

“[However,] the restricted movement of people, border closures, and quarantine protocols halted travel and tourism. The entire value chain of tourism was disrupted,” he said in an e-mail.

Domestic tourism expenditures, which cover spending of resident visitors within the country either as a domestic trip or part of an international trip, plunged 82.3% to P556.89 billion in 2020 from P3.14 trillion in 2019.

OUTLOOK
Mr. Clemente said that they do not expect the sector to return to pre-pandemic levels “until 2023 or 2024.”

“Projections are hard to give at the moment due to the fluid nature of the pandemic and with so many factors in play as well. It’s anyone’s guess right now,” he said.

Mr. Clemente said the TCP, along with other tourism-related organizations and the DoT, has been formulating market strategies to reflect emerging trends in travel that came about as a result of the pandemic.

“We have also been lobbying for the gradual reopening of the tourism industry to fully vaccinate tourists subject to health guidelines,” Mr. Clemente said.

“[W]e are optimistic that tourism will bounce back as our markets have indicated the willingness of people to travel to the Philippines once we can reopen safely,” he added.

Mr. Rivera noted the government’s financial and nonfinancial assistance to tourism enterprises and the “slow and calibrated” opening of tourism and the economy in general.

Among the assistance provided to the sector include the cash aid under the COVID-19 Adjustment Measures Program (CAMP) for affected tourism workers. In May, the Department of Labor and Employment reported that it has already given out P2.6 billion worth of CAMP assistance to over 520,000 tourism workers.

Another is the COVID-19 Assistance to Restart Enterprises for Tourism Rehabilitation and Vitalization of Enterprises and Livelihood program (CARES FOR TRAVEL), of which P6 billion in loans were reserved for tourism enterprises. The program is part of the Bayanihan to Recover as One Act (Bayanihan II).

“Forecasting tourism recovery is dependent on the rate at which the Philippines is vaccinating…. It is definite that domestic tourism will recover first when travel restrictions are lifted. Foreign tourism will follow once borders have been opened again,” Mr. Rivera said.

“Once herd immunity is achieved and the economy can be opened, tourism will naturally follow,” he said.