Consumer price increases steadied for the third straight month at 4.5% in May, matching market expectations.

The figure was within the 4-4.8% estimate by the Philippine central bank for that month and matched the median estimate in a BusinessWorld poll last week.

Year to date inflation was 4.4%, higher than the 2-4% target of the Bangko Sentral ng Pilipinas (BSP) and its revised inflation forecast of 3.9% for the year. May was the fifth month in a row that inflation went beyond target. 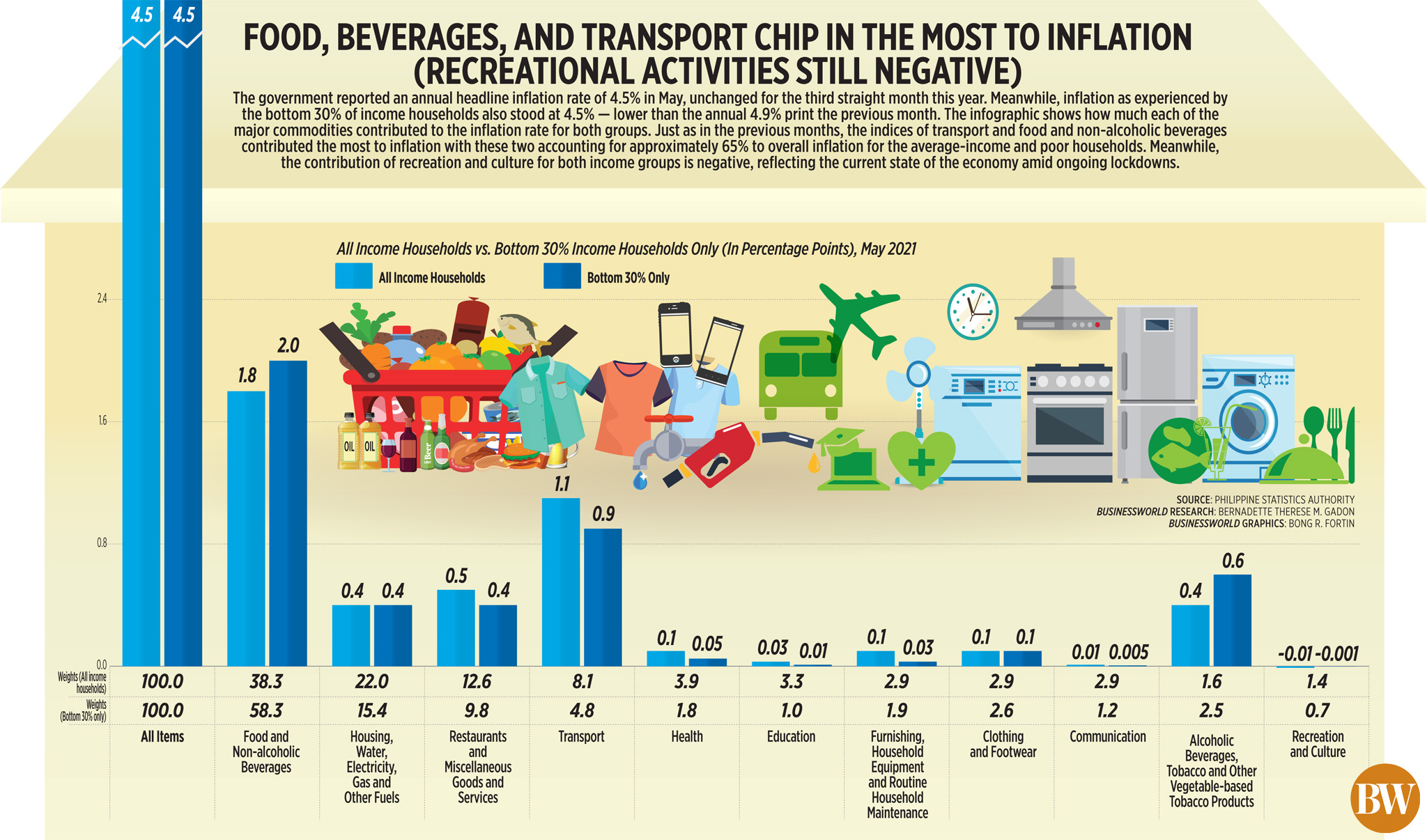 “The BSP remains watchful over the evolving economic conditions and challenges brought about by the pandemic to ensure that the monetary policy stance remains consistent with its price and financial stability objectives,” central bank Governor Benjamin E. Diokno said in a statement on Friday.

He said the latest figure is consistent with expectations that inflation would probably settle near the high end of the target this year before reverting close to midpoint in 2022.

He said risks to the inflation outlook were broadly balanced, including those related to the arrival of pork imports at lower tariffs, the reopening of the domestic economy and the pace of the global economic recovery.

“BSP expects inflation to decelerate to within the target range by the second half of 2021 to 2022 as domestic supply bottlenecks are addressed,” he told reporters in a Viber group message.

Economists said monetary policy settings remained appropriate and are unlikely to be tweaked in the near term.

“Although a host of demand pull and supply forces are currently weighing on inflation, a pullback into the target range is still likely in the coming months,” ANZ Research Chief Economist for Southeast Asia and India Sanjay Mathur and economist Rini Sen said in a report.

This should not have any bearing on monetary policy, “which overwhelmingly remains focused on supporting growth,” ING Bank NV Manila Senior Economist Nicholas Antonio T. Mapa said in a separate note.

He added that the central bank was constrained from cutting policy rates given the above-target inflation, more-than-expected economic decline in the first quarter and anemic bank lending.

Inflation picked up in the indices of restaurant and miscellaneous goods and services (3.8% from 3.4% in April); health (3.2% from 3.1%); and furnishing, household equipment and routine maintenance of the house (2.5% from 2.1%), the Philippine Statistics Authority (PSA) reported on Friday.

The rest of the commodity groups remained unchanged from the previous months.

Food inflation eased to 4.9% in May from 5% a month earlier, though still faster than 2.9% last year.

Core inflation, which is used to determine underlying price trends by removing volatile food and fuel prices, stood at 3.3% in May. This was also unchanged from the annual rate recorded in April, but was higher than 2.9% a year earlier.

Core inflation has averaged 3.4% this year compared with 3.1% a year earlier.

Meanwhile, inflation experienced by the bottom 30% of income households stood at 4.5% in May, slower than 4.9% posted a month earlier but faster than 2.9% in May last year.

Economists mostly traced the steady increase in prices to slower price increases in food and transport, both of which contributed 35.5% and 8.1% to the consumer price index basket.

“Food prices continued to fall sequentially due in part to the government ramping up pork imports to meet domestic demand,” HSBC Global Research economist Noelan Arbis said in a note. “Meanwhile, all other components of the CPI basket moved largely in line, or slightly below their historical trend.”

“Overall, today’s numbers suggest that much of the concerns regarding runaway inflation in the Philippines are behind us,” he added.

“Meat inflation remained the main driver of overall inflation with a 1.4 percentage point (ppt) contribution, similar to the previous month,” he said in a statement. But month-on-month meat prices declined for the first time in eight months by 0.1%, a sign of stabilizing meat prices, he added.

President Rodrigo R. Duterte signed Executive Order 135 to lower the tariff on rice imports to 35% from 40% for a year. He also signed EO 134 to modify the tariff rates on imported pork products.

Earlier, he issued an order raising the minimum access volume allocation for pork imports to 254,210 metric tons (MT) from the previous ceiling of 54,210 MT.

Philippine economic output fell by 4.2% in the first quarter from a year earlier, extending the recession to five straight quarters amid a coronavirus pandemic.

UnionBank of the Philippines, Inc. Chief Economist Ruben Carlo O. Asuncion expects inflation to soften further toward the end of the year. The central bank was unlikely to cut benchmark interest rates despite Mr. Diokno’s earlier comments that the central bank was “open to another cut.”

Alex Holmes, emerging Asia economist at Capital Economics, expects two 25-basis-point cuts in the second half. He also expects the reserve requirement ratio to be cut by 100 basis points.

The central bank’s Monetary Board will hold its next policy-setting meeting on June 24.