One of the basic tenets to achieving a sound taxing system is theoretical justice. In principle, theoretical justice dictates that tax laws should be equitable, that is, they should be based on the taxpayer’s ability to pay. In other words, those who have more should be taxed more. However, this principle is not at all times applicable; for instance, a person who is supposed to receive a property out of the estate of a deceased may end up overdrawn or indebted to the government for waiving his right to a part of his inheritance.

This situation is discussed in Revenue Memorandum Circular (RMC) No. 94-2021 dated July 21 which was issued by the Bureau of Internal Revenue on Aug. 10, clarifying the donor’s tax treatment of an heir’s renunciation of his share from the specific property forming part of the estate of the decedent. While the RMC acknowledges the donor’s tax exemption of the general renunciation of an heir of his inheritance, it also introduces us to the concept of partial renunciation. This can happen when an heir agrees to receive a specific property valued at an amount lower than the value of what should have been his rightful share had all the properties of the decedent been distributed. There is partial renunciation/waiver because an heir is letting go of his share to identified properties only and not his entire share from the estate.

As an illustration, let us assume that a decedent left three real properties to three heirs, with the following zonal values (assuming that these are higher than the fair market values per tax declaration): Property 1 — P4,500,000; Property 2 — P6,000,000; and Property 3 — P3,000,000. Assuming further that all three heirs are entitled to an equal share of the estate, i.e., each one should get a third of all three properties. Thus, each heir should be receiving P4.5 million in value, computed as follows: 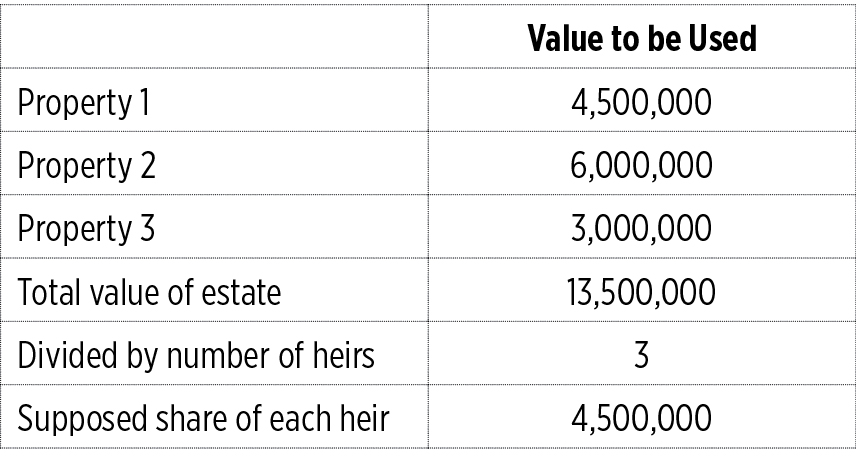 However, suppose the heirs agreed among themselves to split their inheritance so that each one renounces his share in the other two properties and receives only one of the three properties. Accordingly, one heir would be subject to a donor’s tax of P75,000 on the value foregone as a result of the partial renunciation, as computed on the table below: 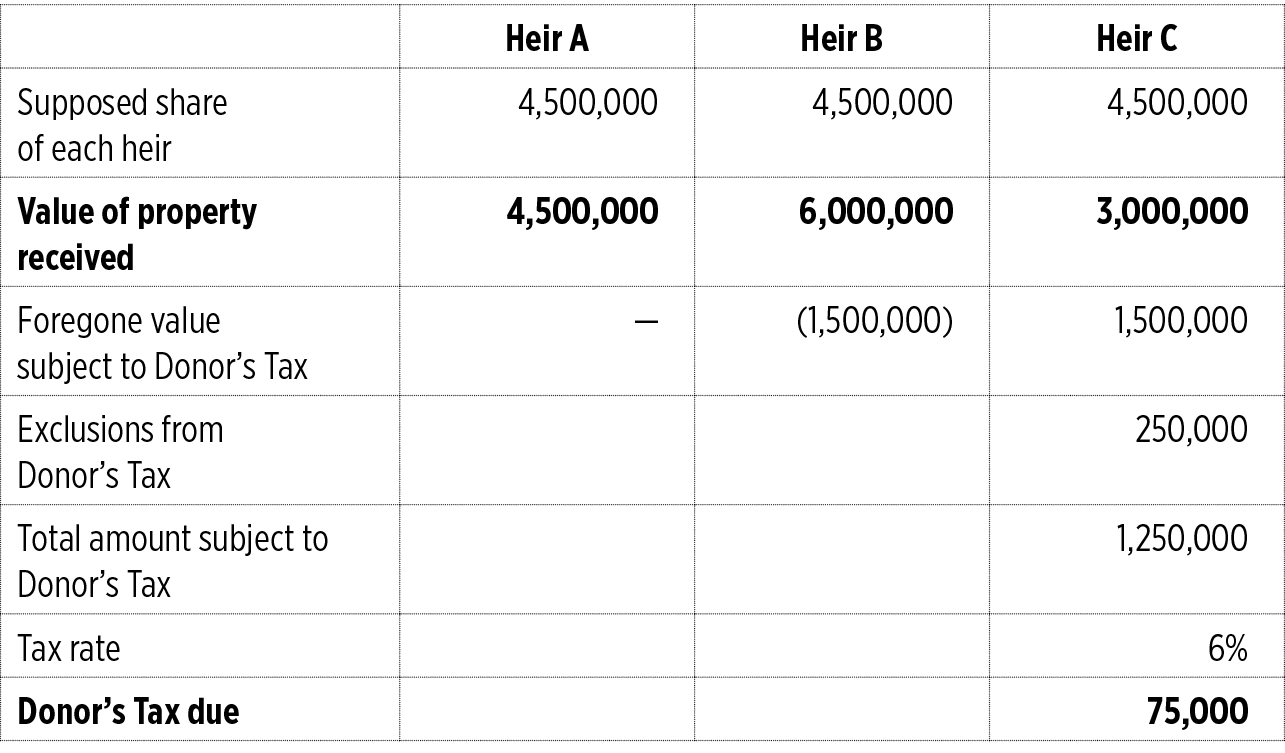 As shown in the computation, the RMC seeks to clarify that the difference between the value of the supposed share of each heir out of the total estate and the value of the specific property received as a result of the partial renunciation is a donation subject to 6% donor’s tax to the extent that it exceeds the P250,000 tax-exempt amount. To some, it would appear that the burden of paying the tax due was shifted to the person who received the least valued property out of the total estate, contradicting the principle of theoretical justice. Imagine yourself letting go of a portion of your supposed property free of charge, resulting in a diminution in the value of your rightful share, but winding up subject to more tax liabilities.

However, unlike income tax which is based on the income received by a person, donor’s tax is imposed on the liberality of the transferor to dispose freely of an identified property as a gift in favor of another, whether directly or indirectly. While the circular imposes the tax burden on the person who receives a lesser share of what he is entitled to, the tax is really on that person’s waiver of his right over a particular property or a fraction of the entire estate. Thus, the seeming irony behind the imposition of the donor’s tax on such waiver is best explained in this wise: The person who renounces his rights as to a particular share out of the entire property of the decedent, in reality, is the one who has the most resources signifying an ability and the means to pay taxes. Consider also that the partial renunciation is done voluntarily so that a bigger share may be available for distribution to the other heirs, thereby waiving the donor’s right to receive the remainder. Such waiver suggests knowledge and intention to relinquish a particular right. Hence, the donor not only has the means but is fully cognizant of the consequences of his decision.

The flexibility of our tax system is evident in this circular’s recognition that donation comes in many forms — whether in an act of giving or a mere waiving of a right. Persons who exercise the privilege to transfer a property to another, directly or indirectly, bear the tax consequences. In other words, gratuity comes with a cost. Theoretical justice should not only be understood as imposing taxes on taxpayers with more income. Instead, equitability dictates that those in better circumstances should assume greater tax liabilities.

The views or opinions expressed in this article are solely those of the author and do not necessarily represent those of Isla Lipana & Co. The content is for general information purposes only, and should not be used as a substitute for specific advice.

Mary Rose Lara is an assistant manager at the Tax Services Department of Isla Lipana & Co., a Philippine member firm of the PwC network.

Wrapping up the year

Advertising and mass media in the digital age

Import incentives under the Bayanihan Act