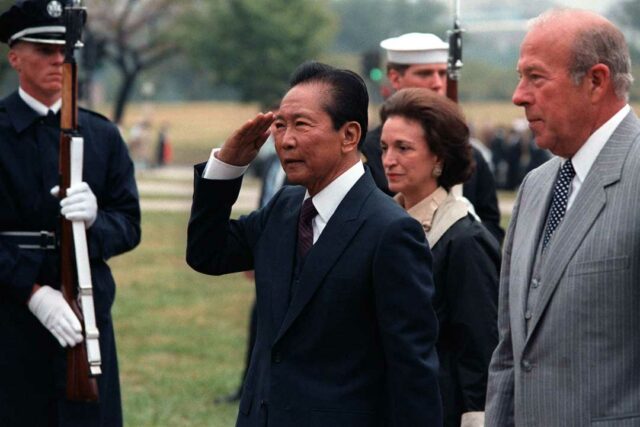 A group of martial victims and political prisoners on Tuesday opposed a bill that seeks to rename an Ilocos Norte university after the late dictator Ferdinand E. Marcos, Sr.

“This is a brazen attempt to deodorize the stink of the dictator… whose blood-soaked regime violated the rights of thousands of Filipinos and plundered the nation’s coffers,” the Samahan ng Ex-Detainees Laban sa Detensyon at Arresto (SELDA) said in a statement.

His rule led to rampant poverty, soaring basic commodity prices and lack of access to basic social services, it added.

Mr. Barba, who is the late president’s nephew, said the bill is based on “a generation that has honored the father and is now ready to honor the son, similar to how a father passes the torch to his son.”

He was referring to now President Ferdinand R. Marcos, Jr., the son of the dictator who won the May 9 election by a landslide.

“We cannot expect the youth to develop nationalism and respect for human rights if we keep on naming public institutions — especially schools and universities — after founders of political dynasties and corrupt government of-ficials, let alone after a dictator who infamously perpetrated massive plunder and committed countless grave human rights violations,” SELDA said.

Party-list Rep. Raoul A. Manuel also opposed the bill during a House of Representatives committee hearing on Tuesday.

He cited laws such as the Human Rights Victims Reparation and Recognition Act of 2013, which acknowledged human rights violations during Mr. Marcos’ two-decade rule.

“Marcos Jr. cannot claim that he is innocent and is off the hook from being liable for the violations inflicted upon us by his father’s bloody regime,” SELDA earlier said in a statement.

More than 70,000 people were jailed, about 34,000 were tortured and more than 3,000 people died under martial rule, according to Amnesty International. — John Victor D. Ordoñez

Work on Cebu container port to start in January

Sales of sugar-sweetened drinks slump in Feb. amid higher taxes