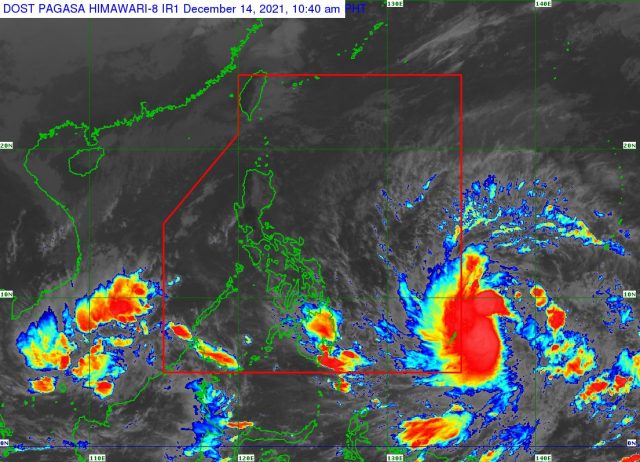 RAI was expected to enter the Philippines later on Tuesday as a severe tropical storm and would start moving westward over the Philippine Sea on Wednesday afternoon, according to the local weather bureau.

The tropical cyclone, which would be named Odette locally, would probably make landfall near the Caraga or Eastern Visayas region by Thursday, it said in an 11 a.m. bulletin posted on its website on Tuesday.

The tropical cyclone was forecast to reach typhoon category on Wednesday and a pre-landfall peak intensity of about 155 kilometers per hour might be reached by Thursday morning or afternoon, it added.

“There is a high likelihood that tropical cyclone wind signals will be hoisted for the Visayas, large portions of Mindanao and several provinces in Southern Luzon due to the threat of strong to typhoon-force winds associated with the passage of Rai,” the agency said.

Tropical cyclone warning signal No. 3 might be hoisted over parts of the Philippines, the weather agency said.

The trough of Rai would bring light to moderate with at times heavy rains over Caraga and Davao Oriental, it said. It might also bring heavy to torrential rainfall over the Visayas, Mindanao and several provinces in Southern Luzon that could cause flooding and rain-induced landslides.

“Coastal inundation due to high waves near the coast and storm surge are also possible for low-lying localities near and along the path of the typhoon,” the agency said.

Residents in the northern and eastern portions of Northern Luzon and the eastern portion of Central Luzon should check updates on possible heavy rainfall.

The Social Welfare department has readied stockpile and standby funds worth P951 million for communities expected to be hit by the storm, the presidential palace said. — Norman P. Aquino and KATA

NFL on track for full season starting on September 10