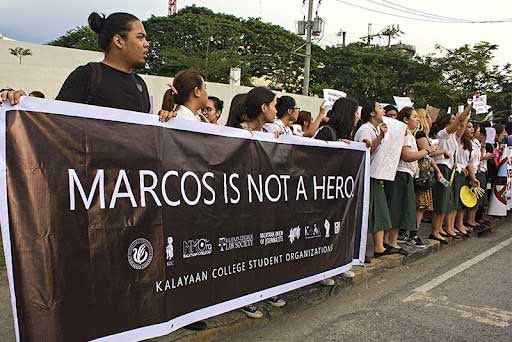 LACK of a nationwide dialogue among Filipinos on the societal implications of martial law has allowed prevailing distortions on what happened during that period of Philippine history, according to a former chief justice.

“There is a lack of association with our everyday experiences with what happened in EDSA,” Former Chief Justice Maria Lourdes A. Sereno said Thursday during a forum held by the Integrity Coalition.

She said there was also a gap in the coverage of the People Power revolution on the role of activism in the fall of the Marcos regime and how it impacted the international community in its aftermath.

“There wasn’t any national conversation (on EDSA and martial law) as the coverage was limited to big personalities,” Ms. Sereno said in Filipino.

“There was a lack of stories on ordinary Filipinos who marched kilometers and were prepared to die to fight for what is right, for freedom and justice.”

The forum focusing on the impact of historical revisionism was held as the country marked five years since the burial of late dictator Ferdinand E. Marcos at the Libingan ng mga Bayani or the heroes’ cemetery.

The former chief justice added that such lack of national dialogue on martial law led to exploitation of issues by those sympathetic to Mr. Marcos, such as the resentment of the poor against the elite and lack of economic opportunities.

She added that information on human rights violations and corruption during the martial law years were only “limited to a small reading population” as only few pages in basic education textbooks were dedicated on the topic.

Ms. Sereno said that Filipinos should “identify as a nation what really happened (during Martial Law) which is not being talked about in schools, churches, and in our barangays.”

“Let’s not make false assumptions that everyone understands the sophisticated nature of democracy. We need to make it understandable to all,” Ms. Sereno said.

Meanwhile, ACT Teachers Party-list Rep. France L. Castro said that the burial of Mr. Marcos at the Libingan ng mga Bayani is a “first of many faults in the education system” under the Duterte administration.

“The dictator’s burial in a ground reserved only for heroes will teach a grave error for the youth today: that Martial Law was the golden age for our country,” she said in a separate statement. — Russell Louis C. Ku

DA lobbies Congress for additional P30 billion in funding for 2022