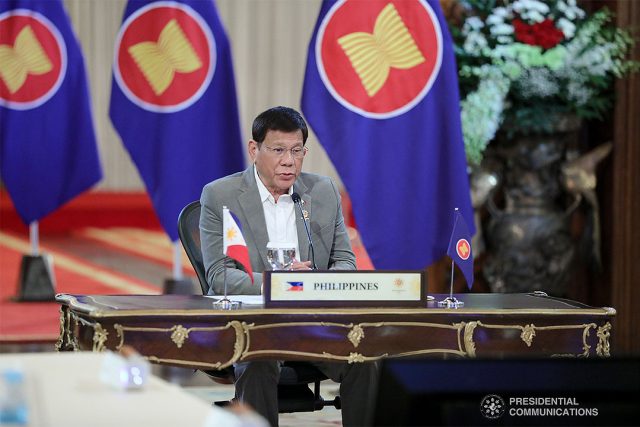 PHILIPPINE President Rodrigo R. Duterte discussed key regional issues — including the South China Sea dispute and Myanmar crisis — in his speech at the summit of southeast Asian leaders, taking a pacifist stance on both concerns.

The tough-talking leader reiterated his call for peace and stability in the South China Sea in accordance with a 2016 United Nations (UN) arbitral ruling that rejected Beijing’s claim to more than 80% of the sea based on a 1940s map, his office said in a statement released Tuesday night.

Last month, Foreign Affairs Secretary Teodoro L. Locsin, Jr. said the Philippines was backing a defense pact that allows Australia to build nuclear-powered submarines using technology that the United States had only previously shared with Britain, saying it could keep the balance of power in the Indo-Pacific region.

“We have come a long way in keeping the peace and promoting prosperity in our region,” Mr. Duterte was quoted as saying. “We must not allow those with diverging interests to make our efforts fail.”

During the Association of Southeast Asian Nations (ASEAN) Leaders’ Summit, Mr. Duterte also reaffirmed his country’s’ commitment to an “effective and substantive” code of conduct in the disputed waterway.

In his speech at the 9th ASEAN-US summit, Mr. Duterte emphasized that the trilateral security partnership between America, Australia, and UK, known as AUKUS,  “must complement and not complicate our working methods for cooperation,” the Palace said separately in a statement.

Mr. Duterte reiterated the strategic importance of a peaceful and stable South China Sea and stressed that “all stakeholders must exercise self-restraint to avoid untoward incidents that may further complicate the situation.”

Citing the rapidly changing regional landscape and seascape, the Philippine leader  emphasized the “importance and need for ASEAN Centrality even as he acknowledged the United States’ “commitment to work with ASEAN, especially on maritime security and domain awareness issues.”

The South China Sea, which is important for the regional ambitions of China, remains as a main source of tension in the Indo-Pacific as the US and other Western countries continue to assert so-called freedom of navigation operations there. The US, which was set to participate in the summit, has been competing with China in trade.

When he took office in 2016, Mr. Duterte led a foreign policy pivot to China

away from the US. Less than a year before he steps down, Mr. Duterte has changed his tone toward the US.

He recently thanked US President Joseph R. Biden, Jr. for donating coronavirus vaccines to the Philippines. He also restored a visiting forces agreement after suspending it for months. The two nations are set to hold more than 300 joint defense activities next year.

On Myanmar, Mr. Duterte called on his fellow leaders in the region to stand with the country in solving its crisis, the Palace said.

Mr. Duterte urged all parties in Myanmar to engage in a constructive dialogue and stressed that the region’s special envoy must be allowed to visit the crisis-laden country soon to meet all relevant parties. — Kyle Aristophere T. Atienza