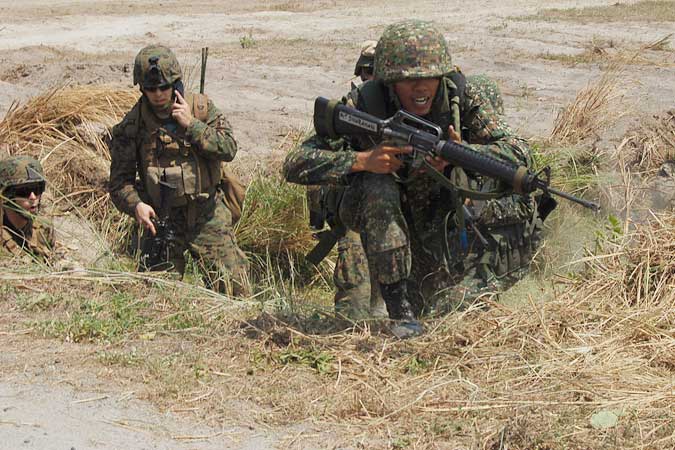 PRESIDENT Rodrigo R. Duterte’s reinstatement of a military pact with the US on the deployment of troops for war games is unlikely to anger China because it never looked at the tough-talking leader’s anti-American sentiment as permanent, political analysts said.

“China has always viewed the Philippines as being in the US corner,” Jay L. Batongbacal, head of the University of the Philippines Institute for Maritime Affairs and Law of the Sea, said in a Viber message at the weekend.

“China has a much more stable and consistent perspective about the Philippines and the US, and Duterte’s antics have never impressed them to change their strategic views or postures,” he added.

Mr. Duterte, who led a foreign policy pivot toward China away from the Philippines’ western allies, recalled a plan to end the visiting forces agreement (VFA) with the US after meeting with US Defense Secretary Lloyd Austin last week.

China is aware that the Philippine Defense department had always remained supportive of the US, said Renato C. De Castro, an international studies professor at De La Salle University.

Mr. Duterte’s decision won’t damage Philippine ties with China because “there is really very little substance to the relationship beyond mutual declarations of friendship expressed by the Chinese government for the President and vice versa,” said Herman Joseph S. Kraft, who heads the University of the Philippines Political Science Department.

“One cannot gain the vaccine diplomacy of China,” he said in a Viber message. “But despite those expressions of great mutual friendship even at the personal level, China has not given the Philippines any special attention and treatment on vaccine rollouts compared with other countries in the region.”

Early in his presidency, Mr. Duterte got about P1.2 trillion in investment and loan pledges from China to boost big-ticket infrastructure projects. But critics said few have materialized.

The reinstatement of the VFA showed that the China appeasement policy did not have full support inside the administration,” Michael Henry Ll. Yusingco, a lawyer and research fellow at the Ateneo de Manila University, said in a Facebook Messenger chat.

“The national security group in particular, clearly bore a deep mistrust of China and likely continued to have the inclination to rely on our traditional ally, the US,” he added.

China has warned the UK’s Carrier Strike Group, led by the aircraft carrier HMS Queen Elizabeth not to carry out any “improper acts” as it entered the contested South China Sea, according to the BBC. Britain is also set to hold military exercises with the US, Australia, France, Japan, New Zealand and South Korea in the Philippine Sea.

The Philippines is expected to take a neutral stance on the UK, Mr. De Castro said, noting that the Philippine policy is to “let the more powerful countries deal” with the sea dispute with China.

“The term is free-riding. You want to free-ride, which means we can benefit from it without being involved,” he said via Zoom Cloud Meetings.

While the multilateral exercise may create tension in the disputed waterway, the country stands to benefit from it, the experts said.

“The Philippines benefits indirectly, because for as long as the South China Sea is used multilaterally and all countries exercise their rights in accordance with international law, it can never become subject to China’s expansive claims of sovereignty and other rights in excess of what is allowed by international law,” Mr. Batongbacal said.

“This ensures that the Philippines will still have the freedom of mobility and access that it needs to protect its interests in the Kalayaan Island Group and its sovereign rights in the West Philippine Sea,” he added, referring to parts of the sea within the country’s exclusive economic zone. — Kyle Aristophere T. Atienza

The case for testing Pfizer’s Paxlovid for treating long COVID