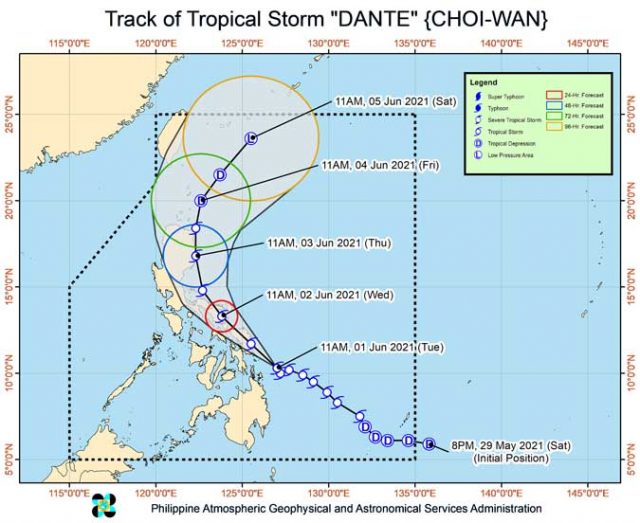 HEAVY rains were dumped by tropical storm Dante, with international name Choi-wan, over central parts of the country as it shifted towards a more westward track on Tuesday, weather bureau PAGASA reported.

In its 2 p.m. bulletin on June 1, the agency raised typhoon signal #2 in a 5-level system over provinces in the Eastern Visayas Region and Bicol. Signal #2 means the storm could bring damaging gale-force winds.

Signal #1 was also up southern parts of Luzon, Central and Western Visayas, and the northeastern side of Mindanao in the country’s south.

The Land Transportation Office’s Bicol office ordered a suspension of travel for all public and private vehicles to avoid long lines towards the Matnog Port and other ports in the region.

“Travel of vehicles bound for the islands of Visayas, Mindanao, Catanduanes and Masbate is hereby suspended starting June 1, 2021 to avoid congestion of vehicles along Maharlika Highway and the Port of Matnog in Sorsogon and all other ports in the Bicol Region,” the agency said in its memorandum.

The suspension will be in effect until typhoon warning signals are lifted, it said.

Sea travel along the eastern parts of the country were also suspended.

At least three people were reported to have died in the regions of Davao and Soccsksargen in Mindanao over the past two days due to flooding and landslides, but the national disaster management agency said the casualties were still being verified as of Tuesday.

As of 2 p.m. Tuesday, Dante was located 125 kilometers southeast of Guiuan town and was forecasted to make landfall over either Eastern Samar or Leyte by Tuesday evening or Wednesday morning.

It was moving with maximum sustained winds of 75 kilometers per hour (km/h) near the center and gustiness of up to 90 km/h. — MSJ