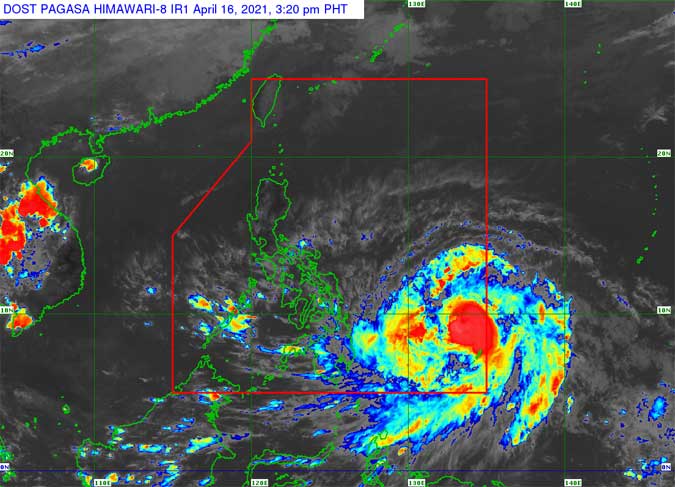 Given the local name Bising, the typhoon is the second to enter the country this year. It is not expected to make landfall, according to PAGASA, but its wide diameter will bring winds and strong rains in eastern parts of the country over the weekend.

“Over the next three days, Bising is forecast to steadily intensify,” the Philippine Atmospheric, Geophysical, and Astronomical Services Administration (PAGASA) said in its Friday morning bulletin.

“It is likely that the winds and heavy rains associated with this tropical cyclone will begin affecting portions of Eastern Visayas and Bicol Region beginning on Sunday,” it said.

Typhoon warning signals, however, were expected to be raised by Friday evening over parts of the provinces of Northern Samar and Eastern Samar.

Bising will bring rough to very rough seas in the eastern seaboards of Visayas and Mindanao over the next 24 hours, PAGASA said.

All land and sea travel bound for Visayas and Mindanao via the Matnog Port in southern Luzon and all other ports are suspended, the Department of Transportation (DoTr) said.

“The DOTr advises trucking/logistics companies and buses not to proceed or postpone their planned trips in order to avoid long queues at Matnog, Sorsogon, to Daraga, Albay,” the advisory issued on Friday said.

DoTr has asked its attached agencies, including the Land Transportation Office and the Philippine Coast Guard, to enforce the travel suspension.

The suspension was requested by the Office of Civil Defense in the Bicol region and was approved by the National Disaster Risk Reduction and Management Council-Emergency Operations Center.

As of 10 a.m. Friday, the typhoon was located 960 kilometers (km) east of Surigao City, Surigao del Norte. It was moving northwest at 15 km per hour with maximum sustained winds of 130 km/h near the center and gustiness of up to 160 km/h. — Marifi S. Jara and Jenina P. Ibañez

TMP ‘not confident’ of meeting 2019 sales target despite end-Sept. climb