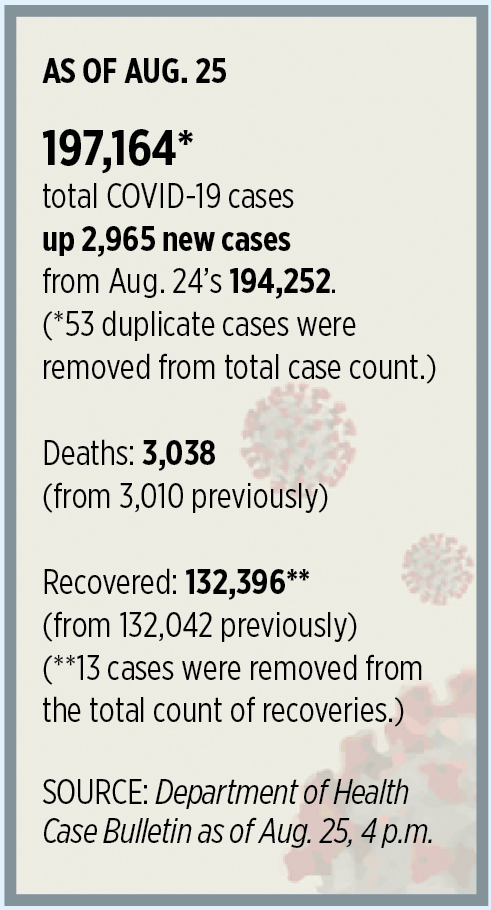 SECURITY FORCES have been placed on red alert in the southwestern Mindanao area following Monday’s twin bombings in Jolo where 14 people died and 72 wounded. The Philippine Coast Guard (PCG) commandant, Admiral George V. Ursabia, Jr., said they are augmenting military and police forces for the implementation of tighter security measures in Zamboanga on mainland Mindanao and the island provinces of Basilan, Tawi-Tawi- and Sulu, where Jolo is located. “PCG K9 units, safety inspectors, and patrol boat operators are directed to be extra vigilant in securing ports, harbors, and other waterways in the region. Several K9 units of the Coast Guard are also ready for deployment as soon as requested by the AFP (Armed Forces of the Philippines),” Mr. Ursabia said in a statement.

CASUALTIES
Meanwhile, the police confirmed on Tuesday that the fatalities consisted of seven AFP personnel, one police special action force member, and six civilians. Those injured were 48 civilians, 18 AFP, and six police. “While we express our heartfelt condolences to the bereaved family of the deceased and sympathy to the wounded, we assure them of our keen resolve and commitment to bring to justice those responsible for this vicious attack,” Police General Archie Francisco F. Gamboa said. The two bombings, using improvised explosive devices, are suspected to have been carried out by members of the extremist and kidnap-for-ransom group Abu Sayyaf. Lieutenant General Cirilito E. Sobejana, head of the Philippine Army, said re-imposing martial law in Sulu could help isolate and track down the Abu Sayyaf network. Martial law was lifted at the end of last year in Mindanao, which includes Sulu, two-and-a-half years after it was imposed to fight Islamic State-inspired militants who took over Marawi City. “The situation dictates, calls for it, with that recent incident with many casualties, to better control the population,” Mr. Sobejana told reporters. “It is wise to declare martial law again.”— with reports from Emmanuel Tupas/PHILSTAR and Reuters

San Miguel gets nod to collect fees for TPLEX Pozorrubio-Rosario

PRIVATE INFRA Dev Corp., a San Miguel-controlled company, has received the green light  from the toll Regulatory Board (TRB) to collect fees beginning Sept. 1 for the Pozorrubio, Pangasinan to Rosario, La Union segment of the Tarlac-Pangasinan-La Union Expressway (TPLEX). For class 1 vehicles such as cars, jeepneys, taxis, and vans, the toll from Pozorrubio to Rosario will be P41, while class 2 vehicles (buses and small trucks) will pay P103. Class 3 vehicles or large trucks and trailers will pay P124. Private Infra Dev, now SMC TPLEX Corp., will start its collection at 12:01 a.m. on Sept. 1, the TRB notice published on Tuesday said.  “Any interested expressway user shall have the right to file, within a period of 30 days from the date of the first publication of the notice, a petition for review of the applicable toll rate for Segment 8 (Pozorrubio, Pangasinan to Rosario, La Union) with the TRB,” it added.

Also on Tuesday, San Miguel Corp. (SMC) said it is hoping that its two projects —  the 420-kilometer South Luzon Expressway Tollroad 5 (SLEX TR5) that will connect Quezon province and the Bicol region and the 19.40-kilometer Pasig River Expressway (PAREX) that will connect the eastern and western sides of Metro Manila — will help boost the economy amid the coronavirus pandemic. “As we said before, San Miguel is fully committed to helping our country overcome this crisis. A big part of that is to continue, and not hold back, on new investments. These projects will deliver hundreds of thousands of jobs and put money in the hands of the Filipinos,”  SMC President and Chief Operating Officer Ramon S. Ang said in a statement. SLEX TR5 will take four years to complete, while PAREX will be three years. — Arjay L. Balinbin

Neighbors Baguio and La Trinidad to synchronize testing of workers

THE LOCAL governments of Baguio City and its neighboring town La Trinidad will coordinate for the targeted testing of residents who cross their border for work. The workers for priority testing are those in supermarkets and banks, which Baguio has tagged as business establishments vulnerable to the coronavirus. “As it is we have lots of employees who are from La Trinidad and the other way around.  This fact is evident in our cases where a number are workers in Baguio but are residents of the town.  And even if they are not statistically included in our tally, they are still included in our contact tracing because most of their contacts are in Baguio,” Baguio Mayor Benjamin B. Magalong said in a statement released Sunday evening.  “As neighbors, we have to work together and protect each other.” Mr. Magalong also said “synchronization and cooperation in this aspect is crucial as both localities and the whole of BLISTT function in a similar ‘eco-system’ and anything that happens in one locality impacts the others. BLISTT, also referred to as the Metro Baguio area, covers the city and the Banguet towns of La Trinidad, Itogon, Sablan, Tuba, and Tublay. Baguio issued directives starting July that requires all banks and supermarkets to conduct company-subsidized swab tests among its workers, and La Trinidad recently released a similar order.