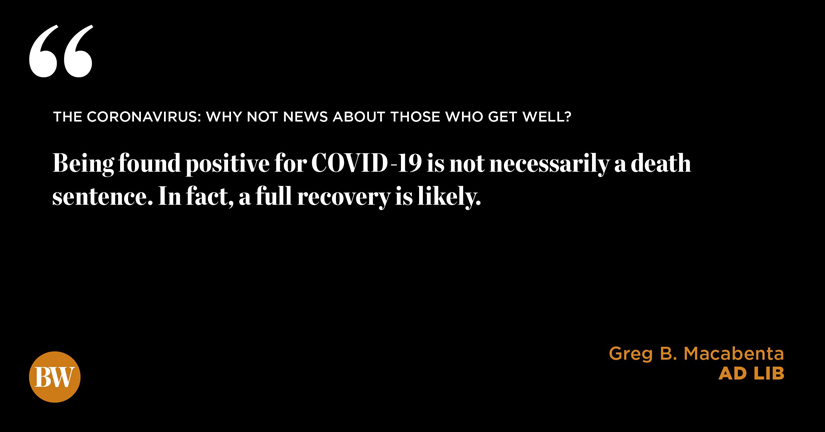 Chris Cuomo, host of the CNN news-commentary program, Cuomo Prime Time, had good news about someone who had been found positive for the strain of coronavirus known as SARS-CoV-2 which causes COVID-19.

The good news was that the patient was recovering.

The World Health Organization (WHO) estimates the COVID-19 mortality rate at 3.4%. That’s the bad news. On that basis, shouldn’t it be good news that 96.6% of those infected survive? Even in Wuhan, China, where the disease first began to spread, the mortality rate was 4.9% early on.

In other words, being found positive for COVID-19 is not necessarily a death sentence. In fact, a full recovery is likely.

In this millennium, the world has experienced two other coronavirus epidemics — and we survived. In the fall of 2002, the world reeled from the spread of SARS-CoV or Severe Acute Respiratory Syndrome, a type of coronavirus (named after its crown-like spikes). The SARS epidemic, which was reported mainly in China, Taiwan, Hong Kong, Singapore, and Toronto, was brought under control by the middle of 2003 — or in less than a year — “by means of syndromic surveillance, prompt isolation of patients, strict enforcement of quarantine of all contacts and, in some areas, community-level quarantine. By interrupting all human-to-human transmission, SARS was effectively eradicated.” (Source: online report). Vaccines have since been developed but research continues.

In 2014, another type of coronavirus called MERS-CoV or Middle East Respiratory Syndrome, was traced to Saudi Arabia. Only two confirmed cases of MERS infection were identified in the US, while more than 1,300 tested negative. However, in the Middle East, three or four out of 10 infected died of the ailment, making the mortality rate, as a percentage of those infected, alarmingly high

In an online report, the mortality rate of MERS, was estimated at 34%, while that of SARS was 9.6%. Both are considerably higher than the 3.4% death rate of COVID-19. However, because SARS was contained within a year and the incidence of MERS was mainly in the Arabian Peninsula, they did not cause the panic we are now witnessing.

In contrast, the impact of the COVID-19 epidemic has been worldwide, thousands have been infected, and hundreds have died. And because of lack of information, it has made everyone fearful, like being afraid of the dark

SARS and COVID-19 are said to be similar in many respects. The difference, according to experts, is in the latter’s transmissibility (it is transmitted more rapidly and, therefore, is more contagious). Worse yet, the mild outward symptoms can be deceptive, making those positive for the virus less aware of the danger of infecting others — until it is too late.

This makes pre-emptive testing imperative. We should not wait to get sick before being tested! The problem in the US, however, is finding a testing facility — although the federal government has vowed to solve that. Meanwhile, because of the inadequate number of testing kits, health authorities have advised that only those showing symptoms should be tested. This is one cause of anxiety and panic. In contrast, one can have a flu vaccination even without flu symptoms. Remember the adage, “An ounce of prevention is better than a pound of cure”?

The median incubation period of COVID-19 is estimated to be 5.1 days. According to studies, “under conservative assumptions,” 101 out of every 10,000 cases will develop symptoms, within 11.5 to 15.6 days of active monitoring or quarantine.” This explains the 14-day quarantine period that health authorities require.

The race is now on to develop a vaccine for COVID-19. But authorities calculate that it will take at least 18 months to develop one and get it cleared for use on humans. However, authorities believe that the ailment can be mitigated with the SARS vaccine. Here’s what one online report states:

“Researchers in the US have mapped a SARS-CoV-2 protein, which could help use drugs developed to treat SARS coronavirus as effective treatments for the new COVID-19 disease… the Nsp15 protein from SARS-CoV-2 is 89% similar to the SARS-CoV protein. Previous SARS studies published in 2010 show that Nsp15 inhibition can slow viral replication, offering hope for the use of Nsp-15-targeting drugs to treat COVID-19. Mapping of a 3D protein structure allows better insights into the virus’ replication in human cells.”

But what is even more reassuring is an authoritative article in UCHealth Today, a publication of the University of Colorado Hospital (ranked America’s best in Pulmonology), that stated that “most people who fall ill recover within two weeks. People with more severe cases generally recover in three to six weeks.”

Health authorities stress, however, that the disease is “very contagious.” This is one reason why people are panicking in the US. But the bigger reason is lack of sufficient knowledge about the epidemic, the inadequate testing capability, and the incompetence of President Donald Trump. Unfortunately, the hysteria has been made worse by media reports on the number of those infected and the number of fatalities, with little or nothing said about those who have recovered.

Of course, raising false hopes is not helpful either. But the facts should be stated clearly, objectively and credibly. It, therefore, doesn’t help to have a president who habitually lies.

Health professionals have cautioned older people about their greater vulnerability to COVID-19. The death rate for seniors is much, much higher. The elderly, especially those with heart, lung, and immunological conditions, are more susceptible to infection. In one senior facility, all those who had succumbed to COVID-19 already had a respiratory or other ailment.

In other words, the younger and healthier a person is, the greater the chances of recovery. But doctors advise against taking the ailment for granted. Even NBA players have been found positive after exposure to infected parties. And the flu, with a mortality rate of less than 1%, can still cause death (UCHealth Today points out that the flu is a strain of coronavirus).

It is best to avoid crowds; and best to wash hands with soap and warm water; use a disinfectant on hands, on door handles and on high traffic surfaces; avoid touching your face; and cough and sneeze into a tissue, and properly discard it. Most of all, it is best to be tested.

At any rate, the prospect of recovery from COVID-19 does not justify the idiotic comments of Trump when the coronavirus red flag was first raised in the US.

Trump has since done an about-face. In his message to America on Wednesday, March 11, he advised people to “stay home” if they were sick or had symptoms. From calling the alarming reports a hoax, Trump also declared a national emergency on March 13 and mustered both government and private sector resources to contain the virus.

Perhaps, much of the hysteria caused by COVID-19 would have been avoided if China had been more transparent concerning its surge in Wuhan; if Trump had avoided making idiotic remarks, and had displayed effective leadership in confronting the crisis; if more intelligent information about the epidemic had been promptly disseminated; and if adequate testing capabilities had been immediately marshalled.

To a large extent, the panic could have been minimized if media had provided more balanced reports, telling the good news along with the bad.

Unfortunately, the tendency to sensationalize may be ingrained in every media person. In Journalism school, this is what’s drilled into the heads of aspiring reporters:

“What is news? Dog bites man is not news. Man bites dog is news.”