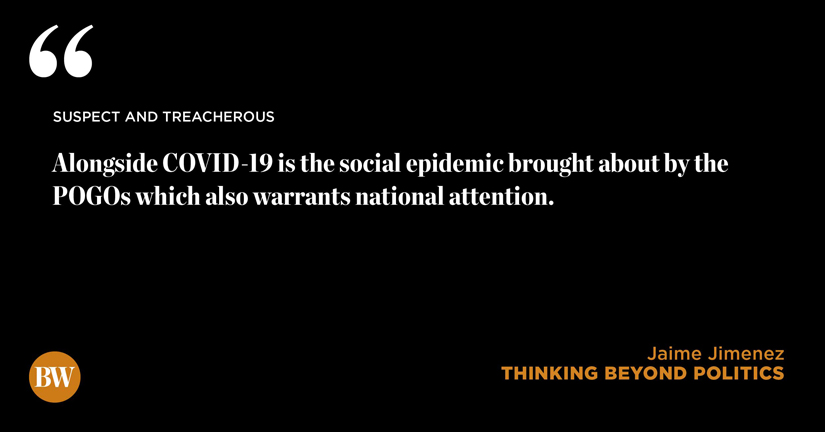 In as much as the country is in limbo about the circumstances and consequences brought about by the COVID-19 pandemic, the government needs to consider two equally important national concerns.

The first concern refers to the condition or the protection and welfare of the health workers who are in the frontline of dealing with the current plague. As our health workers are continuously put in the firing line, government and the people must provide them with the much-needed protection equipment and gadgets, and most of all, recognition due for their heroic work.

But alongside COVID-19 — something which started even before this disease came into existence — is the social epidemic brought about by the Philippine Offshore Gaming Operators (POGOs) which also warrants national attention.

Unlike the virus, the Anti-Money Laundering Council (AMLC) early on rated the casino sector as a high-level risk in terms of money laundering. In 2017, President Rodrigo Duterte signed into law Republic Act (RA) No. 10927, known in local parlance as the “casino law.” The law designates casinos, including Internet- and ship-based ones, as covered persons under the Anti-Money Laundering Act of 2001, as amended. On account of suspicious transaction reports from 2013 to 2019, the sectoral risk assessment revealed that the estimated value of proceeds, involving Internet-based casinos and service providers (SPs), amounts to P14.01 billion (http://www.amlc.gov.ph/).

To date, the distress brought about by POGOs manifests across the social, political, and economic lives of Filipinos and the government. The following societal concerns are noteworthy.

Online gaming is illegal in China and despite repeated warnings, the Philippine government continues to tolerate the existence of these foreign operators. Worse, these are linked to illicit activities such as gambling, tax evasion, kidnapping, drug trafficking, prostitution, and money laundering. Several hotels and condominium buildings were raided in Makati recently for being used as fronts of prostitution by alleged Chinese syndicates. Aside from being well-funded, they are claimed to be bribing immigration personnel to sneak in illegal workers and young women from different Asian countries.

The AMLC, in a recent Senate hearing, said it flagged P14 billion in “suspicious transactions” within a two-year period in connection with POGO operations. Senator Richard Gordon, after discovering that some $633 million in suspected illicit funds or dirty money was brought into the Philippines from September 2019 to February 2020, described the situation as “bureaucracy at its worst.”

In particular, three risk assessments related to POGOs have been undertaken by the AMLC. “the National Risk Assessment in 2017, and the next two were about the financial impact through the financial flow analysis and the second is the anti-money laundering/counter-terrorism financing (AML/CTF) risk brought about by POGOs. Based on these assessments, the AMLC recommended as follows: increasing the level of AML/CTF effectiveness of compliance and supervision through training and workshops; revisiting supervision of Internet-based casinos and SPs; conducting a regulatory assessment, and enforcing actions; and reevaluating licenses of Internet-based casino operators and certificates of authority/operation issued to SPs. Part of the recommendations is to include SPs as covered persons within the company service provider sector definition under the Anti-Money Laundering Act of 2001, as amended” (http://www.amlc.gov.ph/).

But instead of strictly regulating POGOs to severely curb their damaging impact on Philippine society, if not banning them altogether, government has other things in mind.

The government is currently persecuting the country’s largest local conglomerates that employ Filipinos, while abetting the so-called POGOs who do not contribute to local employment.

The situation brings into the fore this disturbing question: Why is government punishing job-generating and tax-paying local conglomerates such as Manila Water Co., Maynilad Water Services Inc., and ABS-CBN Corp.?

At the ground, these local conglomerates have a legacy of achievements. They employ hundreds of thousands of well-paid workers across the country and contribute billions of pesos in taxes each year, boost consumer spending, and help strengthen government finances, and support economic growth. Yet, government officials and lawyers linked to the Duterte administration are trying to put them out of business or existence.

While the House of Representatives asked the National Telecommunication Commission (NTC) to provide ABS-CBN a provisional authority to operate while a new legislative franchise is being heard, pro-Duterte lawyer Larry Gadon asked the Supreme Court to prevent House Speaker Alan Peter Cayetano and NTC Commissioner Gamaliel Cordoba from implementing the notice of extension on the permit of ABS-CBN.

It is obvious that the government and its allies are intent on putting a legitimate company out of business, to the detriment of a multitude of workers and their families.

To punish our legitimate local tax paying and employment-generating companies that directly make lives better for thousands of Filipinos on the one hand, and to facilitate foreign gaming companies that fudge taxes and encourage criminal activities on the other hand, is suspect and treacherous.