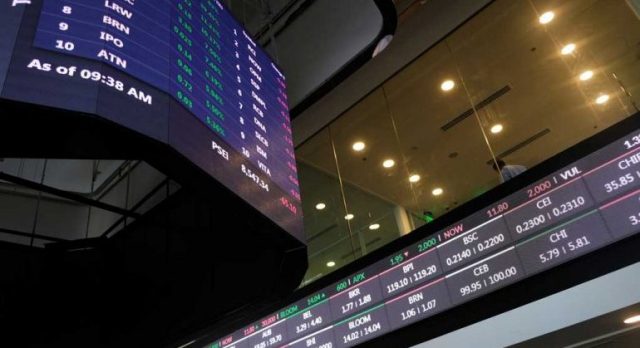 “The PSEi closed higher as investors returned to the Philippines after US stocks pulled back after the June inflation data accelerated unexpectedly,” Regina Capital Development Corp. Head of Sales Luis A. Limlingan said in a Viber message. “Locally, sentiment got a boost from the improvement in remittances and auto sales data.”

Net foreign selling fell to P170.11 million on Wednesday from the P1.03 billion logged on Tuesday.

Cash remittances rose by 13% to $2.382 billion in May from $2.106 billion year on year, preliminary data from the Bangko Sentral ng Pilipinas showed. This was the fourth straight month of growth since January’s 1.7% contraction.

Meanwhile, vehicle sales surged by 44.8% in June compared with the same month last year. According to a joint report by the Chamber of Automotive Manufacturers of the Philippines, Inc. and Truck Manufacturers Association, the figure is equivalent to 22,550 units versus last year’s 15,578 units.

On the other hand, the S&P 500 and Nasdaq ended lower on Tuesday after hitting record highs earlier in the session, with investors digesting a jump in consumer prices in June, Reuters reported. Data indicated US consumer prices rose by the most in 13 years last month, while so-called core consumer prices surged 4.5% year over year, the largest rise since November 1991.